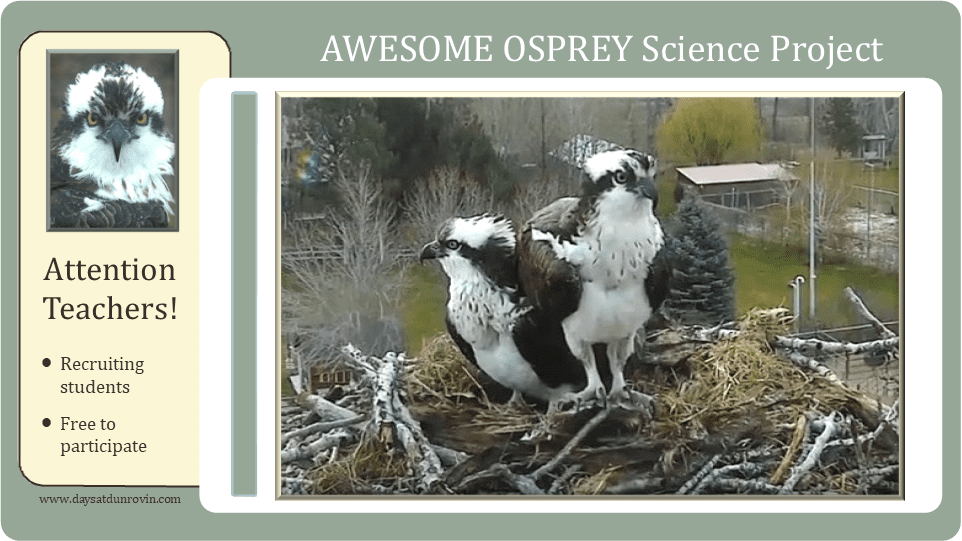 Early in the spring of 2012, Dunrovin Ranch received an email from the principal of a school in Santa Anna, California saying that all 700 of their students were watching the Dunrovin osprey nest. SuzAnne got so excited at the thought of school kids learning about ospreys that she created the Awesome Osprey Project in 2013. The project brought school kids with senior members of the [email protected] community together to research the question of how much time the male osprey spends incubating the osprey eggs relative to the female. The project drew the attention of 54 different classrooms across North America and everyone reports having great fun learning about the ospreys and getting to know one another. The Awesome Osprey was repeated in 2014, but had to be canceled for 2015 when the male bird was killed by an eagle. The project was restarted in 2018 and will continue as long as the ospreys return.

This three week collaboration consists of participants collecting primary data from observation of the birds during the egg incubation period. During the first week of the project, participants  learn to distinguish the male bird from the female and to identify and understand different bird behaviors, such as preening, tending eggs, and incubating. Week two consists of observing the osprey via the Dunrovin osprey webcam and recording data according to an established sampling protocol. At the end of week two, participants enter their data into a Survey Monkey for Dunrovin to compile into a master data spreadsheet that is immediately returned to them for analysis during week three. People of any age or grade can participate.