BROADCAST: Tuesday August 4, 2020 9:30 AM  One of our riders, Colleen, will not be able to attend for the next two weeks as she is off checking out Tulane University for graduate school. While we will miss her, the Horsing Around sessions will continue without her!

Arena Riding with a Plan

It seems that the ospreys take notice!

Recently Dunrovin received the following in an email from a viewer: "It was amazing to watch the horses going through their paces yesterday and to see the chick standing upright now and going for a little walkabout to see the action herself." Who knew!

Razz and I are certainly coming along with our bonding, but I feel as though we are leaving the “honeymoon stage” and will begin to test each other to work on our faults. Razz isn’t the type of horse to let you be a bad rider. He will let you know when he’s being pulled on too much, when you’re not releasing pressure at the right moment, and when you’re giving him mixed signals. He has a dominant personality and tries to get away with taking off toward the center of the arena, which is something I’ve been learning to proactively avoid by keeping my inside leg on him in the corners of the arena, especially by the osprey nest where he likes to take off. If he does take off, I have been vigilant with immediately getting him back to the rail and both of us back on track.

Going into the arena with a five-step plan helped us establish a routine where I am in charge and he is there to listen to me tell him where to go.

We did great on every task except for backing up. Other times I have ridden Razz he listened to me and backed up when asked, but this time was different. I couldn’t get him to back up along the rail nor in the center of the arena. SuzAnne had me give gentle tugs on his reins, then when he gave me one step, release pressure. She saw that my release was not timed correctly for him stepping back and that I was frustrating and confusing Razz. This is something I’d like to work on more with him, and figuring out exactly when he needs pressure released to know he is doing what I ask of him.

The rest of the lesson went fairly well and we learned new drill movements, like working in pairs where you and a partner are “tied together” at the stirrups. This makes for an interesting group dynamic and looks really cool when we all turn at the same time! We all had a few fumbles when it came to trooper and file movements, confusing the commands “to the rail” and “at the rail.” 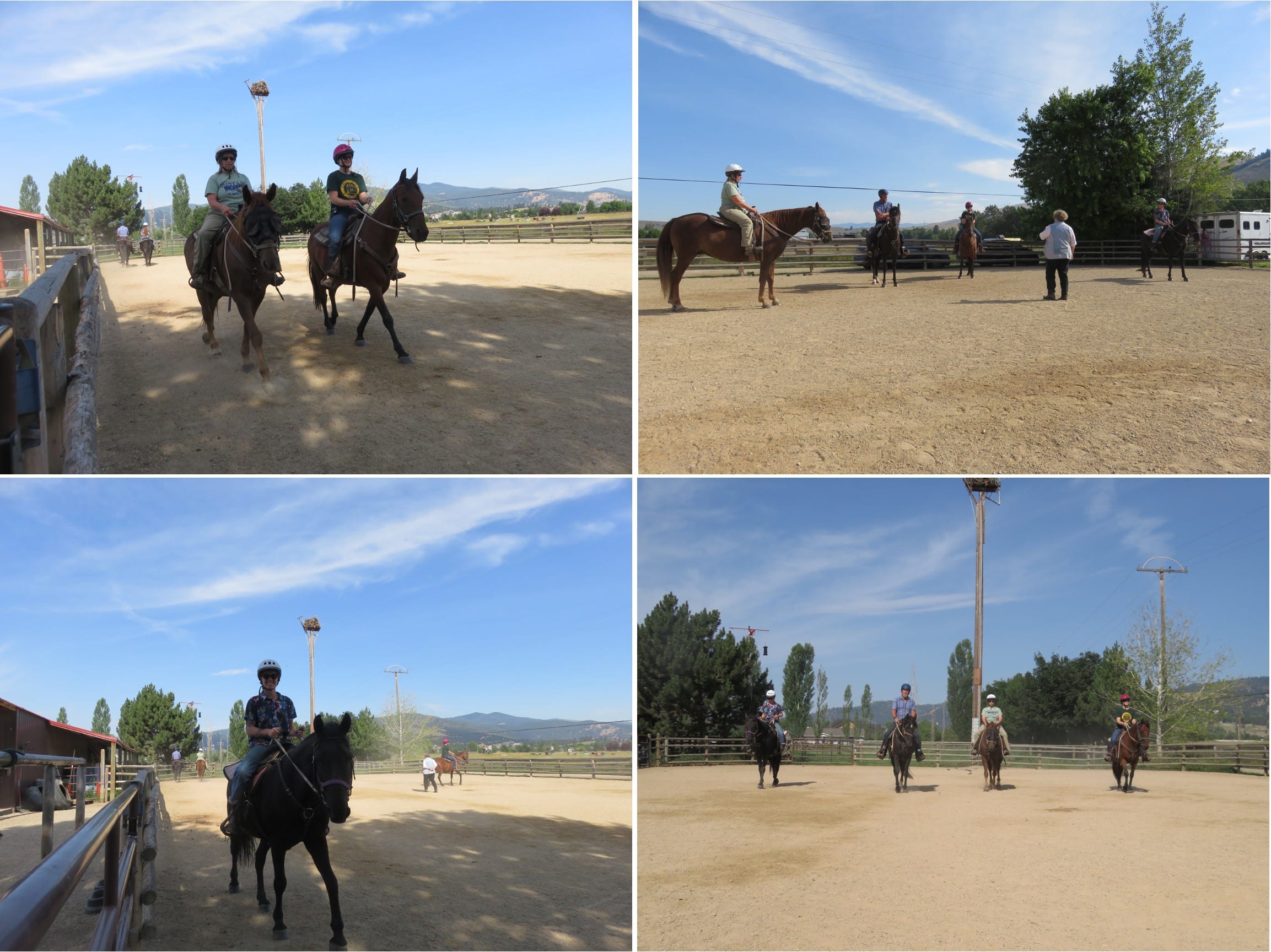 One of my favorite quotes about horses comes from Pam Brown: "Horses lend us the wings we lack.”

As a novice rider incorporating more and more into our arena lessons, I am seeing the importance of being matched with a steady, experienced horse like Dugan. He is the right horse, and his confidence boosts mine as well. He also makes it abundantly transparent for me to see what I have to work on, and this all circles back to the aspect of control even before mounting my horse.

SuzAnne had us start Tuesday’s lesson with five tasks to be completed as a game plan for starting in the arena. I much appreciate going into the corral with structure and purpose. After our initial tasks were completed, we set up into formations. This is where it got a bit dodgy for me and hard to manage. Drill teams can improve your skill as a rider because the patterns and commands require you to be at the right place at the right time, and to achieve this, you must guide your horse precisely and with control. It is the ultimate lesson in multitasking: you rate the horse's speed, make exact turns, and attempt to ride in exact pattern formations, all while being aware of what’s going on around you. It’s good for the horse, because they learn to listen and obey your request, and it’s good for me, because I learn to maintain this balance of control.

As I start to lose sight of the task at hand or become fixated on a command that I forget in that moment, I notice my lack of control and how a situation becomes messy or unclear. I find that everything in this sense is connected and how salient it is as rider to be confident and assertive, even when things are not going according to plan. To be proactive and not reactive of the circumstances that arises is the real balancing act.

We have come some ways since May.  We catch our horses, then halter, evaluate for fitness, groom, tack up, and mount up, all without assistance.  We reverse these steps when done riding for the day.  In between, we devise or follow a plan for the arena and take responsibility for our horses’ behavior as we do our best to ride in unison.  And more than any of this, the bonds with our horses grow.

With every ride, Mystery and I have a better idea what we can expect from one another. We are learning each other’s code and spirit. We are not there yet, but I can see from here the prospect that SuzAnne put in front of us from the beginning: horse and rider operating as a single unit.  It is a fascinating and tantalizing prospect, with reins almost superfluous and communication visceral and instantaneous.

Mystery has remembered his ground manners at the mounting block.  He may still sidle and prance a little before we move out.  This could be considered bad behavior, but I don’t care, as long as it is from excitement and not anxiety.  I have heard of cowboys who like a horse with “a little buck in the morning”.  Mystery has no buck, rear, or bite in him, but I have come to feel at home mounting a wound spring just barely waiting for direction.  He is quick, powerful, and precise.  He is, as SuzAnne would say, “a going horse”.

With every mile another revelation, there is a lot more for Mystery to tell me. As his confidence in me grows, so does his responsiveness. “Affirmative leadership,”  SuzAnne calls it.  Never aggressive leadership, never a failure of leadership.  In return, in the age-old bargain, I can never let anything happen to him.  It is a glad and frightening responsibility.

Horsing Around this week had a pre-session with Kate Dunn. Kate will partner with Jasper and will work independently with SuzAnne until she is ready to join the rest during drill team: