A sandhill crane strutted into our bench cam view this week, checking out the scattered seeds underneath the bench bird feeders.  And that reminded Julie Cowan of an up-close and personal sandhill crane story...

an explosion of underbrush and feathers 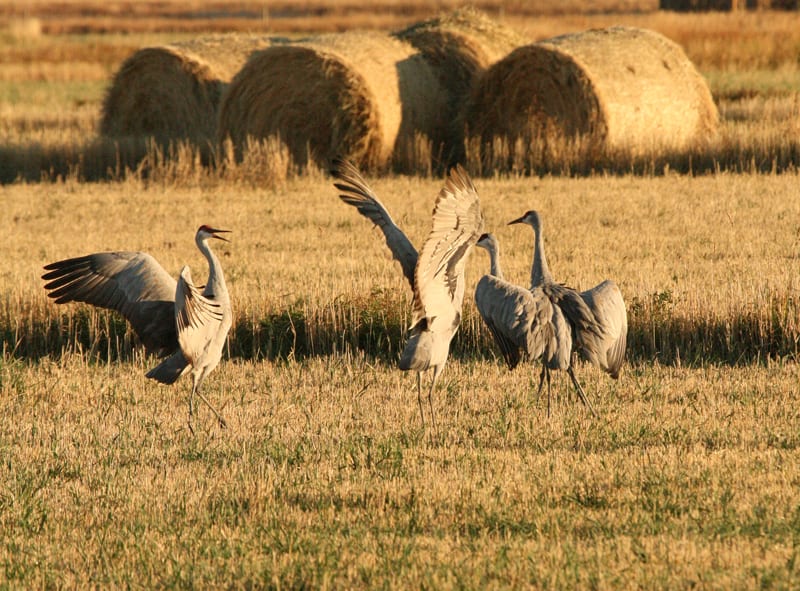 I never knew of them much before moving west to Wyoming the year after college graduation. They weren’t prevalent in my home state of Ohio, though it seems they have made a bit of a comeback after I moved away.

But I got schooled pretty quickly once while fishing in Montana nearly 20 years ago.

“Talk about an angry bird,” I laughed while recalling that story with my husband the other night over dinner. He replied, “Don’t forget BIG angry bird!”

I didn’t know what a sandhill crane was until I rustled one up out of its lair while navigating fishing holes along the west fork of the Madison River. I was keeping my eyes out for “big” critters, like bears, deer, moose or elk. But let me tell you, there’s nothing that will get your attention quite like the explosion of underbrush and feathers about five feet in front of you when you surprise a sandhill crane. And that alarm screech. Wowza.

It was late June or early July, and I no doubt had invaded a sacred nest—it was the right time of year for that. Needless to say, I didn’t stick around to find out. My adrenaline had me backpedaling faster than I was breathing—which was pretty darn fast—and all within a split second. The body is an amazing thing, isn’t it? And so are these tall, stately birds.

This, of course, was before we carried phones with A/V capabilities always at the ready, so I didn’t capture the moment. Let’s face it, even if that would have happened today, I wouldn’t have captured the moment, or even the moment after. I wasn’t about to stick around to experience the ire of a nesting crane as it came toward me with angry eyes and a beak to match! Some people say that’s smart. I say it’s pure self-preservation.  Here’s a sound as close to what I experienced that I found from this Youtube video.

Now imagine that sound amplified just a “titch.” At a distance of five feet, a 3-foot-tall angry (Oh, did I say angry? I meant BIG angry) sandhill crane with a wingspan as wide as I am tall (5-foot-4) is pretty intimidating. And while much bigger than our beloved ospreys (whose talons and beaks I would not want to come into contact with, either) these cranes weigh in at about 10 pounds for females and 14 pounds for males, and that long, pointed beak could reach out and touch someone in a hurry. Or is that “hurty”? 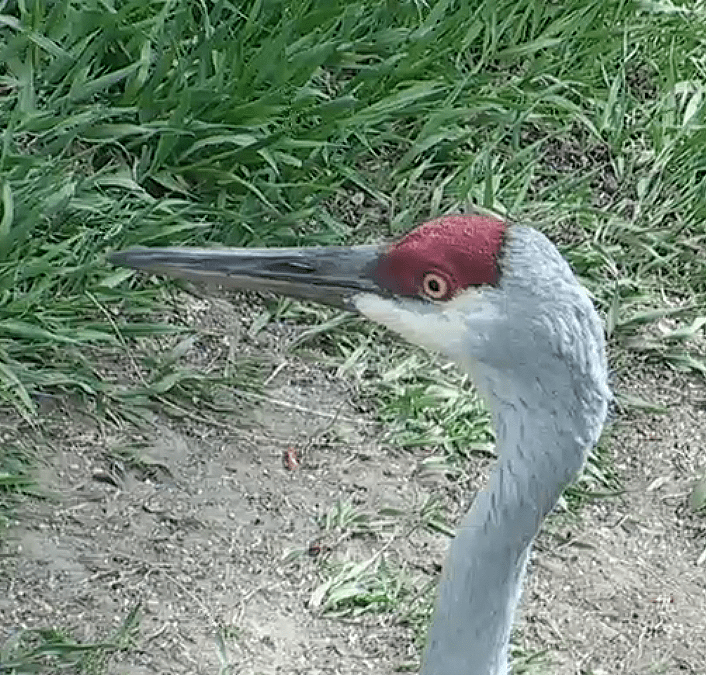 The red patch on their head, while strikingly beautiful, makes them look even meaner— at least it did to me back then as the head appeared full-frame in my view—though at a safe digital distance now, it looks pretty awesome.

Sandhill cranes perfer wetlands; hence, they nest in marshes and other moist habitats with standing water, though some nest on dry ground. Their ground nests can make them vulnerable to predators such as coyotes, foxes, ravens, raccoons, golden eagles, bobcats, American mink, and great-horned owls.

They do a fabulous little prance with heads bowed after mating—it looks so choreographed. It’s quite artistic. Goes with their stately character, I guess.

I captured some photos of these cranes in Ennis, Montana, some years back during a September photo junket to Yellowstone National Park. In these and the top photo in this post, they were hanging out with migrating geese in a rancher’s hay field, probably a stopover on their migration south.

Sandhill Cranes in a hay field in Ennis Montana[/caption]

Like ospreys, sandhill cranes generally lay clutches of one to three eggs and have about the same incubation period of around 30 days, give or take. Chicks hatch in June, weigh about 5 ounces at birth and within a month grow to about 3 pounds. But here’s where Osprey chicks and Sandhill chicks are different. Sandhill crane chicks are active and mobile from the get-go. They are precocial, meaning they are able to move freely after hatching and are actually able to leave the nest within a day! I imagine that is nature’s way of helping them survive ground predators. Obviously if osprey chicks were that mobile from the start, a lot more of them would fall out of their tall nests. Sandhill cranes attempt to fly at about two months old, fledge in late August and migrate south for the winter.

You can learn all about sandhill cranes from our friends at the Audubon Society.

Can’t get out into the marshes, you say? Well, we have a great way for you to experience the elegant sandhill crane right from your chair. This last week, we got a thrill when a sandhill crane showed up and stayed for well over an hour in the area we call “the bench” at Dunrovin Ranch, a transitional strip of ground between the ranch buildings, gardens and corrals that acts as a step-down to the riparian area along the Bitterroot River. Our bird feeders there attract all kinds of avian friends. The feeders also attract critters like deer, raccoons, and turkeys who clean up the spoils dropped from above. 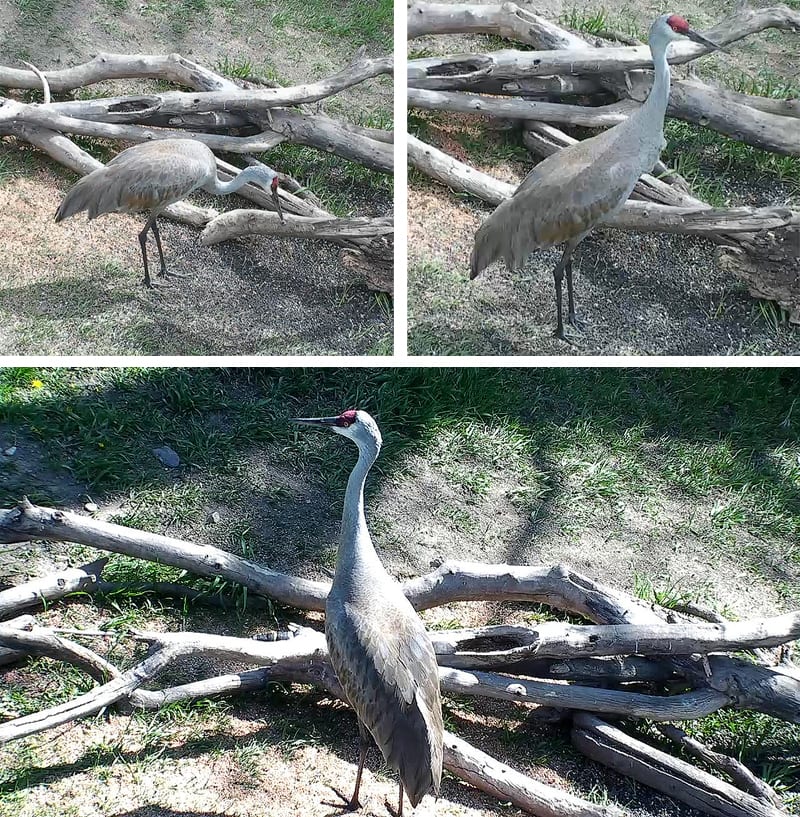 Thanks to one of our volunteer camera operators, Melissa (Ilovegrandkids on the chat—give her a shout of thanks!), we are able to share the great still shots above and this video footage or our newest visitor to the bench. Check out the closeups of their beautiful feathers on this video!

Dunrovin Ranch owner SuzAnne Miller has a theory about this new bird tourist. “Earlier this year we saw three sandhill cranes together. We know that we have a nesting pair downriver in the marsh. I bet our visitor is their colt from last year and had been happy to find an easy meal.”

Like most birds, sandhill cranes migrate south for the winter and like our ospreys, they tend to come back to the same nesting grounds year after year. Juveniles separate from their parents the following spring when the adults lay new eggs, and that could be why we have seen this singular bird recently—it very well may be the bird from the nesting pair downriver.

I have to admit that I chuckled out loud at the word colt used for the sandhill crane sub-adults. Yeah, I thought—a colt. That’s about the size of that crane I ran into on the Madison all those years ago. After the feathers had settled, and I was a safe distance away, my husband’s guffaws had transitioned to alternating fits of laughter with coughs and gasps. I believe I said something to the effect of “Dang, that thing was the size of a horse!”