Turkeys are plentiful in areas around Dunrovin Ranch but are not always present. It's been a few months since we've seen them. A recent video capture prompted a little history lesson by Julie. NEWS: Turkeys return to the bench

Turkeys return to the bench

Did Benjamin Franklin really suggest the turkey be our national bird?

After the Declaration of Independence was signed on July 4, 1776, the nation's new Continental Congress tasked Franklin, John Adams, and Thomas Jefferson—three of America’s founding fathers—with designing a national seal. But their efforts did not appeal to Congress, nor did attempts by two committees after that. It was six years later that Congress finally adopted a national seal—featuring the bald eagle, long considered a sign of strength back to ancient Roman times.

So where did the popular myth originate that Franklin suggested the turkey be our national bird?

According to an article by the Smithsonian Magazine, Franklin, in a letter to his daughter two years after the national seal was adopted by Congress in 1782, compared the virtues of the turkey and the bald eagle after seeing an artist's rendition of the seal with a bird that he thought looked more like a turkey. In his letter to his daughter, quoted by the Smithsonian Magazine, he said some rather unflattering things about our national bird:

For my own part I wish the Bald Eagle had not been chosen the Representative of our Country. He is a Bird of bad moral Character. He does not get his Living honestly. You may have seen him perched on some dead Tree near the River, where, too lazy to fish for himself, he watches the Labour of the Fishing Hawk; and when that diligent Bird has at length taken a Fish, and is bearing it to his Nest for the Support of his Mate and young Ones, the Bald Eagle pursues him and takes it from him.

With all this injustice, he is never in good case but like those among men who live by sharping & robbing he is generally poor and often very lousy. Besides he is a rank coward: The little King Bird not bigger than a Sparrow attacks him boldly and drives him out of the district. He is therefore by no means a proper emblem…

Yes, Ben Franklin apparently liked the turkey over the bald eagle as a better symbol. No, he didn’t suggest it when Congress was voting on it (though I wasn't there and couldn't prove this to be fact). But he sort of did suggest it was the better choice of the two in a personal letter to his daughter cited by the Smithsonian—one that was probably never expected to see the light of day beyond her eyes. So yes, no and sort of. That should clear it up perfectly.

And why and how the turkey got its name is a whole other can of worms. No, it’s not from the country of Turkey, which has no native turkey birds. Seems many countries and lots of merchant traders got involved in this one. See if you can follow the trail in this article from The Atlantic.

Nevertheless, the turkey, with its dark plumage and its rather unusual and brightly colored head flesh markings, is an all-American bird, native to North America, and it exists in every U.S. state except Alaska. And, like many wild game animals, their numbers plummeted in the late 19th and early 20th centuries due to uncontrolled hunting and loss of habitat as settlers moved westward and America expanded its towns and cities.  Conservation efforts have since restored the bird to its native ranges and expanded it well beyond—as is the case here in Montana, where turkeys were introduced in the mid-1950s to the Judith Mountains north and east of Lewistown.

After just a few successful introductions, Montana state game officials began trapping our now home-grown turkeys and transplanting them to other areas of the state. Montana is home to the largest turkey population in the Intermountain West with numbers around 120,000 in the Big Sky state. Not bad for a state that started with less than 20 Merriam’s turkeys about 65 years ago. 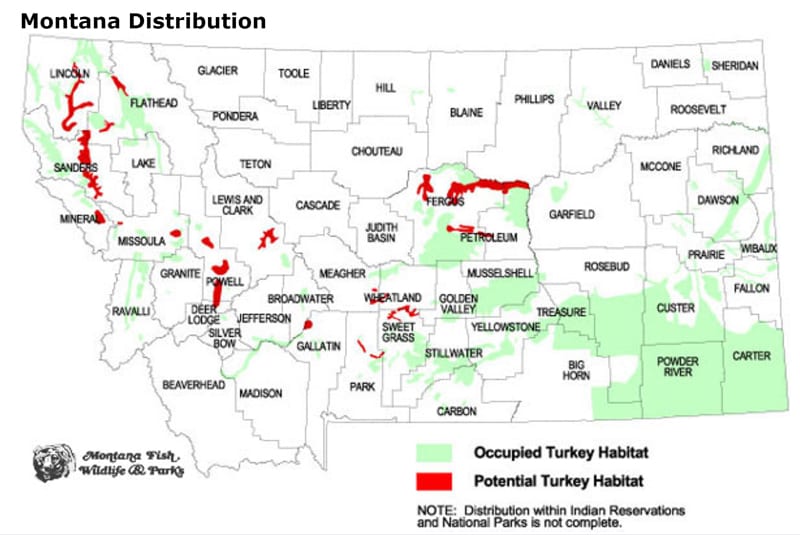 These big birds have become plentiful in Missoula County in recent years. Many times they can be seen along the two-lane highway that connects the city of Missoula to the smaller, rural communities of the Bitterroot Valley, including Lolo and Dunrovin Ranch, nibbling seeds and insects in the railroad right-of-ways, golf courses, ranches and people's yards.

Turkeys have been seen many times along the bench at Dunrovin, but because spring and early summer are nesting times, the birds have likely been staying close to their nests hidden in tall grasses and brush. We caught two of them on our webcam in July eating seeds under the bench bird feeders. 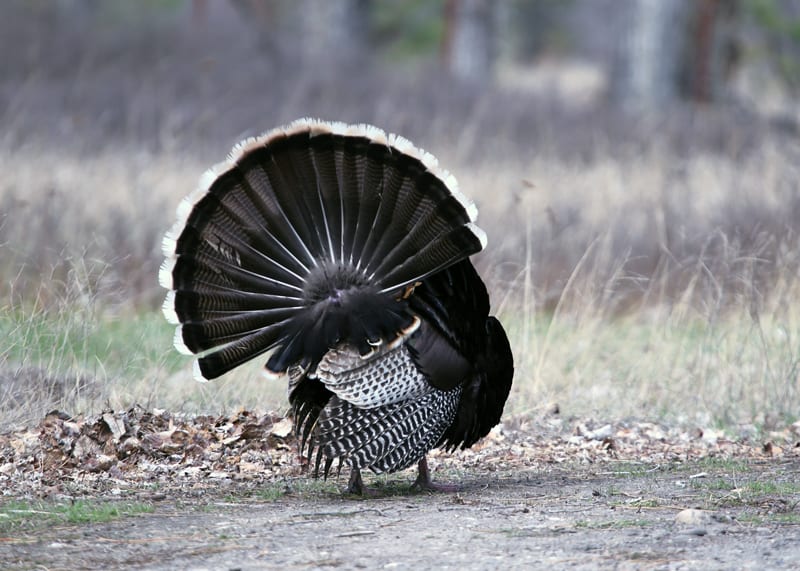 Learn more about turkeys, their history and habitat here: All About Turkeys