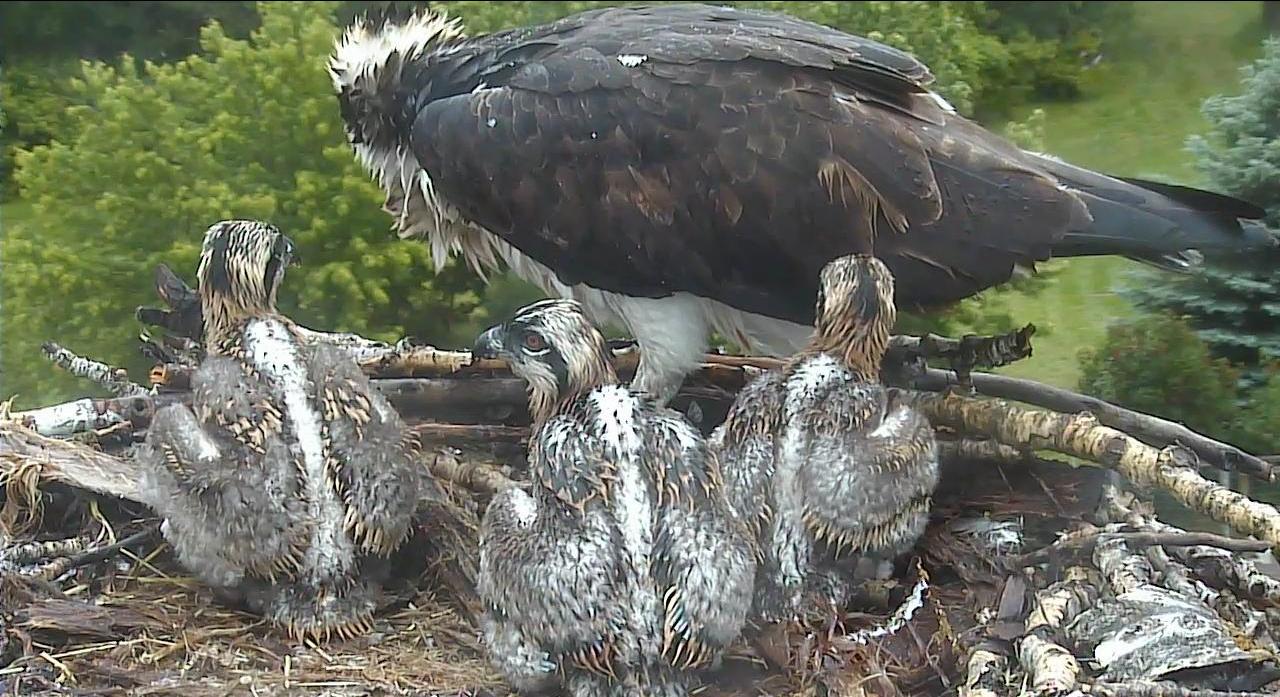 The earth in its orbit blocks the sun
Casting an ochre Shadow on the yellow moon
As the mother osprey labors to lay her egg
The father osprey hovers above looking for fish to catch
Casting a fluttering Shadow on the river below
As the trout darts past in murky waters avoiding its talons
The mother osprey crouches and spreads her wings
Casting a sheltering Shadow against the rain
As her three chicks huddle for warmth and food that does not come
The earth turns away from the sun as the cold night descends
Casting a killing Shadow on the chick so named below
As it relaxes and softly gives itself back to life's eternal circle
The chick is buried beside a tree near the ospreys' nest
Casting a reminding Shadow that honors its short life and large spirit
As the wheel of life turns yet again, the chick becomes one with the tree

For much of my life, I have staunchly resisted showing sentimental attachments to wild animals. I am a bioiometrician - a scientist who applies mathematical principles to biological problems. Science rightly demands detachment in the name of objectivity. Scientific evidence must be gathered and analyzed with a clear, unbiased eye. We must hold ourselves apart to prevent subjectivity from creeping into our observations and judgments. Cold, hard facts are the coin of the scientific realm.

What I have only recently begun to understand is that washing sentimentality out of science should not mean washing it out of scientists. In fact, I now believe that one of science's greatest failings has been to insist that its practitioners remain aloof from their emotions. Our focus on cold, hard facts have made us seem like cold, hard people and has prevented us from connecting well with non-scientists. Our aloofness is easily misinterpreted as arrogance. Holding our emotions in check can be seen as elitism and judgmental, alienating the very people with whom we want to share our findings. Science without sentimentality can lead to indecision and polarization, pushing people into various and equally distrusting camps. This division is all too apparent on important environmental problems - like climate change.

We are only a part of this world that we share with so many fellow living beings - yet we are a dominant part. Our actions greatly impact the health of our entire planet. Science is vital to our understanding of how we can inhabit this world in ways that sustain us and all other living beings. But science does not tell us why we should do what we must do; science does not give us the will do to what we must do. Science often reveals the HOW and the WHAT we must do, but the WHY and the WILL come from the heart. They come from our spirit - our connections with our fellow living beings. Our sentimental attachments are absolutely as important and as necessary as our scientific knowledge.

This is not to say that sentimentality should dominate our perspective either. Unfettered emotion in the absence of thought can be not only ineffective, but dangerous. Overemphasis on the individual animal can blind us to larger, more complex factors affecting us all. It can lead to a senseless use of resources - money, time, energy, political will - to rescue an individual animal (see Streaming Eagles in the New York Times) rather than addressing real issues of greater importance. It can be used and manipulated by others with ulterior motives. It can paralyze us politically and prevent us from using those cold, hard scientific  facts to help guide our actions. Emotion without thoughtful direction is at best wasted energy, and at worst the root of many of  humankind's most destructive actions.

Clearly, we need both science and sentimentality to survive. Heart and head must be equal partners in our journey. The results of the recent survey I conducted of  viewers of the Montana Osprey nest cameras heartened me and brought me to very different conclusions than those expressed by Jon Mooallen in his Streaming Eagles article. Our web camera viewers demonstrated that they do, indeed, filter the events unfolding before them at the osprey nest through both their hearts and their minds. They reported both a personal attachment to the individual birds and a greater understanding and commitment to all birds and nature in general as a result of their viewing.

It in is this spirit that I feel the need to acknowledge the passing of Ozzie and Harriet's third chick, Shadow. Shadow lived its brief life in the shadow of its older siblings. Had the killing storm not come, it likely would have survived to continue life's struggle. The ospreys' survival strategy of ensuring that the biggest and the strongest chicks first get whatever food arrives makes perfect sense for the survival of the species - but that does not negate that fact that Shadow was on the losing end, that it must have felt pain in its death, and that people felt pain in watching it die. Its short life had meaning; it will be remembered; it reminded us all of how very precarious and short our own journeys on this planet are. And it reminds us of how dependent the ospreys are on abundance of fish from clear water. It demonstrated our interdependence on a clean healthy environment and our vulnerability when things go wrong. Who knows where or how the ripple impact of this one little chick will end in our hearts and minds.