My life’s path in working with natural resource agencies has taken me into the villages and homes of many indigenous peoples across the Americas, both north and south. These encounters fed into a childhood interest that sprang from a variety of different sources.

For whatever reason, my grandmother had framed and hung portraits of a number of famous American Indians in the original Dunrovin cabin along Carpenter Creek in the Belt Mountains of Montana. I can, to this day, see them hanging on the log walls. Prominent among them was Chief Joseph. The story of Chief Joseph, leader of the Nez Perce Tribe, and his nearly successful attempt in 1877 to lead his people to the Canadian border to escape imprisonment by the US federal government on an ever-smaller portion of the lands they once called home, captured my heart and my imagination. My love of the out of doors expressed itself with dreams—both daydreams and the subconscious fantasies that visit us during the night— of living among the Indians, moving across the landscapes, finding one’s spirit in the animals, the mountains, and the sky.

This childhood fascination left me seeking opportunities to engage with indigenous peoples and fueled a thirst for knowing more. It also planted in me a sense of shame, and the more I learned, the greater my shame at what my ancestors had done. I could not escape the fact that Montana’s wave of white settlers that included my great-grandparents, aunts, and uncles, engulfed the Indians and caused untold hardships and atrocities. While my family was busy building ranches, raising cattle, and digging the mines, Indian families were running and fighting for their very survival. My mind was, and is, unable to fathom the terror and injustice that America’s Indian populations endured in this period, as the US’s 19th-century Manifest Destiny rolled across the landscape.

I did not know how to hold and carry that shame. I still don’t. It is a barrier. I understand that my white privilege has blinded me to the many ways in which our culture has long suppressed, attacked, and demeaned American Indians. While the overt violence has stopped, the prejudices live on to widen the gulf between us. Rarely do we work side by side or have the opportunities for truly shared experiences that might bring us together.

By working at Dunrovin Ranch and extending her hand of friendship, Kyla Rose Two Bulls opened a small bridge across that deep gulf of misunderstanding and inability to communicate. She allowed me in. She talked with me. She honored me by inviting me to her home in Lame Deer, introducing me to parents, and encouraging me to participate in their traditional sweat lodge. She taught all of us a great deal. Her quiet demeanor, her obvious intelligence, her strength and personal pride in her heritage, pulled us in to an honest version of her world with all its challenges, accomplishments, struggles, and joys.

I drove her home to Lame Deer, Montana, so she could bring her mare, Sioux Girl, back to Dunrovin. The 450-mile trip gave us an opportunity to get to know one another away from the ranch and our work responsibilities. Arriving the weekend before Thanksgiving, it was nearly dark when we pulled up and parked in her family’s driveway. They warmly greeted me, said that they were in the process of readying their sweat lodge, and graciously assured me that I was welcome to join them in this intimate and very moving ceremony. 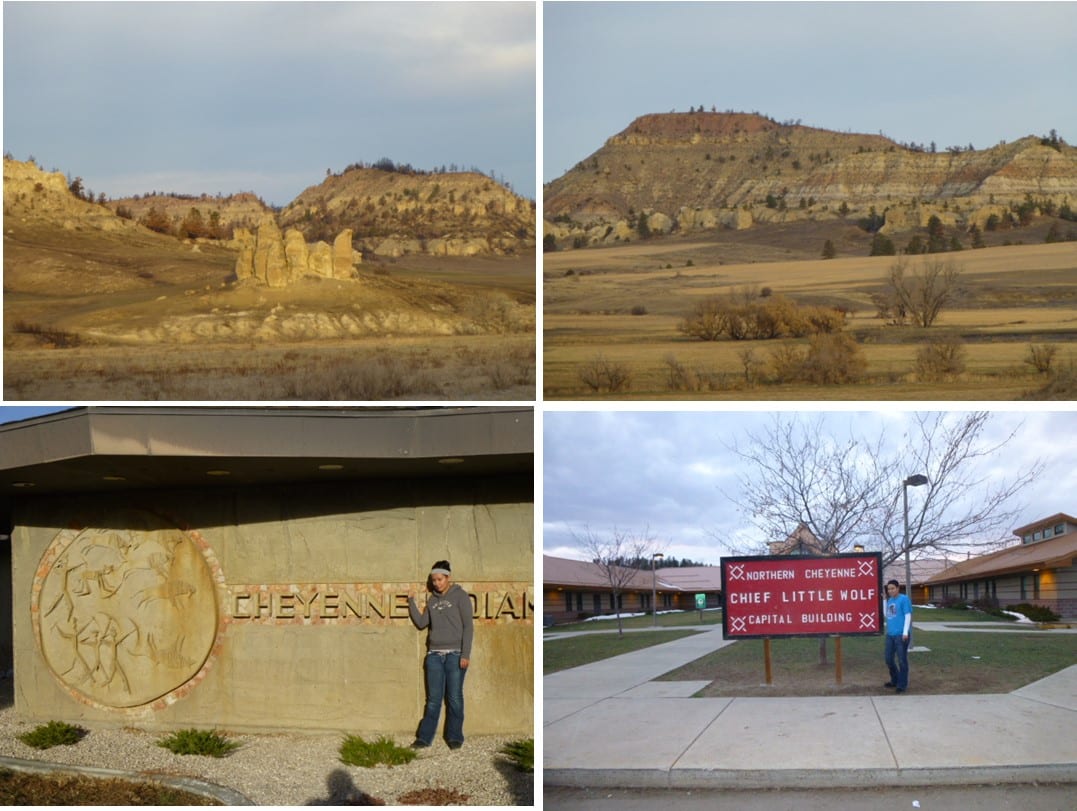 I had, of course, heard of sweat-lodge gatherings, but never dreamed that I would have the privilege of attending one with people intent on including me. The ceremony centered around community cohesion, individual responsibility, affirmation, and working through each person’s struggles. Sitting in the complete darkness, sweating from the steam rising off of the water thrown over stones that have been brought in from a fire that had been burning for several hours, and hearing the voices of some in their native language, their stories, their greetings to one another and to me, and feeling the energy as they described ongoing battles with their inner demons, stopped time for me, took me to an inner sea of calmness that was mystical and cleansing.

The next day, I asked to see Kyla’s school in the town of Ashland. While no one at any time complained or grumbled about the circumstances of their lives, this little day trip opened my eyes and ears to what their lives, living on the Northern Cheyenne Indian Reservation, might have been like. Kyla’s mother faced several vastly different choices when deciding on her children’s education. There was the public school in a small, nearly all-white town to the north where her children would be bullied and shunted aside. Then there was the local Bureau of Indian Affairs school where they had endless trouble getting and retaining qualified teachers. Or she could homeschool them. The choice she made was to send them to a private religious school about 20 miles to the east, where the education was solid but where the atmosphere breathed of how the whites had saved the savage Indians. Early mission photos on the walls proclaimed it loudly. The Northern Cheyenne museum was run by the religious order rather than the tribe. The messages were inescapable. 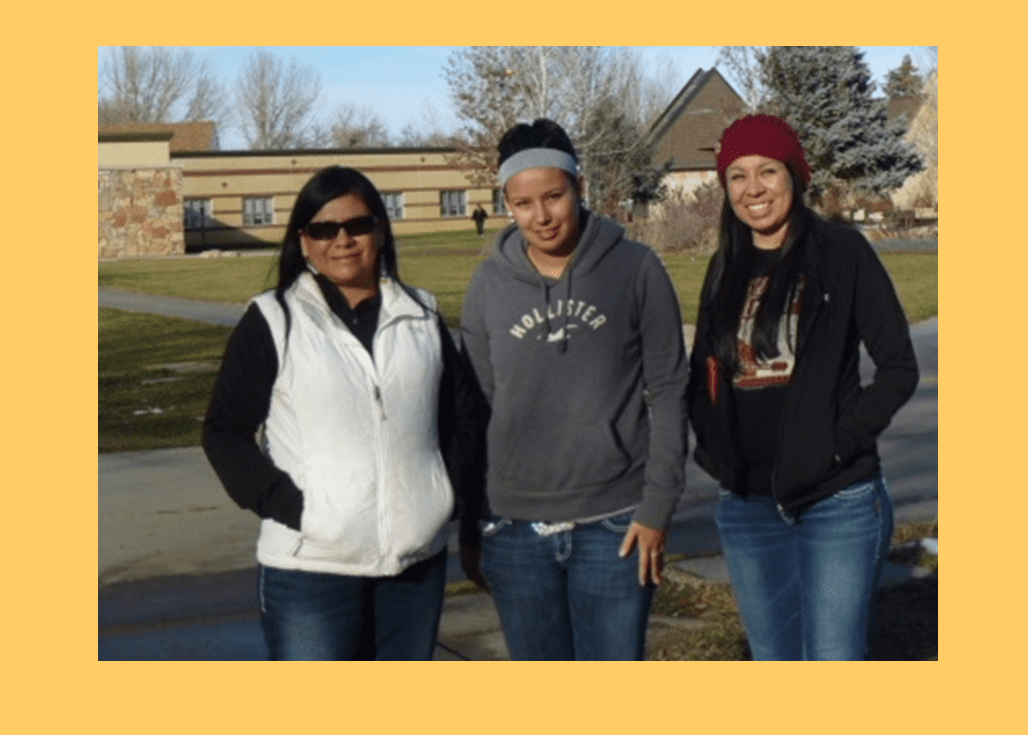 What a choice. She made the right one. Both of her daughters got good educations, graduated, and attended the university. She and her strong family counterbalanced the prevailing “whites are right” attitude prevalent throughout the school complex. The teachers were both caring and demanding. They clearly embraced Lynette and her children, yet they were also living remnants of a mission-driven system that saw the Indians as less.

During my stay, I watched the ebb and flow of neighbors coming and going to and from the house to borrow something, drop off a child, share some food, give a helping hand, or share a meal. One day while Kyla and her family organized Thanksgiving baskets for community members, I stayed for several hours alone in the house with several small children. They watched  TV while I read from their coffee table books—books I had never seen before on topics about which I know little or nothing: the history of the Two Bulls family and an account of the Fort Robinson massacre, an event that Kyla’s stepfather, Phillip Whiteman, decided to commemorate by organizing a ceremonial Fort Robinson Outbreak Spiritual Run by Northern Cheyenne youth from Nebraska to Montana every January. During the first years of the run, they weren’t allowed to run down the main street of Broadus, Montana. Discrimination truly persists.

Kyla and her then boyfriend and now husband, Jordan Longtime Sleeping, were, simply put, two of the most natural horse people I had ever seen. They seemed to speak an equine language, knowing what a horse needed and quietly, confidently providing it. Their own inner calm was transmitted to the animals. Their bodies seemed to mold to that of their horses, riding bareback like the wind. Their soft touches would melt the donkey Divas and their gentle pulls on their tails would straighten their backs. They were humble about their skills and always looked to the horse and the rider to provide assurance and guidance.

During one of our kids’ camps, Kyla taught the campers some Indian dances and got them involved in painting our horses in the Lakota tradition. This opened an entirely new world to us as we began to embrace the concept of painting the horses to reflect their roles in our world and to honor them as our partners. This practice has grown over the years and is reaching new heights as we organize our Horse of a Different Color event to raise funds for equine-assisted therapy programs. 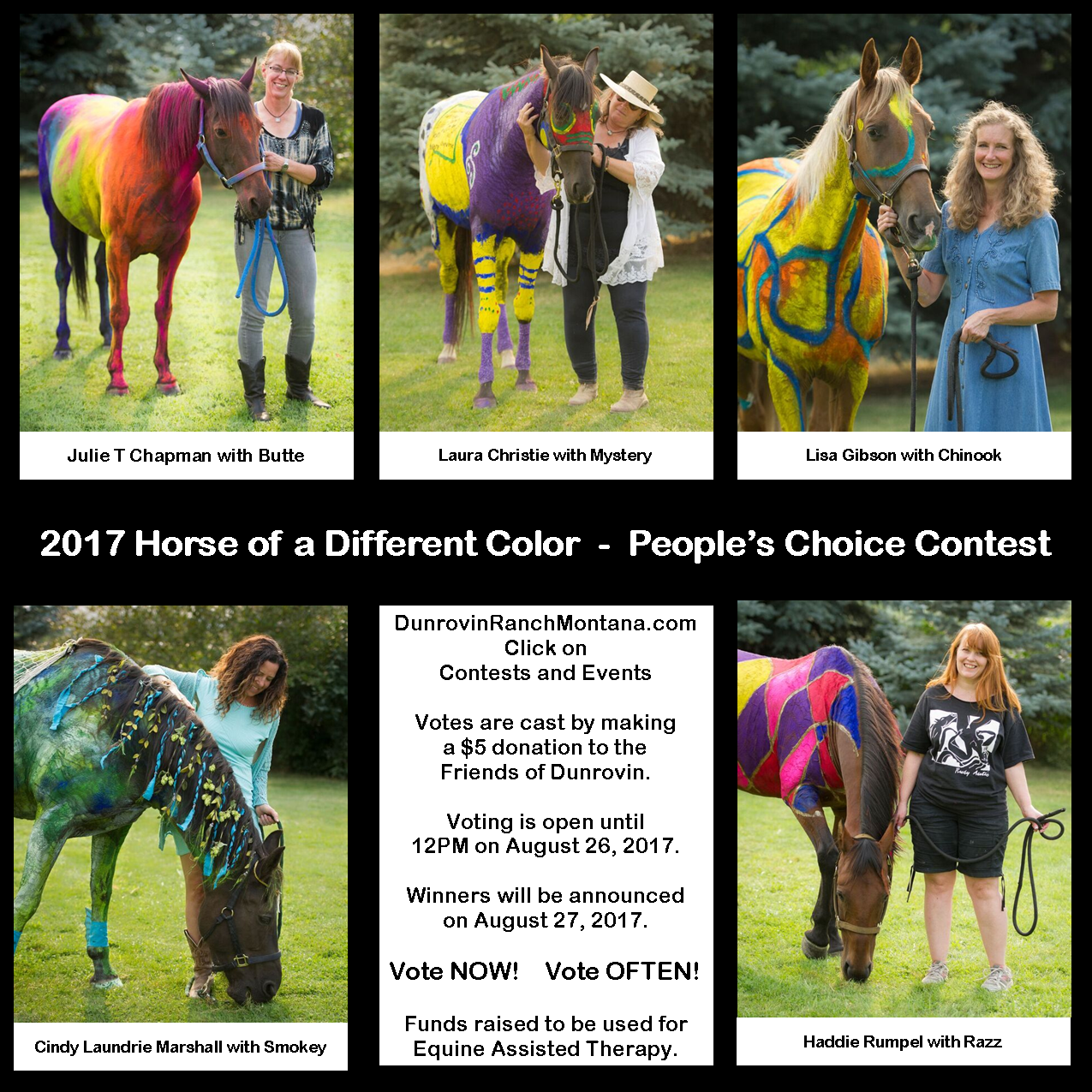 Klya also connected us with the University of Montana's Kyiyo Native American Student Association and developed a partnership with them to host a two day children's camp at Dunrovin with an emphasis on learning Native American traditions. The camp was very successful and resulted in raising funds for the Kyiyo's Pow-Wow that was held the following spring. What a colorful and joyous event for all.

We knew that Kyla would move on. She was only in the Missoula area to attend the university. She and Jordan now have a beautiful son and live in New Town, North Dakota. Her impact remains. She left a legacy of color and warmth and greater understanding. She opened our eyes to continuing to search for ways of reaching across the gulf that divides our cultures.  We are grateful for the time she spent with us.

For a better understanding of the challenges of growing up in Indian country, please watch the beautiful film, Dakota 38.

For a very hopeful story of a Lakota that is making a big difference in his community, please read about Nick Tilson.