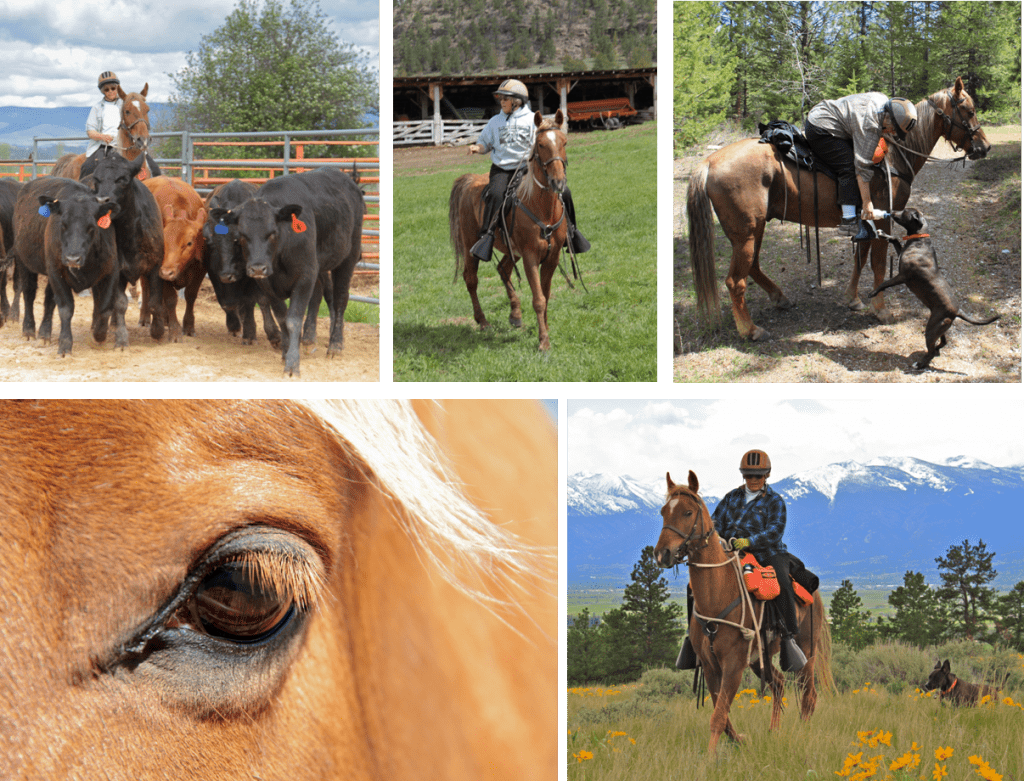 Chinook came to Dunrovin under difficult circumstances. Power, SuzAnne’s beloved partner for over 15 years, suddenly died and left SuzAnne with a broken heart and in need of a new guide horse to lead horseback trips into the backcountry. While most of the horses from the Dunrovin remuda could have fit the bill, SuzAnne didn’t want to take any one of them out of commission for guests, so she started the long process of finding a new horse. However, she had a problem:  while riding one of her horses in the arena, it fell on top of SuzAnne and badly injured her leg. This meant that not only was she without a lead horse, but she was also out of the saddle all together. She would have to enlist assistance from her many friends in Montana’s horse world to not only find the right horse, but to “test drive” it for her.

The word went out and soon a horse in Bozeman, Montana rose to the top of the list. With her good friend, Coe, along to do the riding, SuzAnne went to Bozeman to meet the horse. He impressed both SuzAnne and Coe, so she brought him home for a test period. His beautiful, fast gait and his sweet personality won SuzAnne’s heart in no time.

He had a great deal to learn to become a lead horse Dunrovin ranch. That first summer did not go smoothly as he was literally thrust into situations for which he was not totally prepared: he was young and vigorous, but he ran from cattle, he spooked at all manner of wildlife, he lacked the conditioning to negotiate the difficult terrain, and he really didn’t know how to control or balance his body when facing obstacles. But he gave it his all. After each fall or stumble, both he and SuzAnne got up and tried harder.

Once the summer season was over, SuzAnne had more time to dedicate to just him and his needs. They spend lots of quality time together learning to trust and enjoy each other’s company and building his physical strength and conditioning. He spent a couple of weeks at a cattle ranch getting accustomed to being around them. SuzAnne took time to just play with him so that every encounter between them was not focused on work or training. It worked! He is an excellent lead horse with a very warm personality and lots of go. SuzAnne began to occasionally allow other members of the Dunrovin staff to use him as a lead horse – and they quickly saw his many merits and now request him whenever they can.

His name had been Jazzy when SuzAnne bought him – a name that did not resonate with her. Mulling over possibilities, it was Sterling who suggested Chinook – a warm breeze during the winter of SuzAnne’s grief over Power. It has proven to be the perfect name. He did, indeed, breath new, fresh air into SuzAnne’s life after losing Power. Chinook has captured not only SuzAnne’s heart and admiration, but that of the Dunrovin staff as well. They love riding him on those few occasions when SuzAnne is willing to let him go.