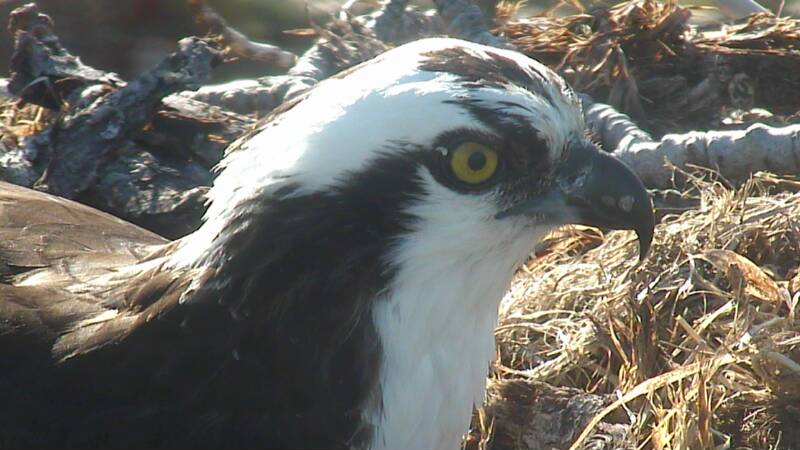 On August 22, 2014 one of the Dunrovin wranglers was guiding a trail ride across the Bitterroot River when she spotted a dead bird lying face down in a pool of water. Knowing that everyone was concerned about the male osprey from the Dunrovin nest, Ozzie, she retrieved the body and brought it back to Dunrovin. Ozzie had not been seen on the web camera since August 18. The summer of 2014 had been punctuated by repeated attacks on the ospreys’ nest by a couple of bald eagles who were also nesting in the area. The video below shows an eagle attack during that summer. We slowed the video down at the end and you can clearly see the white tail feathers of the attacking eagle.

A close inspection of the body of the dead osprey confirmed that it was Ozzie. It also revealed a large wound under his right wing, most probably caused by an eagle attacking him from beneath in a effort to steal the fish that Ozzie was carrying back to Harriet and his two chicks. Conflicts between eagles and ospreys are not uncommon, although they rarely result in the death of one of the birds. Here is a short video of an eagle and osprey encounter that occurred in August of 2016 on the Bitterroot River that runs through Dunrovin.

We were all heartsick, but we were also very grateful that we had recovered Ozzie’s body and knew his fate. Dunrovin contacted Montana Fish, Wildlife, and Parks, who took Ozzie’s body and made a taxidermy mount of it to display in their Montana Wild Educational Center in Helena. He now graces the wall of their center on a nest with a female mount by his side. The display shows the dangers of baling wire in ospreys’ nests, and encourages people to pick up twine of any kind to prevent the ospreys from taking it to their nests and endangering themselves and their chicks.

It is not possible to overstate the amount of sadness that Ozzie’s death caused all of us who have been watching the Dunrovin nest over the years. Ozzie was a real character. He had personality. He was most famous for his love of incubating his eggs. He would land on the nest, bend over Harriet, and pull on her wing to get her to stand up and move off the nest so he would take her place. She was not always cooperative and frequently resisted his efforts. When in both 2013 and 2014 Dunrovin sponsored a school project called Awesome Ospreys to get kids to watch the nest and determine the amount of time Ozzie incubated the eggs relative to Harriet, the results from both years indicated that Ozzie’s incubating efforts far exceeded the average for male birds. He clearly enjoyed incubating his eggs. 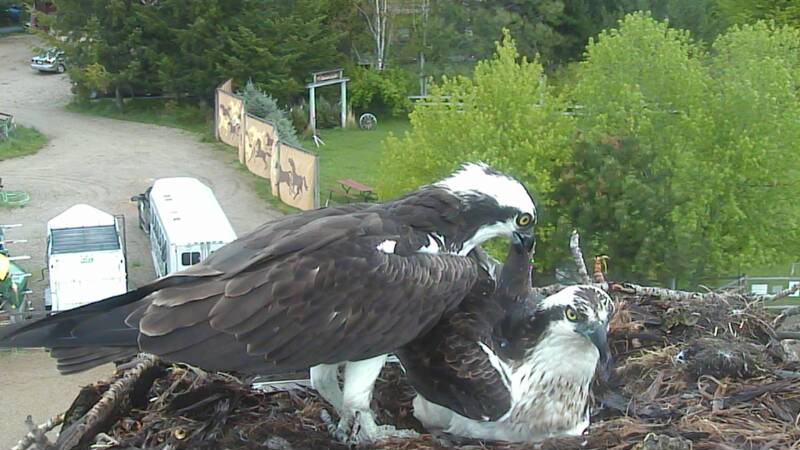 Ozzie was a superb hunter, a valiant defender of Harriet and the nest, and a most dedicated parent. It was always Ozzie who stayed and stayed and stayed with the last chick until it took wing to migrate away. One year, he did not depart until the latter half of September, remaining near the nest to feed his last chick. When Ozzie was killed, Harriet stepped right up to assume that role, becoming the sole provider for their remaining two chicks. Ozzie and Harriet have taught us so very much about the complexities of ospreys’ lives, about their total commitment to their own collective family survival, and their unquestioning determination to overcome whatever challenges each year presents. Through winter storms, summer heat, unrelenting rains, swollen rivers, and food scarcity, as well as constant harassment by other predators, these birds struggle on. It is any wonder we love them so much?

One of the most memorable events in my life happily occurred during the spring of Ozzie’s final year here at Dunrovin. I just happened to be out near the barn when Ozzie arrived back at Dunrovin to find Harriet already fluffing the nest. While I had read of the short, spectacular mating dances ospreys do upon encountering each other each spring, I had never before witnessed it. There was Ozzie flying high in the sky, chirping to Harriet’s return call, then dropping precipitously toward the nest, climbing again and performing the act several more times. I was spellbound. Below is a video that I found on the web site showing an osprey’s sky dance.

March cannot arrive at Dunrovin without me thinking of Ozzie, that beautiful greeting he shared with Harriet during his last spring here, and all the wonderful memories I have of his presence at Dunrovin. After his death, I wrote a poem that I would like to again share. 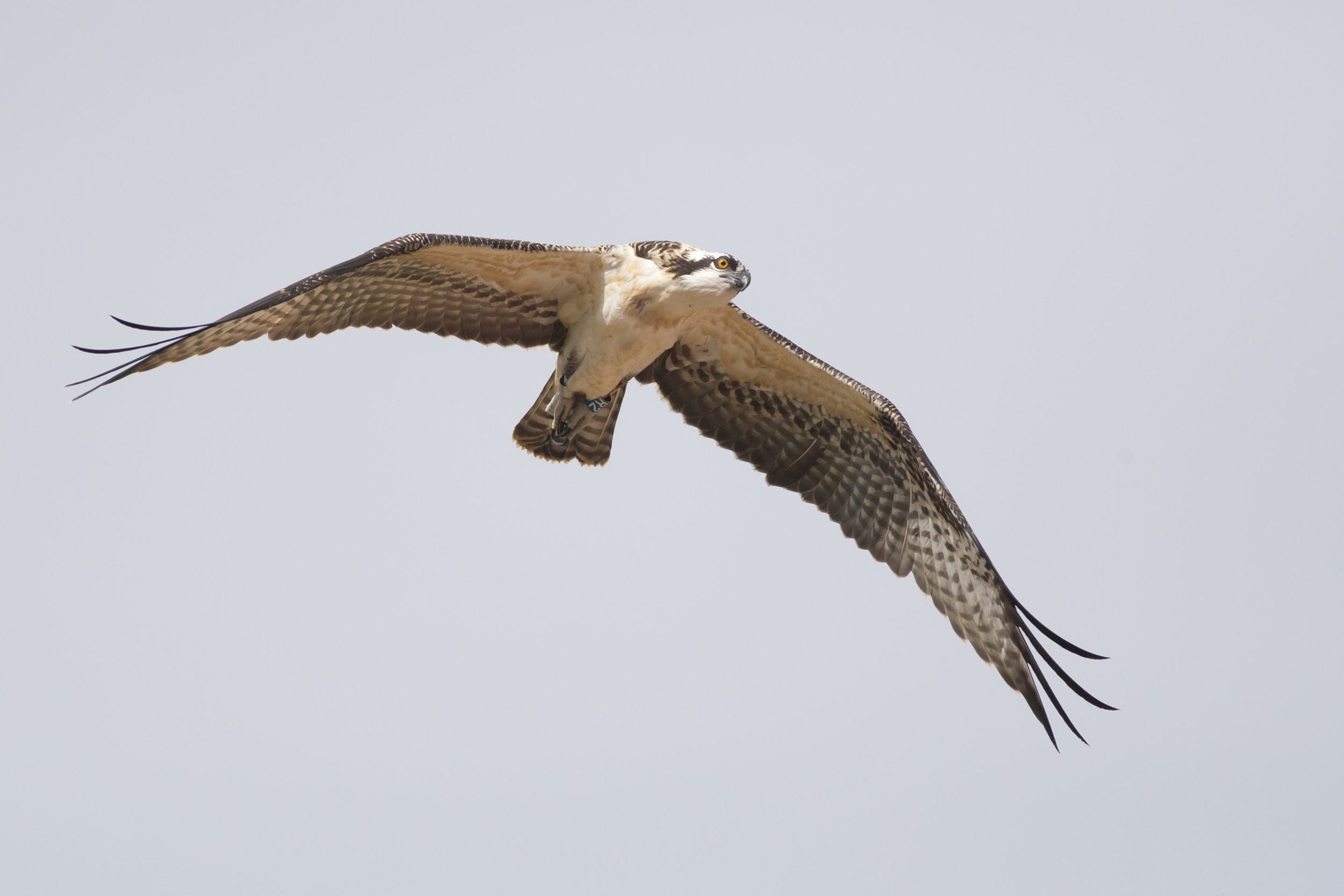 Who will ferry our summer to us now that Ozzie is gone?

Who will paint our summer with color now that Ozzie is gone?

Who will sing our summer serenades now that Ozzie is gone?

Who will tickle our summer fancy now that Ozzie is gone?

Enthralling our hearts with his beauty, his strength, his dedication to family

Who will nourish our summer wonders now that Ozzie is gone?

Who will fill our hearts with summer satisfaction now that Ozzie is gone?

Previous Post: « The Long and Winding Road
Next Post: [email protected] Book Club: The Names of the Stars »