Talking directly with author Mark Spragg about his lyrical, coming-of-age memoir, Where Rivers Change Direction, greatly deepened our appreciation and understanding of the book. Our book club literary hostess, Judy Blunt, was able to connect us with him for an hour-long conversation where he addressed questions that our readers had posed, and we had lots of them. 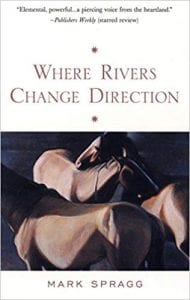 Mark’s book leaves one wanting more—more of the joy of reading his vivid, detailed descriptions of a way of life that few can grasp. Growing up on Wyoming’s longest and most remote guest dude ranch situated along the Great Divide on the high and harsh Yellowstone Plateau, Mark takes his readers along with him through a series of independent short stories, each beautifully written with exacting details that bring alive the smells, the light and shadows, the sounds and quietude, the fears and joys, and the spiritual essence of the country, the animals, and the people of his childhood. The stories delve into the important events, the endless work, and the complicated relationships with family, coworkers, guests, and the animals of Mark’s boyhood, and weave together his impatient and hurried journey to establish himself as a man “of use.”

The book closes with his personally draining and poignant account of caring for his mother during her prolonged death from emphysema. Appearing only tangentially in the first parts of his book, his mother’s prominence in the last chapter seems almost out of place, a shift in time and focus. Mark even switches from the past and present verb tenses in this last story, and we learn from talking with Mark that this was intentional, that he used the future tense to distance himself from the pain of watching her die. We also learn that the earlier stories of the book were written for her, to show her that he and his brother had thrived in spite of family tensions that she regretted. This was his last gift to her. He wanted to validate her decisions regarding her family and, by thinking of her during his writing, he was able to capture a degree of innocence and honesty that he feels he has never again achieved in his writing.