Living with our Jack Russell terrier, Kola, has been an exercise in patience, anger management, deceptive manipulation, restraint, and finding the humor in every situation. My son Jake really said it best: “Kola is the best worst thing we’ve ever had.”

Whoever thought a Jack Russell Terrier would make a great city apartment dog must have been high on drugs. I know that Kelsey Grammer made it look easy in his ‘90s TV series, Frasier. In episode after episode, little Eddie would steal the show with his antics and total understanding of human behavior. Oh, yes, they are undeniably cute, with those big eyes set in a nice compact body. They are incredibly smart and can read the body language of another animal with just a glance. They are the perfect size for apartment living, with sufficient spring in their little legs to easily jump onto any piece of furniture or countertop. What Frasier failed to convey, however, is that they are also the animal kingdom’s embodiment of attention deficit hyperactivity disorder. Possibly the most alert animals on earth, equipped with trigger-sensitive instincts to give chase, Jack Russells need to be continually active with lots of space and multiple diversions to blow off their endless energy and dampen their obsessions.

Kola was less of a deliberate purchase than my grasping for a solution for our barn mice population. I bought Kola for his killer instincts. I knew he was going to a high energy dog, but I just wasn’t prepared for exactly what that meant. We have hundreds of acres, tons of distracting smells and sounds and sights, and an endless number of barn mice and pasture gophers to give our little Kola ample opportunity to run, chase, and terrorize other living creatures. Yet, we are still held hostage by this 10-pound bundle of pure nuclear energy.

The only difficult thing about listing Kola’s many disadvantages as a guest-ranch dog is the time it takes to include so many items. He has designated himself as the “Chief Protector” of my office and erupts in growls and barks whenever anyone dares stop by, which, as the owner of a guest ranch, is very often. His loud, incessant barking can be heard on the web cameras as well as by anyone who happens to be talking with me on the phone when someone darkens my door.

Kola can terrorize everyone, from large grown adults to small children, if he takes it into his mind that they represent a threat of any kind to Dunrovin. Not only irritating, this just doesn’t represent us well to the world. We LOVE having people come to Dunrovin and we want everyone to feel safe and welcome. Kola’s first snarling impressions can send people scurrying for their cars to avoid his wrath, only to have a staff member intervene and try to explain the inexplicable nature of this feisty little dog. He is not mean. He most certainly does not intend to scare everyone. His way of talking is to growl first and then ask questions. He simply cannot control his urge to chase after anything at his eye level, which includes pant legs, shoelaces, bubbles floating down the river, and even the shadows of butterflies on the ground.

Oh, and did I also mention that he is quite possibly the most entitled creature I have ever encountered? Upon arrival at Dunrovin as a puppy, he established himself as THE ONE that all others would serve. He conned Miss Gertie into carrying him around in her saddlebag. He routinely picks up his derrière and plops it on top of Jewel to sit comfortably on her side. He never hesitates to take any kind of food left within his reach, making him a most untrustworthy camping partner. While he has not yet taken over the driver’s seat, he insists on riding shotgun, scanning his eyes for any dog or creature that might come within view. And should he see an empty lap, he hesitates not to climb in and assume, rather than request, complete adoration from said lap’s owner. In the evenings, when he finds me in my reclining chair enjoying the late-night news, he never even asks before jumping up and climbing not just in my lap, but also onto my chest, where he puts his face right up next to mine and gazes steadily at me until my hands find his body for some serious scratching and petting. What a hedonist! 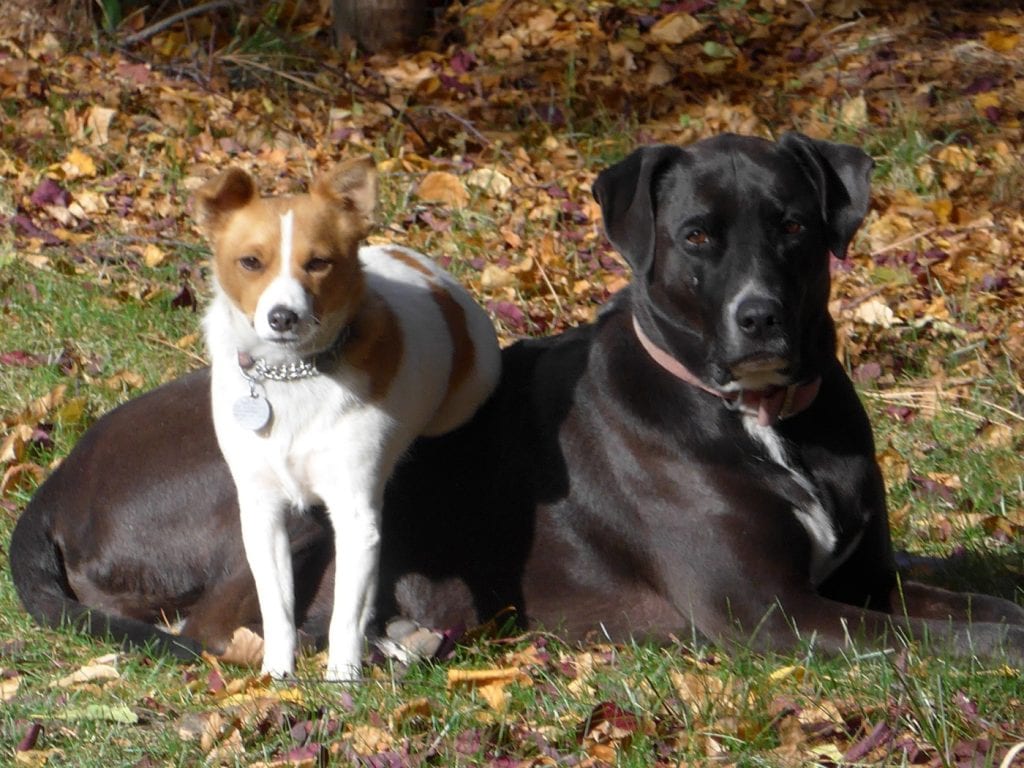 You are by now getting some indication of the WORST parts of Kola, so maybe I had better explain why he does, in fact, qualify as the BEST worst thing. The truth is that Kola has taken over the Miller household and pretty much rearranged things to suit him. He has trained us. And one aspect of his training has really stuck: he has trained us to love him.

Just when you think you can’t take one more barking episode, he turns on his charms, gives you that “oh, how I adore you” look, and you are simply had. He’s irresistible. He’s a never-ending source of mirth and laughter, as he literally tries to climb into the television screen to run with a cheetah featured on the National Geographic channel. At the river, he creates, then destroys, his own bubbles, spending hours along the shore chasing and biting at the bubbles he stirs up with his feet.

A very quick learner, he has mastered running with the horses. Ever since Kola’s first big trail ride, he understands horses’ movements and can anticipate where each horse’s feet will fall, carefully judging when to dart between their legs, when to get out of the way, and when to stop and look pathetic in order to can catch a ride across a deep river. He hates to swim, so when we encounter a creek and I do not stop to scoop him up onto the saddle, he disappears either upstream or downstream to look for a bridge or set of stepping stones. It may take him a good half hour to catch back up, but he always does. We can go all day at a fast pace, covering 20 miles or more, and he is right there, darting on and off the trail, chasing chipmunks up trees, and easily doubling our miles.  Those little legs of his are strong and can carry him far and fast.

The truth is that Kola is indeed a challenge, but one worth the effort. In loving him, he reminds us that we need to accept animals and people for who they are, not for whom we might want them to be. He teaches us that with a little patience and understanding, we can learn to dance joyfully with a being that is so vastly different from humankind. Tolerance, acceptance, and love require something of us but returns something of even greater value. He really is our best worst thing, and he reminds us that finding the best in everyone and everything helps us find the best in ourselves.