It was never my intent to breed Tennessee Walking Horses; but then Annie, my very first horse, became permanently lame during a freak hail storm that hurtled baseball-sized stones into her pasture. Did another horse kick her during their frantic run? Did she fall or run blindly into a tree? We will never know; but after two unsuccessful surgeries, I had to accept the fact that, at only 8 years old, she would be retired from carrying a rider.

When I bought Annie, she had just weaned a beautiful, champaign-colored colt. He had perfect confirmation; his good looks caught everyone’s eyes. Not wanting to breed solely on the basis of color and looks, but for disposition and athletic ability, I called the owners to find out more about him. He got rave reviews for his amicable personality, great gait, and strong body, so I tracked down the stud that had “done the deed.” Arian’s Golden Sun was found living in California – not exactly next door to facilitate a pasture breeding. This meant artificial insemination.

Not having a clue as to what I was getting into, I signed a stud contract, contacted my vet, and began the long process of playing cupid. Instead of arrows in a quiver, my arsenal consisted of cold semen air freighted from California within hours of collection. It was a marathon: run to the airport to pick up the special container with a vile of semen, get the mare to the vet, have him “do the deed,” return the mare within another 24 hours to “do it again,” then ship the container back. Afterward, wait a couple of weeks, take the mare to the vet for a sonogram to see if she “took,” and start over if she didn’t.

Of course, Annie didn’t “take” on the first three attempts – but hallelujah! She “settled” on the fourth. Then it was just sitting back, pampering her, and waiting 11 months.

The following June, at sunrise on my father’s first birthday after his death, I withdrew from a largely sleepless night on "foal watch" in the barn and went to my own bed to catch a few “zzzs” before beginning the day’s chores. I awoke a couple of hours later and instantly knew that the foal had arrived. My two geldings were frantically running along the fences, whinnying, and looking towards the barn.

There she was, a beautiful champagne-colored filly: big, strong, curious, confident—stunning! She was a gift from my father. Somehow he had a hand in her being born on his birthday.

After imprinting the foal, I excitedly went to pick up my mother to share the news. Lost in her grief of losing my father earlier that year, she expected to spend his birthday mourning his death. The foal changed all of that. Together my mother and I set up folding chairs near the stall to watch the pair, marvel at the miracle of birth and renewal of life, and to feel Dad’s presence among us.  We would name her after him.

The names Bill or William did not, however, offer much inspiration as a name for such a filly. What to do? Then it struck me – I could take his middle name of Lonzo, feminize it with an “a,” and call her Lady Lonza! The Lovely Lady Lonza still rules the pastures.

Shortly after Lonza’s birth, my mother received a small publication from one of Dad’s distant relatives. The thin volume was published by the historical society in a little town along the Mississippi River where my great grandmother, Clara, had her boarding house. The booklet was ostensibly a history of that big mansion – but it really was a tribute to Clara. It chronicled her life there and followed her back to Montana and the "Dun Rovin" cabin. Reading it, I came upon a picture of Clara during their prosperous years. There she was, standing next to her “fancy gaited horse named Lady” with a dog at her side. Here I was – back in Montana, with Dunrovin nailed above my door, my “fancy gaited horse named Lady Lonza” and a dog at my side. This little acorn didn't fall far from the family tree. Chills still run up my spine. 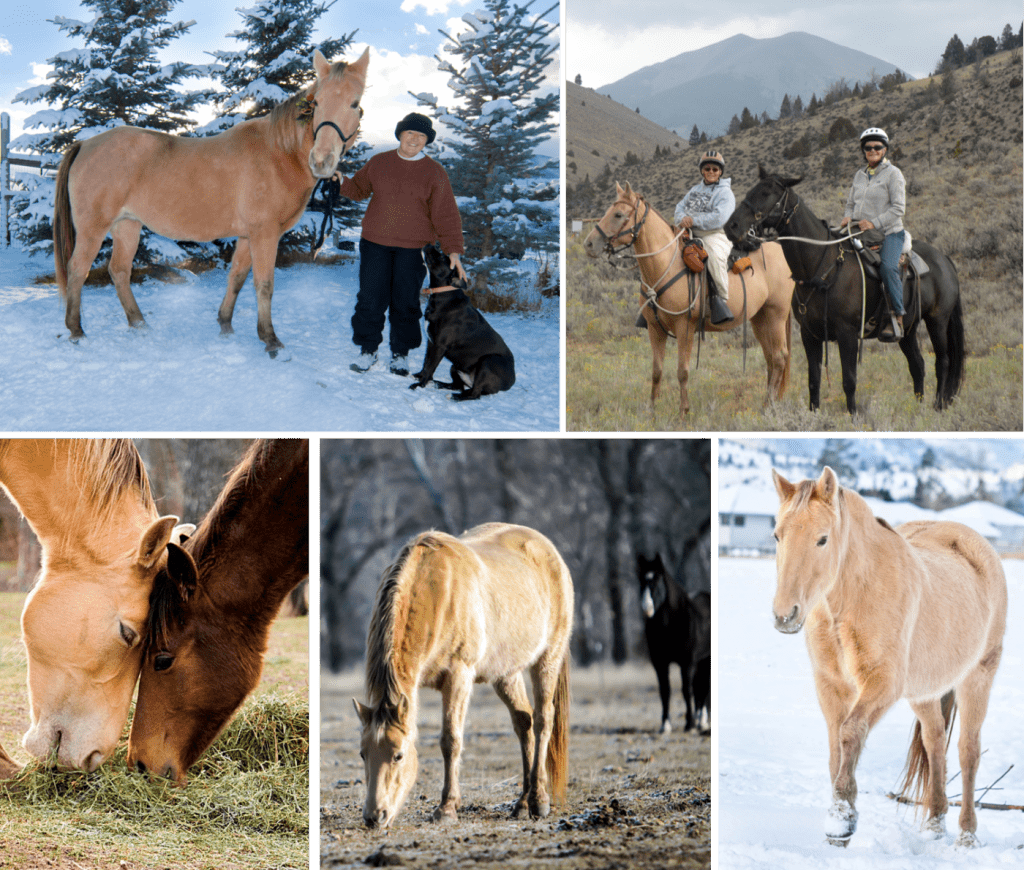