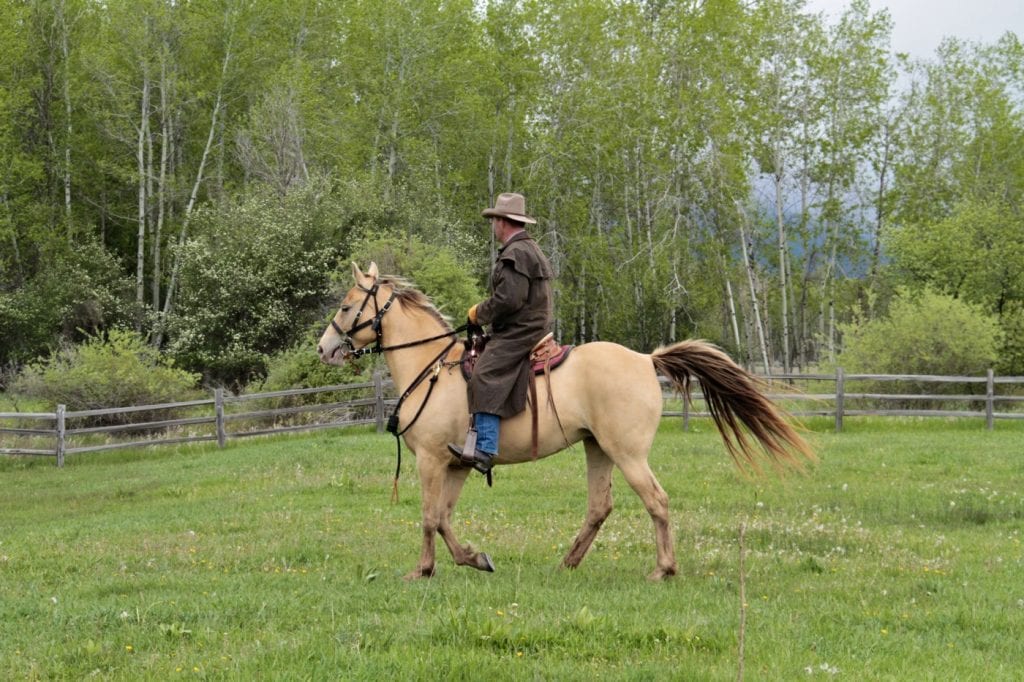 Brandon Carpenter is a family man, and he defines family in a big way. His wife and two sons, his late father and his mother with her new husband, and his siblings top the list, of course. But his family reach does not stop there. Rather it encircles the animals under his care, his neighbors, and his friends. I am grateful to be included in that circle.

It all started many years ago at a horsemanship clinic in Three Fork, Montana. I had just purchased a new horse named Power, who more than lived up to his name. Power was not an easy horse to handle. I came to love him dearly, spending thousands of hours with him in all kinds of different situations as we trained for endurance racing. He would come to be known as my “mane man.” However, in the beginning, he stretched my patience and challenged my skills, which is why I had signed up for the horsemanship clinic in Three Forks.

It would be an understatement to say that things were not going well. Power was getting the best of me. Then my friend Barbara suggested that I go over to Brandon to see if he would be willing to help me. Now you must understand that Brandon was not the clinician getting paid to help people at that particular clinic, although he had done many such clinics on a national level. He is an exceptional horseman with a deep, deep knowledge of Tennessee Walking Horses. But at this particular clinic, he was a participant. This in itself tells you a great deal about the man. He was there to learn. He understands that horsemanship is a lifelong learning process and that each of us has something to teach the other. But I digress…

I immediately took Barbara’s advice and headed Power in Brandon’s direction. He had never before met me. I literally charged in on my unruly horse, introduced myself, and asked for some assistance. Smiling and peppering me with some pertinent questions, he asked permission to ride Power and demonstrate a couple of techniques. With relief, I quickly dismounted and handed him the reins. Power just as quickly understood that the game had suddenly changed. He was no longer in charge, as he had been with me. Brandon asserted himself without rough handling, but with determination and persistence. Power would try to take control by moving his feet, and Brandon would immediately make him put those feet right back exactly where they started. Brandon did not give an inch and did not take it personally. He showed no emotion as he simply insisted that Power stand still. This was the key. Power had lots of go and almost no whoa. He hated standing still and showed his disrespect for his rider by constantly moving – at first a little and then a lot. Brandon taught me that I should tolerate none of it.  Nip it while it was a little and it would never become a lot.

Brandon continued to mentor me for the next couple of days, without my even asking. He kept his eye on Power and me, and by the end of the weekend, I had become a different rider and Power a different horse. I was more relaxed, and what’s more, Power was also much more relaxed. He stopped constantly challenging me as he learned to accept my leadership. I was impressed.

Even though Brandon lives in eastern Montana, a short 450 miles away from me, I was determined to work with him again. Therefore, I began organizing Brandon Carpenter clinics in Missoula at a friend’s barn who was also enamored with Brandon’s techniques. When my first foal was born, I named her Lady Lonza and sent her to Brandon to get her started under saddle as a three year old. I then journeyed to his ranch to participate in the process.

When I opened Dunrovin as a guest ranch, the first event I held at the ranch was a horsemanship clinic with Brandon. Horsemen like early spring clinics to get their horses tuned up for the summer trail-riding season. The problem is that spring weather does not always cooperate. Indeed, a strong April snowstorm brought cold temperatures and high winds. In spite of the uncomfortable conditions, clinic participants just bundled up and became totally engaged. Brandon was unfazed by the weather, while all the horses just got amped up, giving Brandon plenty of interesting material to work into his teaching.

It was pure magic to watch Brandon use his presence and his energy to direct a young, spirited horse in the round pen and to get that horse to “connect up” and demonstrate its willingness to let Brandon be the leader. Brandon explained that horses are social animals. They live in hierarchical bands within a herd. They want structure and they want to know where they belong in the hierarchy. The trick for riders is to use horses’ natural desire to be with herd mates and know their place. This desire can be translated to the horse’s “herd of two” – horse and rider. With appropriate handling, the rider can establish herself as the leader, with the horse’s full cooperation. Movement is the key. The horse that makes another horse move becomes the leader. By moving the horse in a round pen where it cannot hide, the horse accepts the human as its leader within its “herd of two.”

The real magic at the clinic began when Brandon got each student in the round pen to show them that they too could accomplish this and that it was not magic at all. It was careful listening to the horse and responding appropriately, insisting on being the leader without disrespecting the horse. True leadership requires participation and acceptance by both the leader and the follower. Horses understand this if we talk with them in their own language.

This first clinic turned out to be a very memorial event for all involved. Not only did the weather add an exciting element, but also the snow and rainfall increased the water flow in the Bitterroot River. The deep, cold, and fast-moving water made crossing the river on horseback a real adventure. In addition, Lady Lonza’s first foal was born on the night between two days of the clinic. Brandon did not skip a beat. He just folded foal imprinting into his clinic instruction. This new arrival to the herd further excited the horses as they all vied for a peek at the little filly, with mother pinning her ears at any horse that came her way. Dunrovin Guest Ranch was off to a great start with this action-packed weekend of learning and adventure.

Over the ensuing nearly 20 years, Brandon and I have become close friends. His impact on my riding and on the way in which Dunrovin’s horsemanship program has developed has been immeasurable. He will always be a teacher to me. Brandon just has a way with both horses and people. He trusts them; he respects them. He wants to support each and facilitate their coming together to form a true partnership. Everyone involved feels that respect. It is the perfect environment for learning and gaining the confidence essential for horse and rider to truly bond.

Dunrovin has brought countless people with countless horses facing a countless number of issues to Brandon for help and none of them have failed to go away feeling better about themselves,  their abilities, and their horses as a result of their time with Brandon.

About a decade ago, Brandon and I teamed up to do some leadership training for young people in a program sponsored by the Missoula Area Chamber of Commerce. We called our program, Discover Horses and Discover Yourself. Brandon used horses to help kids understand the importance of body language, of being deliberate in their movements, of controlling their own energy to influence the horses’ energy, and of creating a successful picture in their minds. Horses’ prey instincts make them incredibly sensitive to our slightest emotional and mental frames. They can read us like a book. They know when we are serious and when we are not, when we are afraid, and when we are confident and determined. This short video shows Brandon in action during one of our leadership sessions with a group of high school students.

My friendship with Brandon has taken me many places, hosting a variety of learning experiences in a number of different places across the state. Just about a year ago, I took a small group of women who have been riding with me for a number of years to Brandon’s family ranch to learn how to manage cattle using their horses (well, actually the horses are Dunrovin horses that they think of them as their own!). These particular women, whom I have affectionately dubbed the Giddy-Up Girls, form a rather “over-the-top” fun-loving troop of professionals who want authentic experiences that can’t be had in fine hotels or fancy dude ranches. Our 2015 trip became the subject of an article for the magazine Distinctly Montana (turn to page 20).

The Giddy-Up Girls fell head over heels for Brandon’s entire family and insisted that I create more opportunities to work with him. They barely finished last May’s three-day clinic with Brandon before they started planning a similar event for 2017.

Brandon hooks people on his horsemanship ways. He does not have a set formula. You do not go through a series of different levels using expensive, and often useless, gear like some nationally known clinicians. Rather he gets you to watch, to listen, and to seek a deeper understanding of what is going on inside yourself and inside your horse. While teaching the basic principles of sound horsemanship, he asks you to question and to seek insights about each situation from the horse’s perspective. He asks you to address your own feeling, fears, and questions. A horse will hear them loudly and clearly from you:  you must acknowledge and work with them yourself. It is a lesson in life as much as it is about horses.

Our strong relationship over the years has enabled me to approach Brandon with a crazy notion. As our DaysAtDunrovin ([email protected]) web camera network and audio system have become more and more professional, I have been seeing new opportunities for engaging our [email protected] members; and I wondered if it would be possible to bring Brandon’s horsemanship training techniques to horse owners everywhere. A little experimenting seemed in order and I wanted to know if he would be game to help me stretch the limits of this new technology. I asked him if it would be possible for him to mentor one of our staff members in training a horse by using our technology, rather than being physically present. Was our technology up to the challenge of bringing him effectively to the side of our staff member so that he could coach her from afar? Could we engage internet viewers and bring them right into the process of taking a young horse through the training process? It was an exciting proposition, and luckily Brandon was up for this adventure of a different kind.

I will let you be the judge. I encourage you to read our companion article about Training Mystery to see and hear the results. All of us, including Brandon, have been surprised by how effective the experiment has been.

I am grateful for all the Brandon has brought into my life and I hope to have many, many more adventures with him – on the trails, in the round pen and arena, and in front of our web cameras.