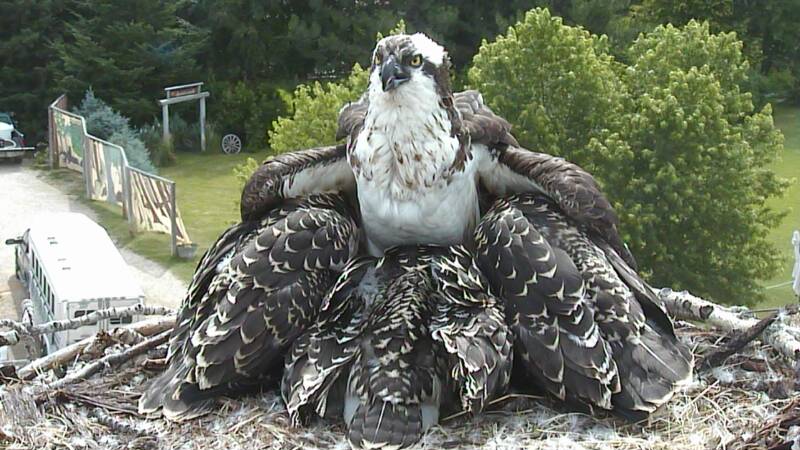 Anthropomorphism is the interpretation of what is not human or personal in terms of human or personal characteristics. It seems that anthropomorphism is natural for people—especially for animals with human-like physical characteristics, like other mammals. Web cameras have definitely expanded our inclination to anthropomorphize to birds. It is almost impossible for viewers of nest web cameras not to ascribe human emotions and motives to the birds’ behaviors.

Until just recently, scientists thought of anthropomorphism as something to be strictly avoided, if not downright ridiculed. Anthropomorphism leads to sentimentality, which distracts from scientists’ ability to view animal behavior with unbiased, clinical detachment. However, as advances in neuroscience have increased our understanding of the genesis of both thought and emotion, we see far more similarities than differences among animals, including humans. A recent article by Melissa Dahl entitled Maybe It’s Time to Take Animal Feelings Seriously, in NYMag.com, gives a good explanation of the shift in scientific attitudes toward anthropomorphism.

Our own Mother Harriet Osprey deserves to be seen as a role model for motherly behavior, human as well as avian. We have watched this magnificent, individual bird since our web camera was installed in 2011. Over the years, she has been called upon to cope with virtually every kind of challenge that mothers of all species face. Unflinchingly, she displays total commitment to her own survival as well as that of her chicks and male partners. 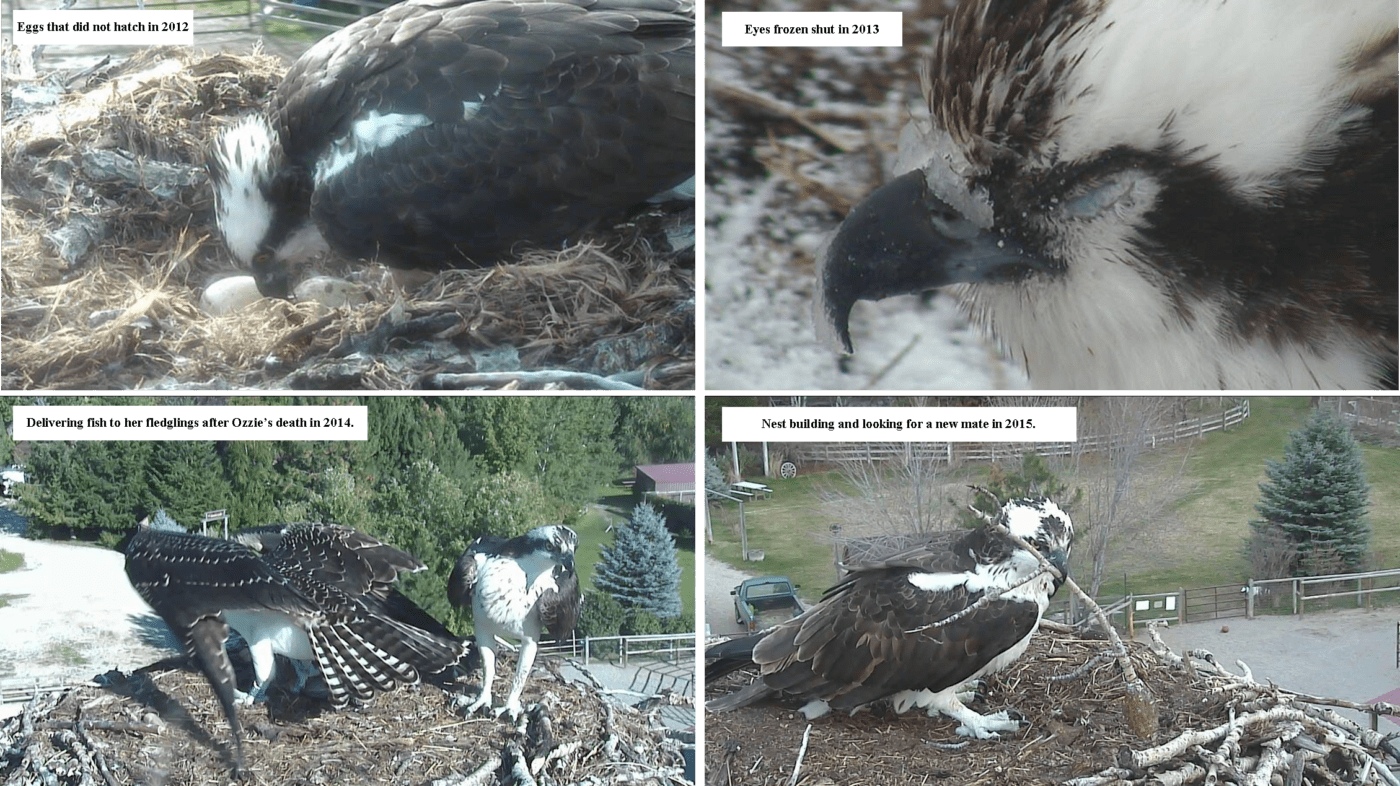 Perhaps what intrigues me most about Harriet Osprey is her sense of acceptance and determination in the face of uncertainty. It is as if the thought of “giving up” is simply not an option in her world. In 2012, when the two eggs that she and Ozzie had laid did not hatch, they relentlessly cared for the eggs for weeks beyond the time when they should have hatched. Returning in 2015 without a mate, she waited and waited to find the right new mate. She spent much of the summer teaching her new mate how to properly play his role.

She doesn’t flee and migrate back to warmer waters when faced with an early spring snowstorm. She hunkers down over her eggs as the wind and rain and snow accumulate on her feathers and freeze in her eyes and nostrils, never moving until relieved by her partner. She has never thrown up her wings and flown away in a huff. Neither does she appear to sulk and feel sorry for herself. She most certainly demands action from her breeding partner in the form of food for both herself and her chicks, but in 2014, when she called and called for Ozzie after his death, she soon figured it out and got to work to do both his job and hers. Normally the first to depart for fall migration, she delivered fish after fish to her chicks and stayed and stayed until the last chick migrated successfully. 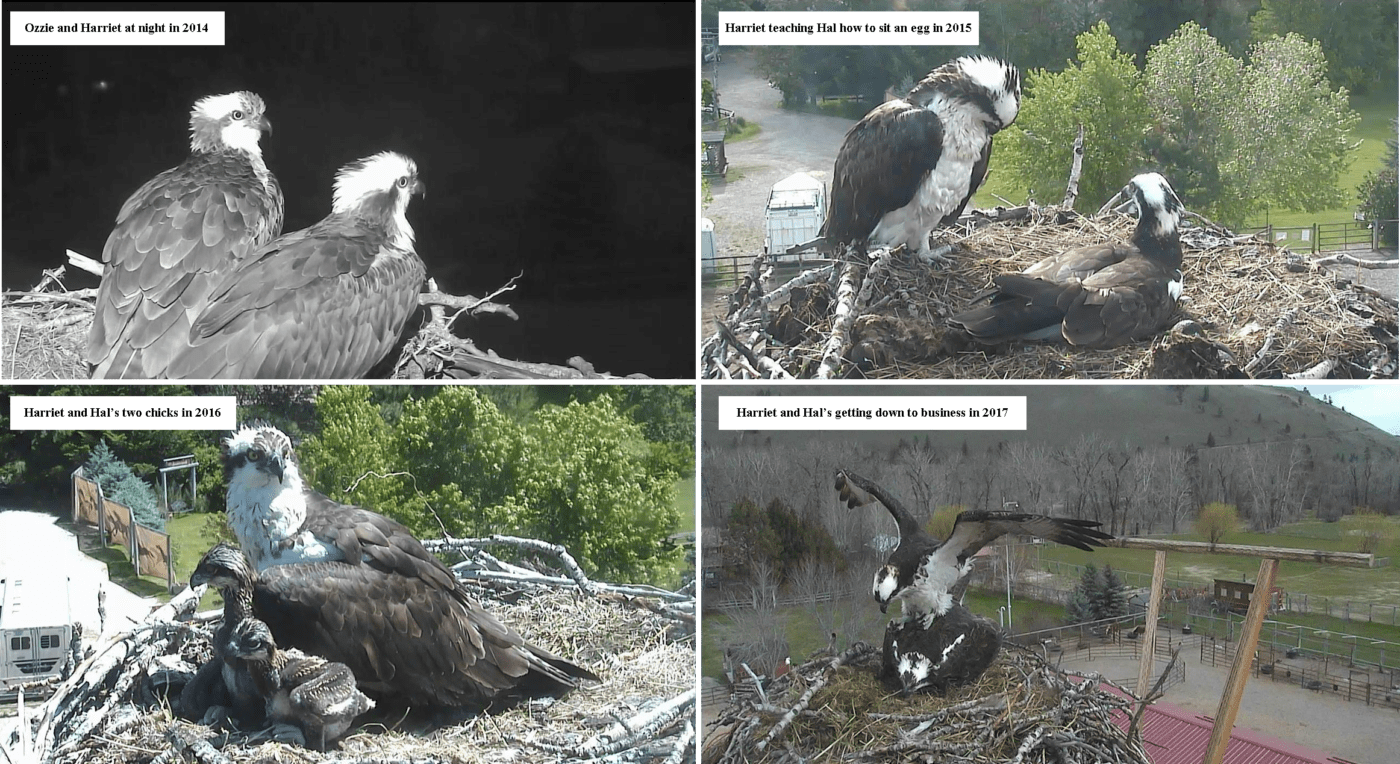 Her ferocity at warding off eagles or other ospreys is legendary: she is quick to sound the alarm and just as quick to jump into the fray to chase away intruders. She continually uses her body as a shelter and defensive shield for her chicks, using her wings to create a shade umbrella, standing for hours on end for days on end to protect them from the sweltering summer sun.

There is nothing easy about Harriet Osprey’s life. It is constant vigilance, constant work. Yet she has prevailed and been very successful in returning and breeding year after year. She and her mate form a true team, with each having a primary role that they occasionally interchange. At times, it occurs to me that rather than anthropomorphizing their behavior, we might do well to rely more on the animal instincts of our own, to follow Harriet’s example of pushing forward without hesitation, but with determination and commitment to doing what needs to be done.