Lady Lonza’s first two foals had been born during the night within 48 hours of her “waxing,” which is the term used to describe the first drips of a mare’s rich initial milk—colostrum—that begins to drip from her teats. So, when Lonza began to “wax” on Sunday, April 30, I rang the bell to commence a “foal watch” in earnest. I notified our Days at Dunrovin community members that I would be sitting up all night in anticipation, to ensure all went well. I was, frankly, a little concerned. Lonza was very big and uncomfortable. At 15, she is now considered an “older” mare and it had been six years since her previous foal. While her previous foals had been born without any kind of problem, I wanted to make sure I was on hand just in case problems did develop.

We had already set up her stall with lots of fluffy straw and installed a light so that we could watch via the web camera. Lonza immediately adapted to the light and seemed unperturbed. She was clearly comfortable and confident in her maternity stall. She was just as clearly uncomfortable with the weight of the foal, shifting often to relieve the hind legs, which showed some swelling. Everyone, including, I am sure, Lonza, was ready for the foal to arrive and relieve her of the burden. Everyone, that is, except the foal itself.

Sunday night found me at the computer chatting with [email protected] members, watching poor Lonza start to have labor contractions. With all fingers crossed, we waited and watched. Then we waited and watched and talked some more. None of us could believe that we were all sitting in front of our computers all night long just watching and waiting. The sun slowly rose and still no foal. We repeated the entire process on Monday night, with all of us getting a little rummy from lack of sleep. By Tuesday night everyone, except Lonza, was toast. She didn’t have an option as nature was taking its course, and she maintained her composure throughout, restlessly shifting her body, biting at her sides, and walking in and out of her stall. 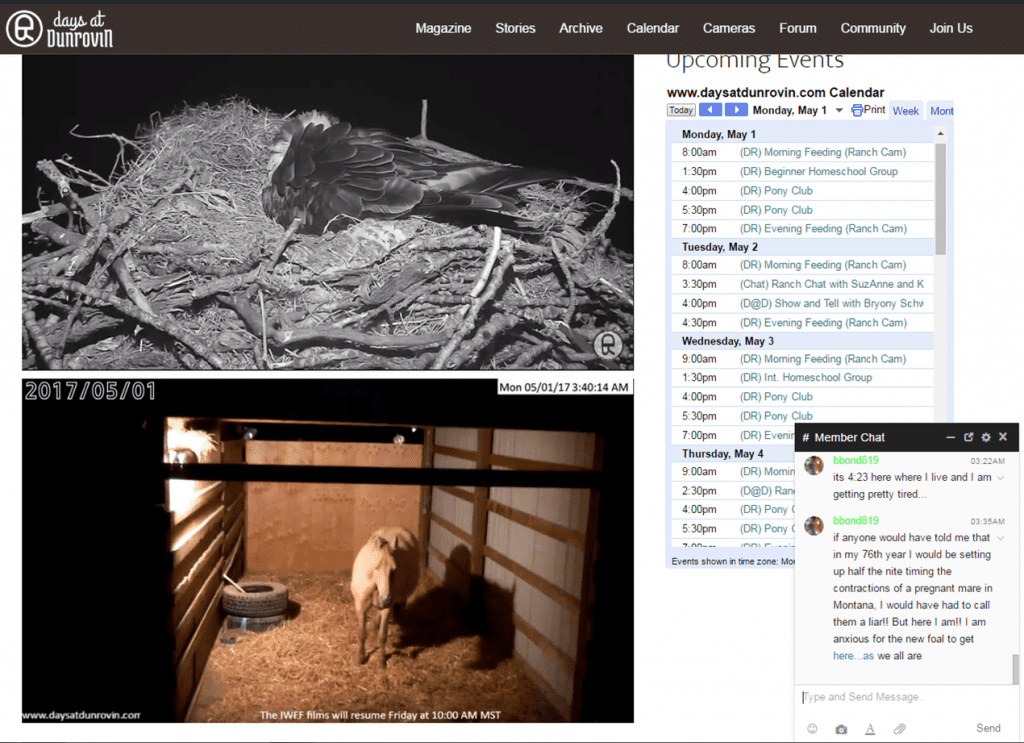 Now, I really began to worry. This was taking longer than any of her previous births. Just when I began to contemplate contacting my vet as night turned to day, she lay down and it was obvious she was entering the final stage. Thank goodness!

Within thirty minutes of her getting down, the foal appeared and began to struggle to emerge from the placenta draped over its entire body. After watching it unsuccessfully try to break free, I went into their stall and removed it from the foal’s head, being careful not to pull it from the mare’s body which might cause it to break, leaving fragments behind. After considerable exertion, the foal managed to get up on all four legs and truly enter this new world. We also then were able to see that “it’s a boy!” What a relief! We had a strong, healthy colt, and everything went well for Lonza.

Lonza showed herself to be the excellent mother she always been, protective of her foal, yet very tolerant of human assistance. Having difficulty finding Lonza’s “milk bar” because of his tall stature, Lonza kept trying to present it to him, maneuvering her body to show him the way. After a couple of hours passed without success—even with us trying to guide him to it—Sterling milked Lonza and we injected the milk into the foal. We wanted to be sure he got the benefit of her colostrums and that he did not become dehydrated from his unsuccessful exertions. After some ineptness on the part of almost everyone, the foal and mare connected, he drank heartily, the mare ejected the placenta intact, and it was evident that all was well. We all caught our breath and began to enjoy the miracle that had just happened before us.

Later that morning our vet, Dick Richardson, visited to inspect both mare and foal, as well as the placenta. The placenta indicated good health on the part of the mare, which provided an excellent start for the foal. He pronounced them both very healthy and suggested that we confine them to their stall for a couple of days to allow the foal’s front legs to straighten. The foal has exceptionally long legs which required them to be bent within the uterus, thus stretching his tendons. Dick wanted the foal’s tendons to have an opportunity to relax before he used them for running and bucking.

Dick also suggested that we confine the mare to “dry lot” and keep her off of the rich spring grass for a couple of weeks. Her abdominal cavity had been stretched to make room for the foal. Should she eat green grass, it could cause her gas, she might roll, and with all that empty space inside her, her guts could twist and cause her to colic.

For me, a really important part of breeding a mare is working with a great vet who provides good practical advice and is ever ready in an emergency. My confidence in Dick Richardson is very well placed. He has seen me through many emergencies and been an invaluable part of our ranch life. He is something of a perfectionist and a true scientist. He is driven to figure things out and persists with issues until he is satisfied that he understands what is happening. One of the things I most like about Dick is that he consistently looks to nature for solutions, believing that his job is to intervene as little as is necessary to help animals harness their own instincts and strengths to live in health.

As my apprehension about the birth dissipated, my mind began to mull over names for our new colt. Naming something has always been a thoughtful process for me. Names have weight, they carry significance and impact the way people view and interact with the one being named. My first son was named after his grandfather, and my second son took the name of my husband’s close brother. These names conjure good feelings and memories and carry the previous generation forward.

It didn’t take me long to conjure up what I believe to be the perfect name that carries many meanings for me. Ozzie’s Golden Echo has multiple origins with multiple memories for me, honoring different parts of my life with animals and people who are no longer with me.

In 2014, we lost Ozzie Osprey to an eagle attack. Ozzie was a truly unique bird, one that garnered the respect and admiration of our web-camera viewers who loved and admired his dedication to his family, his strength and agility, and his very individualistic characteristic of lifting Harriet’s wing to get her to move off the eggs so he could sit on them. Ozzie is missed by many, many people. Hence, I wanted to include the name Ozzie for this foal.

The Golden Echo reflects several things. He is a palomino with a golden mane and tail, so the golden fits his color. But Golden Echo also takes me back to a very good friend, her little filly, and Lonza’s first foal who was killed by a “hunter” at Dunrovin. It mixes both sadness and joy for me. Sally was the first person I ever took on a guided ride. She won a ride that I had given to our local public radio station as a premium for their donation drive. She loved the ride and, as I used to tell people, on a bad day I would blame Sally for getting me into the guest ranch business, and on a good day I would give her the credit. You see, she so enjoyed that first ride that she wouldn’t go home. She hung around for more and we became fast friends as she helped me build this business.

Sally fell in love with Lonza’s first foal, purchased her as a yearling, and named her Sona. In November of Sona’s second year, she was found dead in our pasture, shot with an arrow. It was one of the most horrible mornings of my life to find her dead, and I cannot call the person who did it a “hunter.” A real hunter could never make such a mistake. Sally and I were crushed.

After waiting months to give ourselves time to grieve Sona’s death, Sally bought a new palomino filly and was looking for an appropriate name to give to her. I suggested Sona’s Golden Echo—and she loved it. The filly became known as Echo. Echo lived at Dunrovin for several years, bonding with Lonza and Annie. Then Sally’s husband died, and she decided to move to Denver to be close to her son’s family. Sally and Echo departed, leaving us with broken hearts for our loss, but also with joy for Sally creating a new life near her son and grandchildren. They are all well and happy; we stay in touch through Facebook and occasional visits.

So Golden Echo takes me back to Sally, to her filly Echo, and to Sona, Lonza’s first foal. Ozzie’s Golden Echo is the name that will be used on our foal’s registered papers. In fact, I spoke with Sally upon selecting the name and she said that all along she was telling Echo that her sibling was being born in Montana, as Sally always considered Lonza to be Echo’s stepmother. The wheel turns and we have come full circle.

However, in the days since selecting the full name, I have had trouble actually calling the foal Ozzie or Echo, because those names are already taken by the original Ozzie and Echo. Then my son made the perfect suggestion. Let’s use his initials OGE and pronounce it like the British cheer Oggy Oggy Oggy Oi Oi Oi. Thank you, Jake! Oggy Oggy Oggy Oi Oi Oi has been brought to the Miller-Leeper Family via Sterling’s sister’s husband. It comes from Cornwall. Oddly enough, my hometown of Butte has a strong likening with Cornwall, especially food, in the form of Cornish Pasties. Pasties were the favorite lunches for miners in both Butte and Cornwall. My mother made pasties; I made pasties. They were my family’s favorite meal, and oggy is the slang for a pasty. WOW, Ozzie’s Golden Echo, or Oggy for short, is plum full of meaning for me.