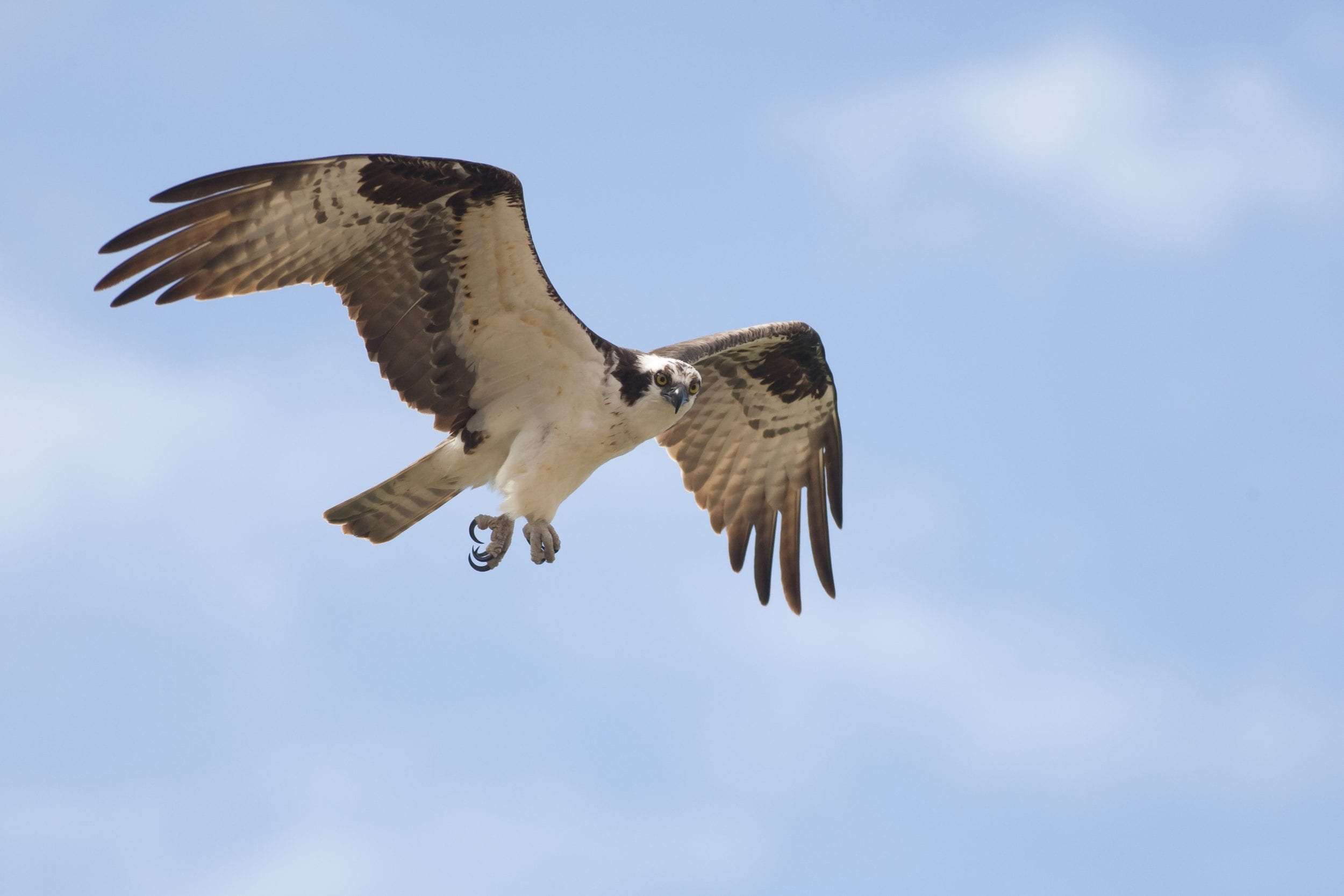 Even before installing the web camera above the ospreys’ nest at Dunrovin, we had referred to the mating pair as Ozzie and Harriet. Our ground-level view did not afford us the opportunity to really get to know the birds as individuals. We occasionally used our binoculars or spotting scope to really bring them into focus and study their individual faces and plumages, but we simply could not follow their daily activities on a regular basis.

Our original webcam was borrowed and was not of very high quality, but we did have an ambient microphone and the equipment did give us a front-row seat for watching life at the nest. All of that changed dramatically when we installed the webcam in the spring of 2011. For the first time, we were able to regularly distinguish the male, Ozzie, from the female, Harriet, and get to know their individual behaviors.

From the start, it was clear that Ozzie loved incubating their eggs and would compete with Harriet for the opportunity. In succeeding years and as our webcam gathered thousands of viewers worldwide, Ozzie became famous for his “wing lift” that he would utilize to try to pull Harriet off of the eggs so he could take a turn. He would literally bend over and use his beak to grab her wing and lift it up, tugging on her to get her up and off of the eggs. He was often successful—and he was often not. It seemed that both birds took pleasure in incubating their eggs. Here are a couple of old videos of Ozzie lifting Harriet’s wing to move her along with some nice closeups of him.

This desire of Ozzie’s to sit upon his eggs got me to question how common this was in the osprey world. Alan F. Poole’s book entitled Ospreys: A Natural and Unnatural History, was published in 1989 and is considered the bible of osprey ornithology. On page 103 he states:

“Both males and females incubate, and both have brood patches, although females generally incubate longer and always take the night shift. Individual males show great variation in the extent of their participation, incubating about 20% – 35% of the time at nests in Scotland (Green, 1976), 26% – 57% in Montana (Grover, 1984), and 13% – 66% in New England (Poole, 1984). It is not clear why such variation occurs. Males that incubate less do not deliver more food to their mates, nor do they spend more time hunting. They just perch more than other males do.”

Wondering exactly how often Ozzie did sit the eggs, I decided to engage schoolkids from across North America in a scientific project to determine what percentage of time Ozzie sat the eggs. In both 2013 and 2014, I recruited schools from both the United States and Canada to participate in my collaborative project called the Awesome Ospreys Science Project. During the two-year period of the project, we collected over 3,000 randomly selected observations of Ozzie and Harriet and determined that Ozzie incubated the eggs about 35 percent of the time and Harriet incubated them for about 65 percent of the time during daylight hours. I assume that the numbers quoted in Poole’s book are also for daylight hours, (although it does not specifically state that, as it should in a scientific book!) This means that Ozzie fell into the lower half of the range given for Montana male ospreys, which really surprised me. It also makes me want to repeat the project next year to compare Ozzie’s incubating habits to Hal’s.

As the first male osprey to come under such great scrutiny via our webcam, Ozzie literally defined for us the male osprey role—and what a great role model he was. He was ever attentive to Harriet and his chicks, steadily supplying them with fish and protecting his nest from intruders. The summer of his death was heartbreaking in several ways. The nest was continually under attack from bald eagles, making Ozzie’s job not just difficult, but dangerous. Then an early severe storm hit at a time when his three chicks were most vulnerable. The river became flooded and churning with mud and debris, making it impossible for him to secure sufficient fish, and his youngest chick died. Then, in mid-August, Ozzie was killed by a bald eagle, breaking all of our hearts and leaving Harriet with their two remaining chicks.

One thing that Ozzie had taught us was that it was he who fed the fledged chicks daily at the nest and it was he who stayed and stayed and stayed until the last chick successfully departed for its migration south. What would Harriet do now that he was gone? Would she take up the job of fishing and feeding the fledged chicks, showing them how to fish, and remain long after her normal departure south to care for them? YES! She did all that. She seemed to know that he was gone and she took up his job.

In the early spring of Ozzie’s final year, I had the enormous pleasure of witnessing his arrival at the nest and his beautiful, but short, mating dance with Harriet. Ozzie would fly high in the sky, then fall down again and again toward the nest, chirping to Harriet all the while. It was spellbinding and joyous. How grateful I am to have been in the right place at the right time for Ozzie’s final mating dance.

We will always miss Ozzie and hold him dear. We were able to retrieve his body from across the river and take it to Montana Fish, Wildlife and Parks. They had him mounted and placed near an ospreys’ nest on the wall of the Montana Wild Center in Helena. He now serves to educate thousands of visitors annually.

What a magnificent bird. What a teacher. And what a privilege it was to be taught the ways of the osprey by Ozzie.