Harriet’s and Hal’s three lovely little chicks broke through their respective eggs on June 1, 2, and 4, 2017. In the following days, the chicks have proven themselves to be healthy and voraciously hungry. Luckily, Hal is up to the task. In spite of the high waters in the Bitterroot River, Hal has routinely been bringing in five to seven fish per day, and some very big ones at that. No one at the Dunrovin osprey nest is going hungry these days. And this means that there has also been little sign of competition between the chicks. It can be very dismaying to watch the younger chicks being bonked by older siblings when food is scarce. Hopefully, the gravy train will continue for this osprey family.

As the chicks grow, so does their need for names. It just isn’t much fun calling them chick one, two, and three!

In the search for appropriate names for the three chicks, I turned to both our Days At Dunrovin members and others engaged with Dunrovin on Facebook, asking them to visit my blog, Three Names for Three Chicks. Over thirty people made suggestions and, of those, five suggested that I choose names beginning with the letter H to form an alliteration with the adult names, Harriet and Hal. Independent of suggestions by others, I wondered out to the nest pole and contemplated the signs with the chicks’ names from the past four years. In every incident, the chicks were named for some unique circumstances surrounding the nest, the laying of the eggs, or the hatching:

2013: The three chicks that hatched were named Percy for perseverance, Hope, and Dilly for diligence in honor of the fact that Ozzie and Harriet’s two 2012 eggs did not hatch in spite of their perseverance, our hope, and their diligence.

2014: The three chicks that hatched were named Lunar, Sol, and Shadow in honor of the lunar eclipse that occurred during the time the eggs were laid.

2015: There were no chicks that year, as Ozzie was killed at the end of the 2014 season and Harriet had to find a new mate.

2016: Harriet and Hal’s first two chicks hatched within hours of each other right around Memorial Day, so we named them Honor and Glory. 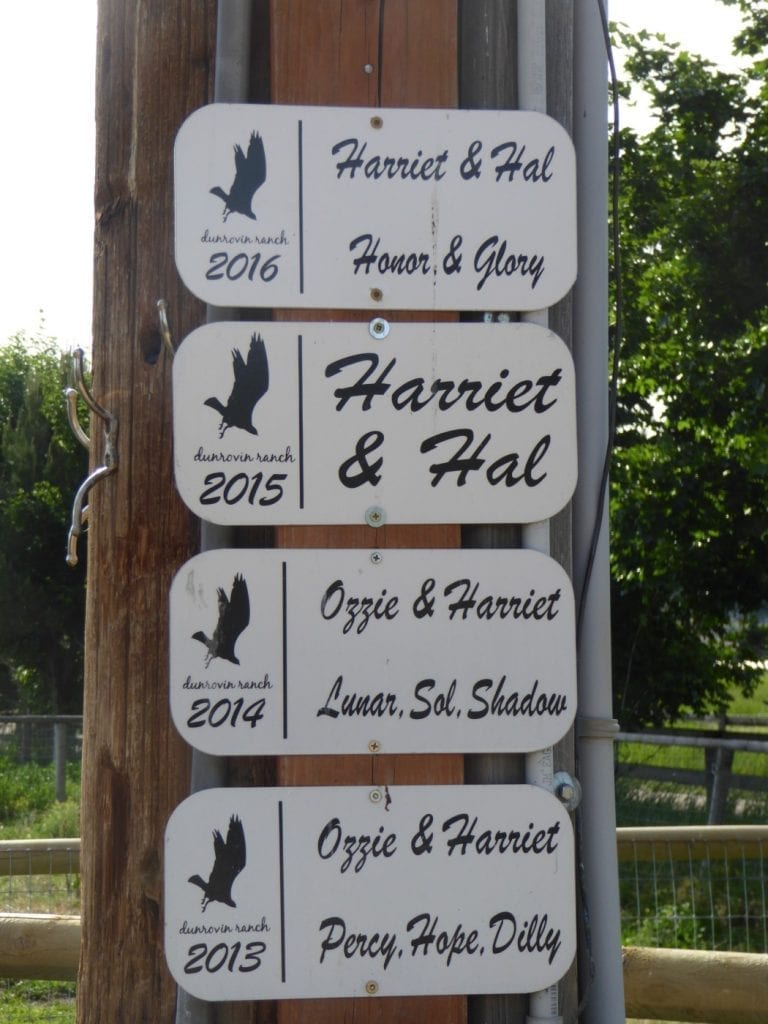 This tradition of using names that reflect the circumstances of the chicks’ births is something that I want to continue. So, following the suggestions of the five people who desired an alliteration, I began to try to put the two concepts together – an H alliteration that signified something unique to this year’s events at the nest. My mind immediately went to the fact that 2017 got off to a very dramatic start with all the various interloping birds at the nest. In fact, in last month’s Dunrovin Ranch Lifestyle Magazine, I had asked the question, Will the Drama Ever End? First, we had a goose lay an egg on the very day that Harriet arrived. After Harriet chased her off, a raven solved the problem of what to do with the goose egg by stealing it. No sooner had the goose/raven episode settled down than Harriet was attacked by a great horned owl.

My mind went to those three interloping birds: a goose, a raven, and an owl. Now, what words could I use starting with H that would signify these three birds? I first came up with Honk, Horror, and Hoot, but I didn’t really like the association of Horror with ravens, although is it a strong literary association. I had lived with ravens in Kodiak, Alaska, and loved their kraa calls. They frequented a tree across the road from my office and I loved hearing the sound. But, alas, their sound does not start with an H.

Darn! ‘Horror’ just wasn’t doing it for me. I am delighted by bird sounds, even those of the birds that gave Harriet trouble this spring, and am filled with gratitude for the heroic raven who stole the egg. Eureka! That’s it! The raven doesn’t have to contribute horror. He can contribute heroism. We can call the chicks Honk, Hero, and Hoot in honor of the three birds that opened the 2017 season with such drama.

Yep, I really like these names. They have meaning in terms of the nest activities. I hope you like them too. Thanks for the alliteration suggestion. It took me down the right path.