Dunrovin’s Animals as Helpers and Healers program as part of the  Monday socials at MontanaSocials.org hosted by the Friends of Dunrovin. The bulletin board has been filling up with photos of lovely calico horses destined to give hugs to people across the country.

Friendships Form as the Herd Gathers 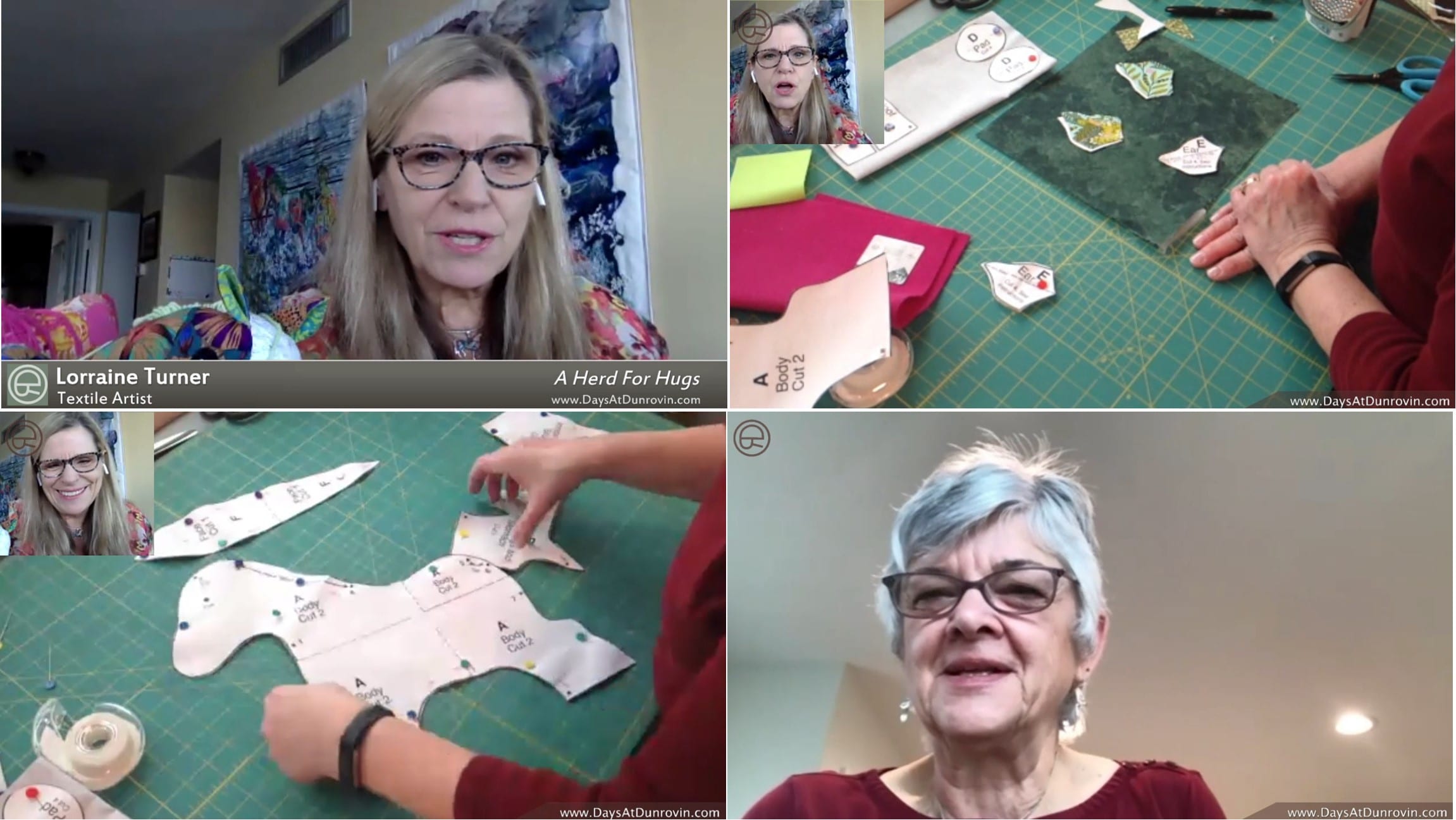 It is clear from their joint instructional broadcast that Lorraine Turner and Loreen Smith are forming an effective team as instructor and student respectively.. Both love working with fabric, are horsewomen at their cores, and are committed to the ideals of the Herd for Hugs Project: sending the healing power of horses across the miles by giving strangers a horse to hug during the pandemic. Equally clear from comments in the Bulletin Board at MontanaSocials.org is the excitement people feel to be part of the project. The project is opening the door to new friendships in locations across the globe!

Livestock brands are often called the “shields of the west” in that they generally denote a family ranch and they are passed down through the generations in the same way that European Royalty passed down the shields from their coat of arms. This past week Brandon invited us to witness the branding of a young colt. As you will see in the recording, while the young horse reacts to the branding, all that is needed to restrain him is one person holding the lead line. When people think of branding they most commonly think in terms of cattle which have much thicker skins than horses. Branding cows requires considerably more pressure and heat than horses, and hence greater discomfort to the animal.

Dunrovin Ranch uses a freeze band on its horses and employs a vet to perform the task. It causes absolutely no discomfort to the animal. Please read about the Dunrovin Brand. 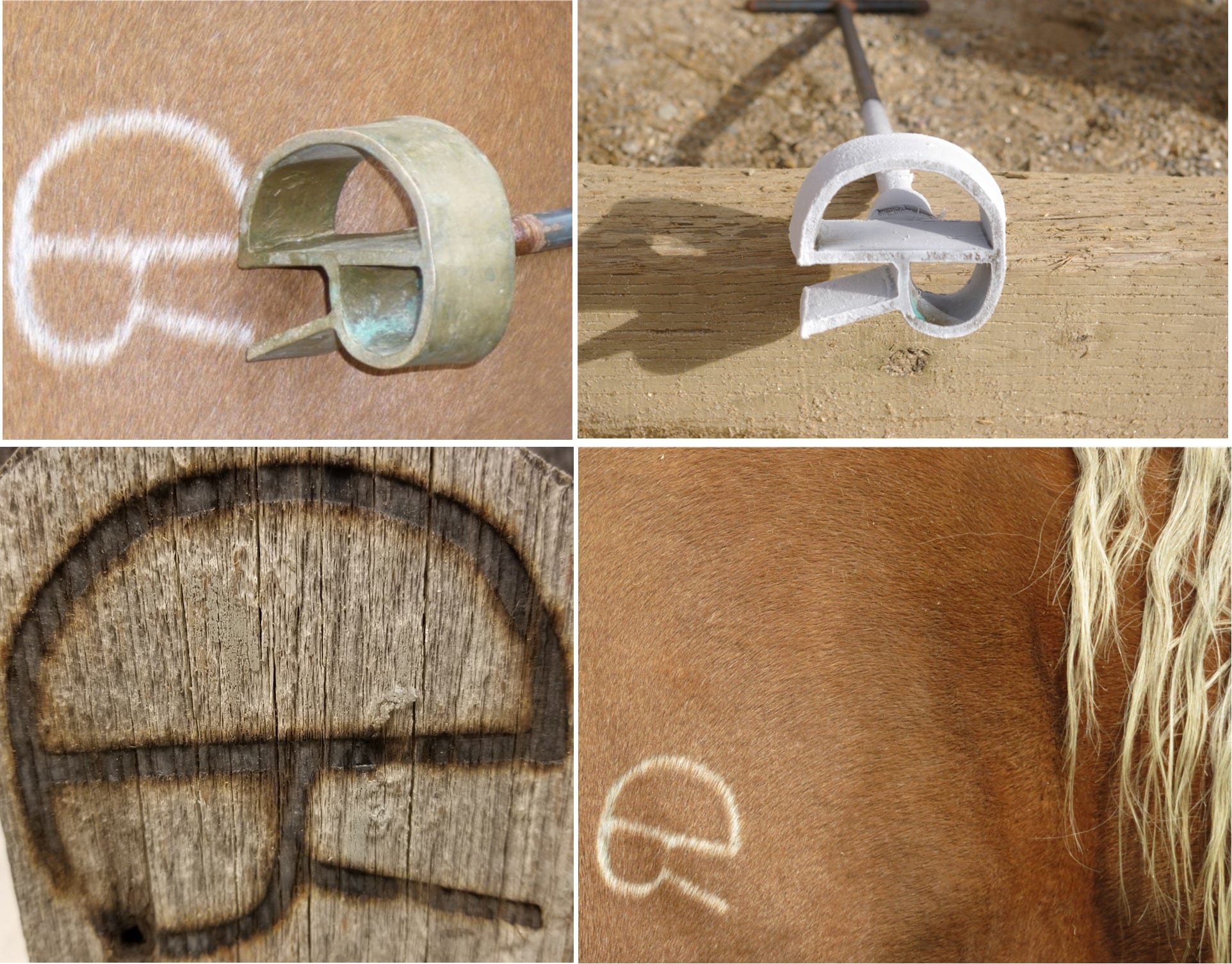 Oggy’s bout with cellulitis (see the This Week at Dunrovin for November 22, 2020) keeps recurring. The disease affects his left hind leg. Not wanting to exacerbate his condition, Brandon and Ashley work him for just a few minutes to reassert Ashley’s role as the leader of the pair before they turn their attention to potentially scary objects with the goal of getting him accustomed and unafraid.  As with last week’s session, Oggy shows his high level of self confidence.  But will he let them put a tarp over him?  Under him?  Check it out here:

In the recording you will notice that Canner demonstrated a touch of his old fear and nervousness, unfortunately! Sometimes, animals just have bad days like the rest of us.

This coming week, Mackenzie hopes that Canner feels better and less nervous and that he can go a little further with his halter demonstration. But, as always, Mackenzie will meet him wherever he is at and go from there. Tune in to hear more about his story and training!

Mackenzie will also work with the DIVAS to do some target training. He and Michal have switched it up last time to LEAVE IT training because they have some questions about how to make sure they were good around food. So, if you want some fresh ideas on how to get your animals loading or moving about at liberty with you, be sure to tune in!

Author, horsewoman, and master storyteller, Lynn Baskfield explains the literary devices she employs during her storytelling workshop. Storytellers and writers may need help to break out of being emotionally trapped by their story. Her story wheel encourages people to take oft-told, familiar stories of their lives and look at them from an entirely different perspective. She then tells us all a deeply personal story about losing her daughter and how forcing herself to find another perspective helped her heal.

Dr. Anne Perkins is a natural born teacher in love with her subject matter. Her enthusiasm and her deep knowledge of the scientific studies that are revealing the nature of the human and animal bond were on display with her first presentation. She acknowledges that many scientific studies have their roots in the anecdotal stories that people have shared about their observations about and experiences with their own animals. It is the stories that people tell about animals that often generate the hypotheses that scientists test. Please watch her presentation to learn about two very cleverly designed research projects. They clearly demonstrate that horses are able to read human emotions and intentions.

We hope you didn’t miss our broadcast of this important and beautifully produced film about the healing that takes place between veterans experiencing PTSD and wild and fearful mustangs that endured their own trauma when they were torn from their herds, captured by the government, and kept in small enclosures waiting for an uncertain future. The pain of both parties is evident as is the joy and healing that comes with trusting one another. Luckily, producer David Glossberg has just made Mustang Saviors available for viewing through Itunes.

The film is truly a labor of love by David Glossberg. As he learned of the tragic suicide rate among US military veterans, he asked himself the simple question: “What can I do to help?” That fact that he had never before made a documentary film or had any outside financing to do so did not deter him. He jumped in with both feet, following the story as it led him across the country. HIs story is nearly as compelling as his film.

Oggy’s Owie Bedevils Us All!

By Monday evening this past week Oggy’s lower left leg began to swell again and was a little warm to the touch.  Time for the vet! Our vet arrived on Tuesday afternoon with the intent of performing a sonogram to see if the inflammation from the cellulitis had caused some scar tissue where the infection persists. However, when he tried to shave Oggy’s leg in preparation for the sonogram, he discovered that his electric shears did not work, Unfortunately, Dunrovin Ranch’s old shearers were not up to the job either. This meant a return visit for Oggy.

Whenever the vet visits Dunrovin, he is sure to line up other horses that might benefit from a check. Since Matt is the new Dunrovin vet, we thought it would be good for him to check both Garnet’s and Chinook’s eyes. To be able to closely examine their eyes, the vet wanted us to take them to a very dark location, so we attempted to bring them into the tack room, close the door,and turn off the lights. Garnet, our laidback boy easily accommodated us; but “ Mr. Nervous Ned” Chinook was having none of it. We were only able to get him to step in with his front feet, which proved enough for Matt to examine him.

Chinook has had moon blindness (or uveitis) since 2017 which has blinded his right eye. By having him wear a special uv-filter mask for the past four years, we seem to have arrested the progression of the disease; but wanted to make sure we weren’t missing anything and thankfully, Matt reconfirmed that Chinook has not lost any vision in his right right and agreed that the mask was the best way to safeguard against future loss.

About a year ago, Garnet’s left eye became cloudy which caused us and our previous vet to think that he too may have developed uveitis. Garnet also wears the special uv-filter mask. However, we recently saw significant improvement in Garnet’s eye and wanted to have it re-evaluated. Good news! Garnet’s had lost no vision in either eye but should probably continue to wear the mask because of his history.

Matt returned last Friday morning to complete Oggy’s examination with a sonogram. The photos below tell part of the story: Oggy was gathered from the field, had his lower right leg shaved, made no fuss about going into the tack room where it was dark, emerged about a half an hour later with a bandage, and returned to the field. 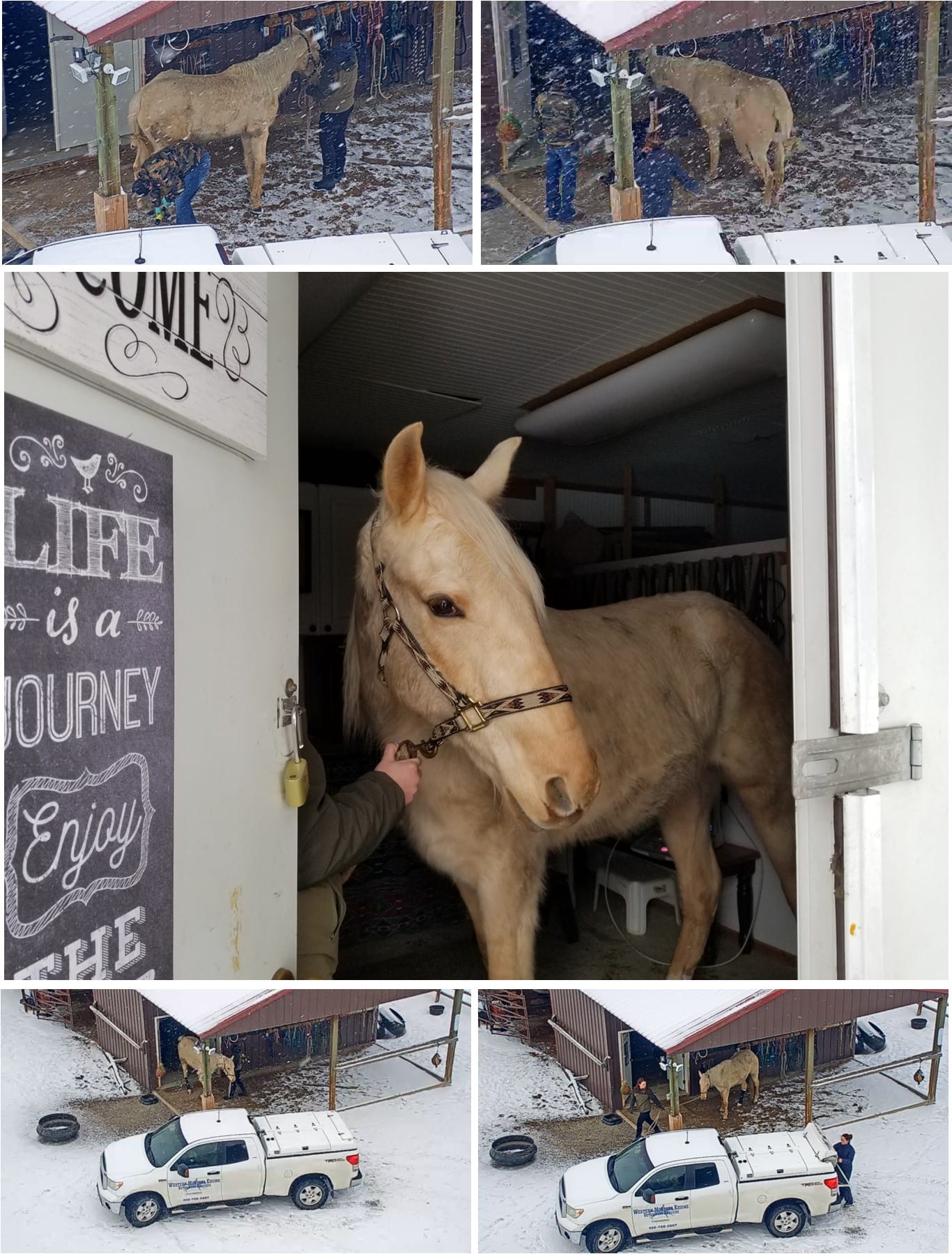 That was the easy, inexpensive, and positive part of the story. The sonogram revealed that scar tissue was forming between Oggy’s tendon and its sheath. This can result in a lifetime of joint pain for Oggy. It does not impact its function, but with heavy use, he may again limp and favor that leg. Diagnosis and treatment of the condition are expensive. We will treat it aggressively right now and let time tell us what the long term impact will be on Oggy’s abilities.

What is it with light colored horses and mud? Perhaps it is his age. He is a gangly teenager after all!  Here’s Oggy, going for the “pinto” look. When the Sky Turns Pink!

Montana is known for its spectacular winter sunrises and sunsets. The low angle of the sun in the southern sky frequently creates that intense pink alpenglow that entrances us all. Here’s a panel of photos from the different webcams of a January 19th pink extravaganza! 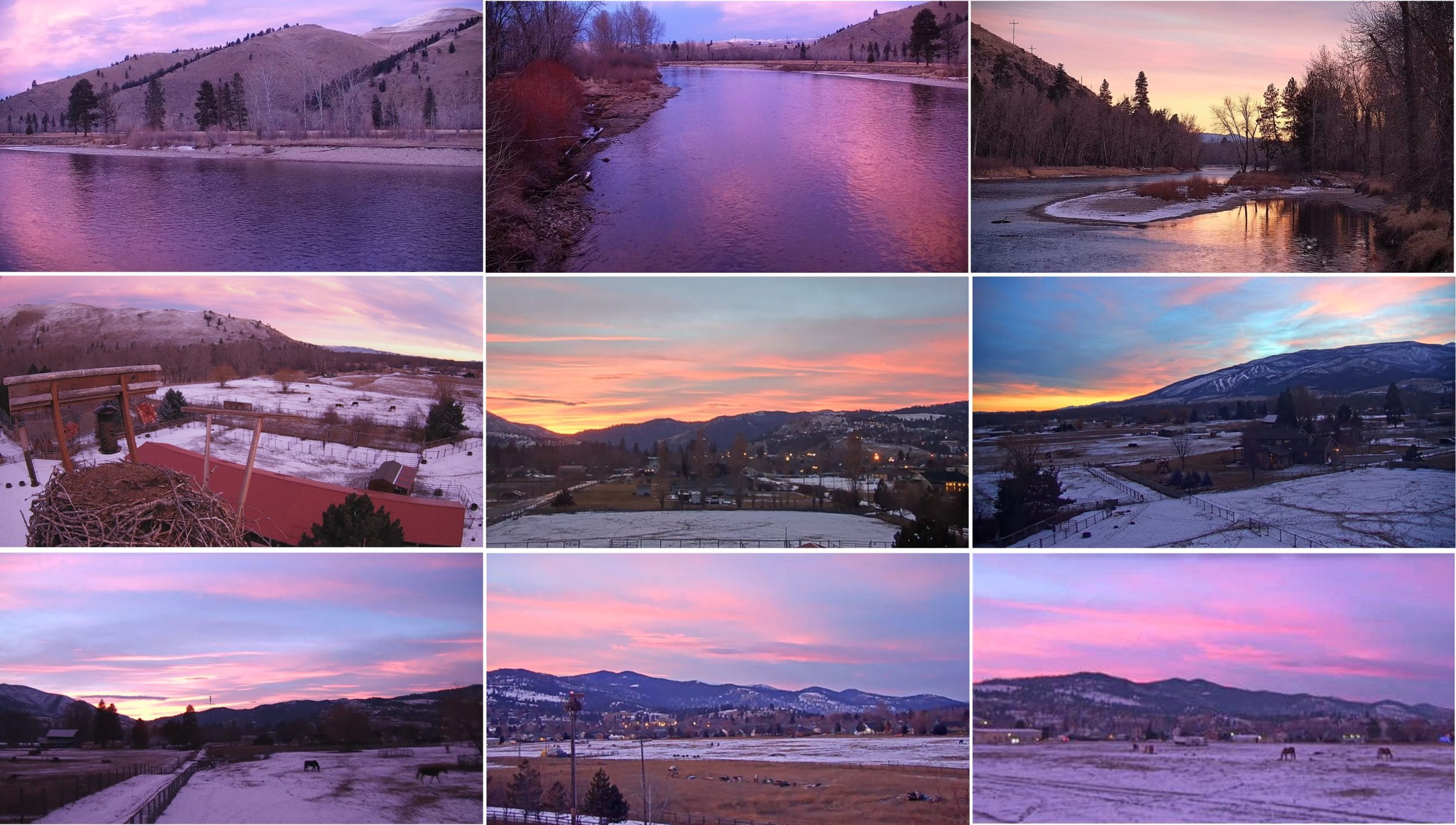 If you have 5 minutes to relax, you may want to grab a cup of tea and watch this video of that colorful evening when the night descended accompanied by some soft piano playing.

The Monday's broadcast schedule at MontanaSocials.org is full with sessions  with exciting guests:

James has just added a map to MontanaSocials.org website that displays a photo at the location where each calico horse was sewn for A Herd for Hugs. It’s never too late to join and add your horse to the herd. All of the instructional broadcast recordings can easily be found by clicking on the Previous Broadcasts button.

We are excited to hear from Equus International Film Festival founder, Janet Rose on Monday at 7PM to learn not only about the festival but also about her role at the Montana Center for Natural Horsemanship. Janet has had a long career with documentary films focused on wildlife, nature, and equines and can give us all a behind-the-scenes understanding of what it takes to put on an international film festival.

Finally, James has been able to turn on the water to let it spray over his “tower of junk” and turn it into an ice sculpture that resembles...well, we’re not exactly sure! Stay tuned as continued low temperatures add more layers to the structure.

Our caption contest has started!!  First submission was a tribute to poetry:  “Riming Junk” --Get it?  (clue: Rime = rhyme)  C’mon, YOU can do better than that! 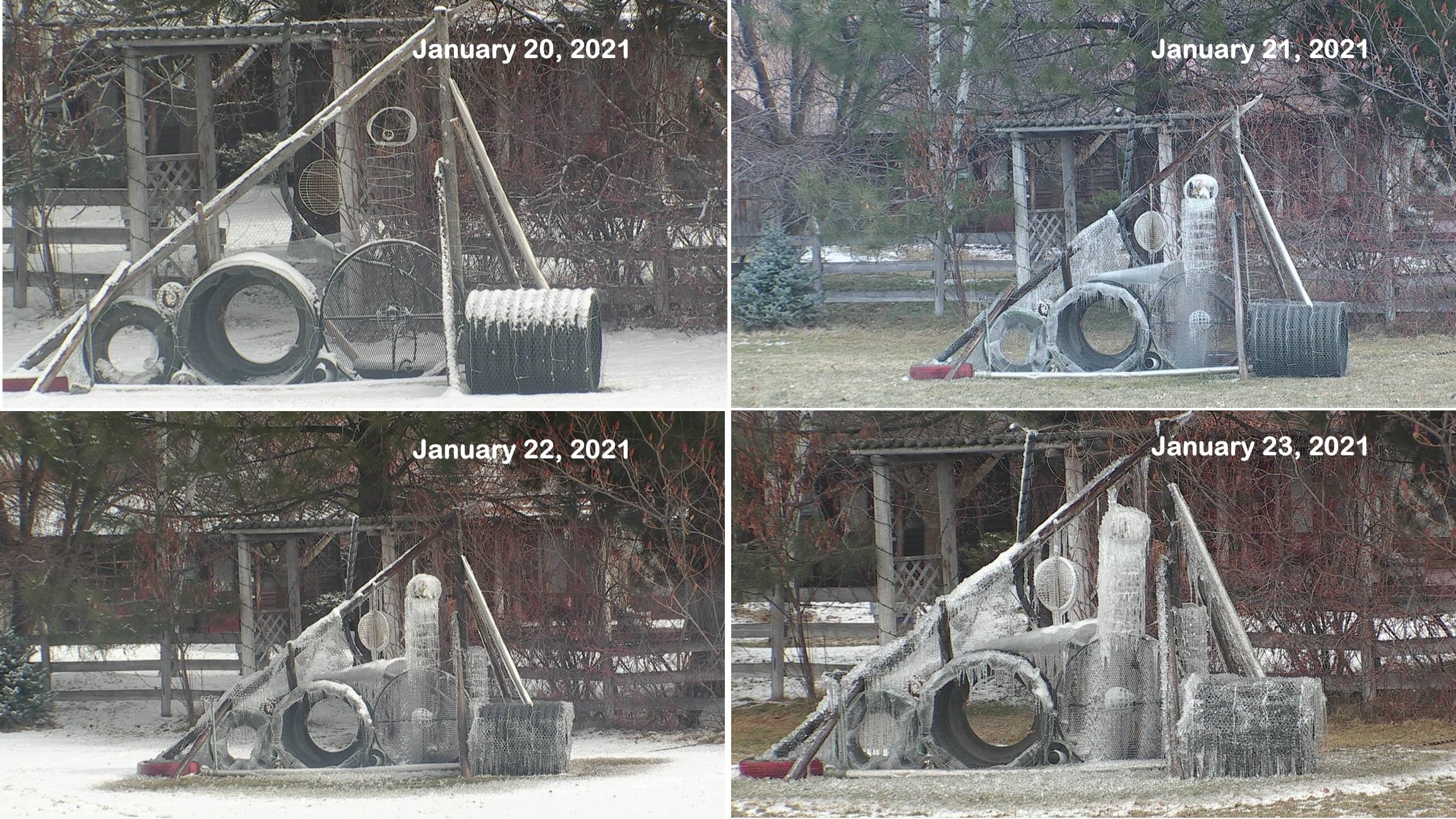