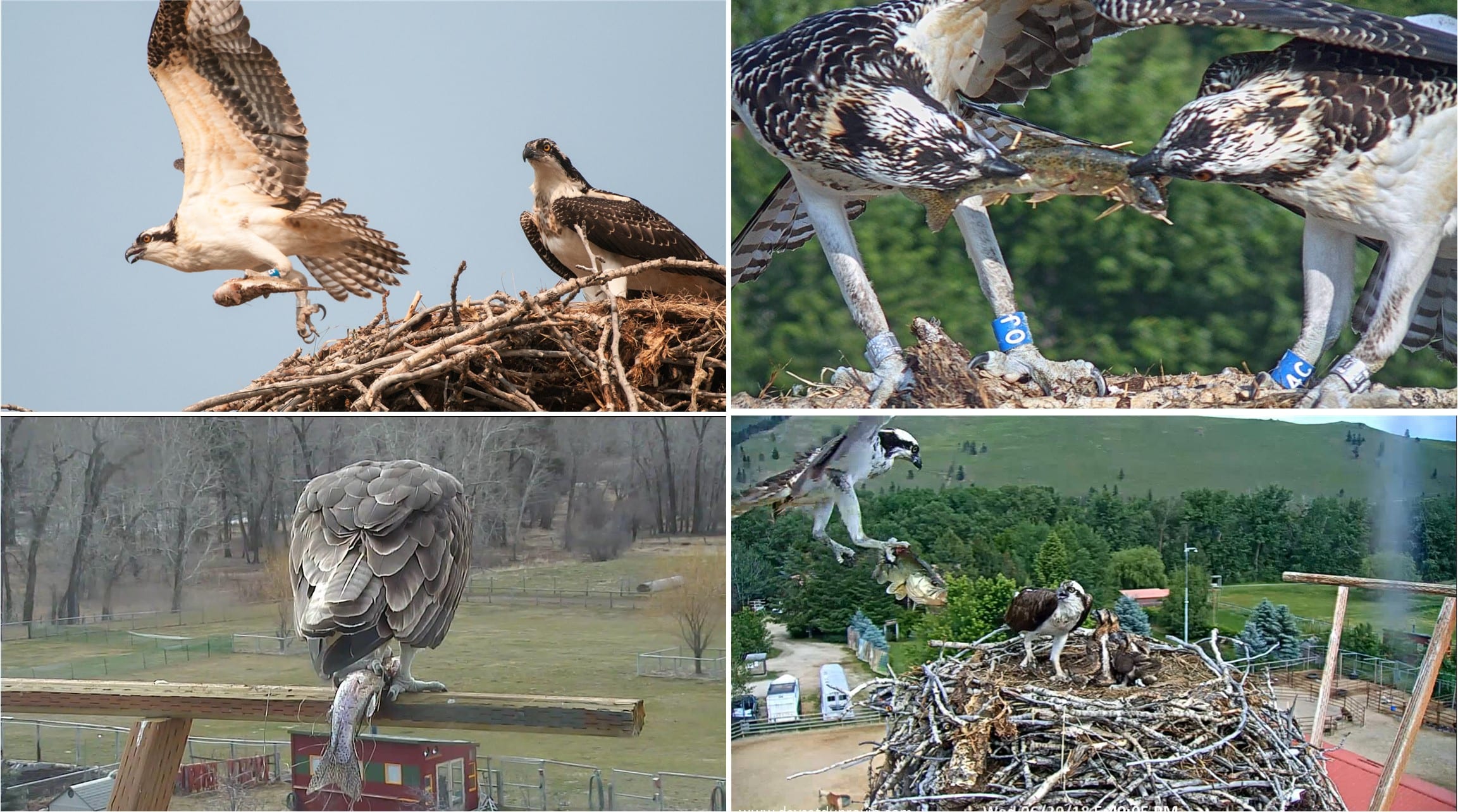 Fish make up 99% of the osprey diet. Osprey are not particular about what fish species they eat and will generally eat what is most easily accessible. On rare occasions, Ospreys have also been known to prey on rodents, rabbits, hares, other birds, and small amphibians and reptiles.

North American Ospreys have been known to eat more than 80 different species of fish. Usually, there are two or three fish species that dominate the diet of ospreys in a specific area. Trout, cutthroat, and bull trout are native fish species of the Bitterroot River where Hal and Harriet fish. In addition, rainbow, brook, and brown trout have also been found in the Bitterroot River.

One might think that all this time around water would mean that ospreys drink the stuff, but they typically don't. It seems that their diet of fresh fish gives them enough water.

Ospreys are not known to cache fish. Leftovers are sometimes ignored and left in the nest. It is not uncommon for a ranch hand to find leftover fish in the horse corrals.

Ospreys hunt in flight; it is rare to see them hunt from a perch. Gliding 30-100 feet above the water, they use their excellent eyesight to look for fish just under the water's surface. Once they've spotted their prey, they hover above it, then dive towards the water. At the last moment, before hitting the water, the osprey swings its legs forward and bends its wings back, so that its feet hit the water first. There is often a wild display of splashing and struggling as the bird makes contact with a fish.

Even though ospreys have nostrils that open and close and thick plumage to protect them during a dive, they can't swim. They must use their powerful wings to lift them out and away from the water with their prey in their talons. On a rare occasion, an osprey will drown after getting its talons caught in a fish that is too heavy to lift.

If you are lucky enough to see an osprey catch a fish, you will notice that its wing beats are almost horizontal when it is lifting the fish out of the water. This is when some of the greatest acrobatics occur, because once the osprey clears the water with a fish, it may re-position the fish so that the catch is headfirst to cut down on wind resistance.

Occasionally, you may witness other acrobatics. Ospreys and eagles fish in similar habitats. Sometimes an eagle will battle an osprey for its catch, forcing the osprey to drop the fish. If you are lucky enough, you may witness the eagle catch the osprey's fish in mid-air.

Hunting success depends on the skills of individual birds, weather, and water conditions (like the tide in coastal areas). Still, dives are quite successful. At the lower end, 1 in 4 dives will result in catching a fish. In ideal conditions, ospreys will catch a fish 3 out of 4 times.

Since they rely on fish as the main source of their diet, ospreys are closely associated with water. They fish in both fresh and salt water; hence they can be found near rivers, lakes, large stream, reservoirs, coastal estuaries, salt marches, and ocean shores.

Osprey are indicators of water quality

Humans and wildlife are intricately connected to each other and to the earth, which we all share. Our ability to manipulate the environment to seemingly better suit our needs, and the close connection human actions have with wildlife populations, presents us with a great responsibility and unique challenge.

The earth’s ecosystems are so intricately woven and delicately balanced that even seemingly small changes or disruptions can have long-reaching, devastating effects. The effect of human actions on wildlife became clearly evident in the 1950s and 1960s when populations of ospreys and other raptors, including eagles, brown pelicans and peregrine falcons, in the United States dramatically plummeted to nearly unrecoverable low levels. Scientists linked the population declines to the widespread use of DDT (dichlorodiphenyltrichloroethane)as a pesticide. To reduce insect damage and enhance productivity, agricultural crops across the country were sprayed with DDT. Water runoff from snowmelt, rain and irrigation carried the deadly chemical into water systems where fish and other aquatic organisms were poisoned. Also,  contaminated insects and plants were eaten by fish and small birds, thus passing the poison directly to them. Those fish and birds were then eaten by raptors, which accumulated the chemical in their bodies. The accumulation of chemicals in organisms in increasingly higher concentrations at successive trophic levels, or higher steps in a food chain, is called biomagnification. Scientists found that DDT accumulates in the fatty tissues of birds, mammals and fish and that it passes through food chains. In  other words, in the case of ospreys, the birds fed on large quantities of fish, which had eaten insects. 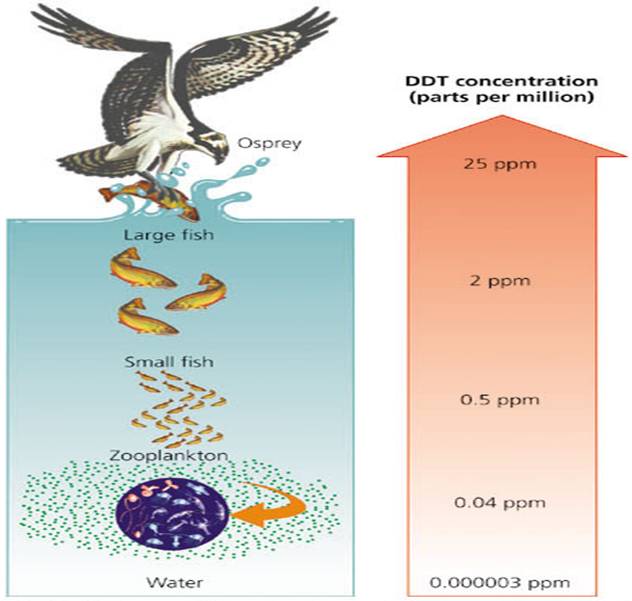 Since ospreys can live almost anywhere there is shallow unfrozen water with safe nesting sites and plenty of fish, it's no wonder that ospreys are found on every continent except Antarctica.dependence on water makes them one of the most widely distributed predatory birds. Ospreys that breed near water that freeze in winter, such as in the norther latitudes of the Northern Hemisphere, migrate in the spring to their summer breeding habitats and return to southern waters during the winters. I is only during migration that ospreys are found distant from water.

In North America, ospreys are found from Alaska and Newfoundland all the way south to Florida and the Gulf Coast. Montana serves primarily as a breeding ground for the industrious birds. Below is a copy of the map from Cornell University's website AllAboutBirds.org. 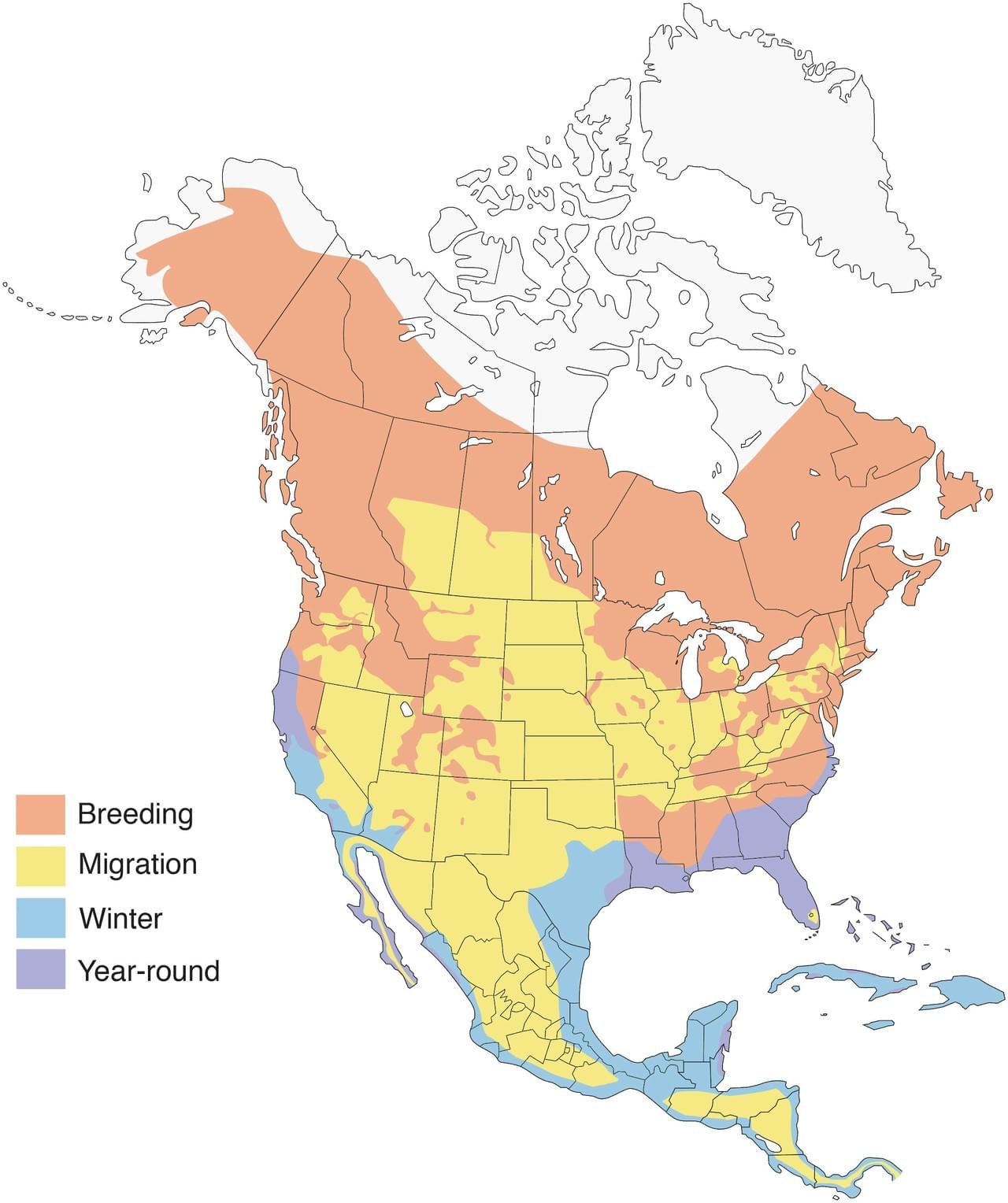 Notice that Western Montana falls contains only breeding pairs of ospreys who migrate to southern areas during the winter, non-breeding season.

Most ospreys breed in one location and spend winter in another. In parts of Australia and the southern United States, however, some birds will remain at the nest site year-round. Ospreys who do not migrate save vast amounts of energy and can focus on foraging, nest building, and raising their young. Non-migratory populations breed between December and March, while migratory populations often don't return to the nest to start breeding until April or May. In addition, the early bird gets the worm, or in the case of ospreys, the non-migrating ospreys get to choose the best nesting sites near the coasts.

Scientists learn about bird migration by placing bands on the leg of birds that do not inhibit them in any way, yet allow scientists to track their movements. Occasionally, scientists also affix small radio transmitters on the back of birds to follow their daily movements.

While we'd love to have our beloved ospreys at Dunrovin all year, like most northwestern ospreys, they migrate for the winter. We're not sure where they go, because they are not banded or radio tagged, but here is some great information from Dr. Erick Greene of the  Montana Osprey Project (University of Montana) regarding osprey migration in 2013:

To give you an idea of how spread out osprey migration can be, in collaboration with our research colleagues, last summer we put satellite transmitters on some ospreys at two nests about ten miles from the Hellgate nest in Missoula, Montana. The adult female spent the entire winter in one very small bay on the Nicaragua-Costa Rica border on the Pacific Ocean. The bay must be a great place to fish, since she barely flew more than several hundred yards every day all winter. At about 8 AM on 29 March she started flying north. She is headed back up towards Montana, but she is still in Mexico now. Her mate spent the winter in a mangrove swamp in Mexico on the Gulf of California. He just started north a few days ago, and he is crossing the Sonoran desert now.

Often, the female osprey will take some of her young with her on the beginning of her migration to show them the ropes. Usually, they split up along the way. The male adult osprey will stay with any lingering young until they are ready to leave the nest. In the summer of 2012, the adult male at the Hellgate nest in Missoula, Montana stayed to help one of his offspring who had a wing injury.

In North America, young ospreys follow the coastline south to Central and South America in their first fall migration. Typically, young ospreys will remain south for one-and-a-half years before returning North to establish a home territory, seek a mate, and build their first nest. Most young osprey pairs will not successfully breed until they are three years old.