Our little Oggy is growing up! He carried a saddle for the first time. While Oggy and the other horses continue to dominate the center stage of Dunrovin’s  Animals as Helpers and Healers program, canines made a grand entrance this week. In her final presentation for the program, Dr. Anne Perkins walks us through man’s oldest human/animal partnership with canines and discusses the many ways in which they have contributed to our lives.

It was a BIG DAY for Oggy this past week. Ashley has been doing such a terrific job with Oggy that Brandon thought that both she and Oggy were ready to try saddling up - and indeed, the process went very smoothly. Congratulations to all three! Oggy is beginning to look like a REAL guest ranch horse with that saddle on his back.

As Ashley put him through his paces carrying the saddle, he resisted only once. It is not uncommon for a horse to react during a sharp turn because that is when the saddle is most likely to shift. This is exactly when Oggy showed some frustration with this new thing on his back. It is clear from Oggy’s general acceptance of the saddle that he is rapidly approaching the point where he can pull a stone boat.

A Herd For Hugs 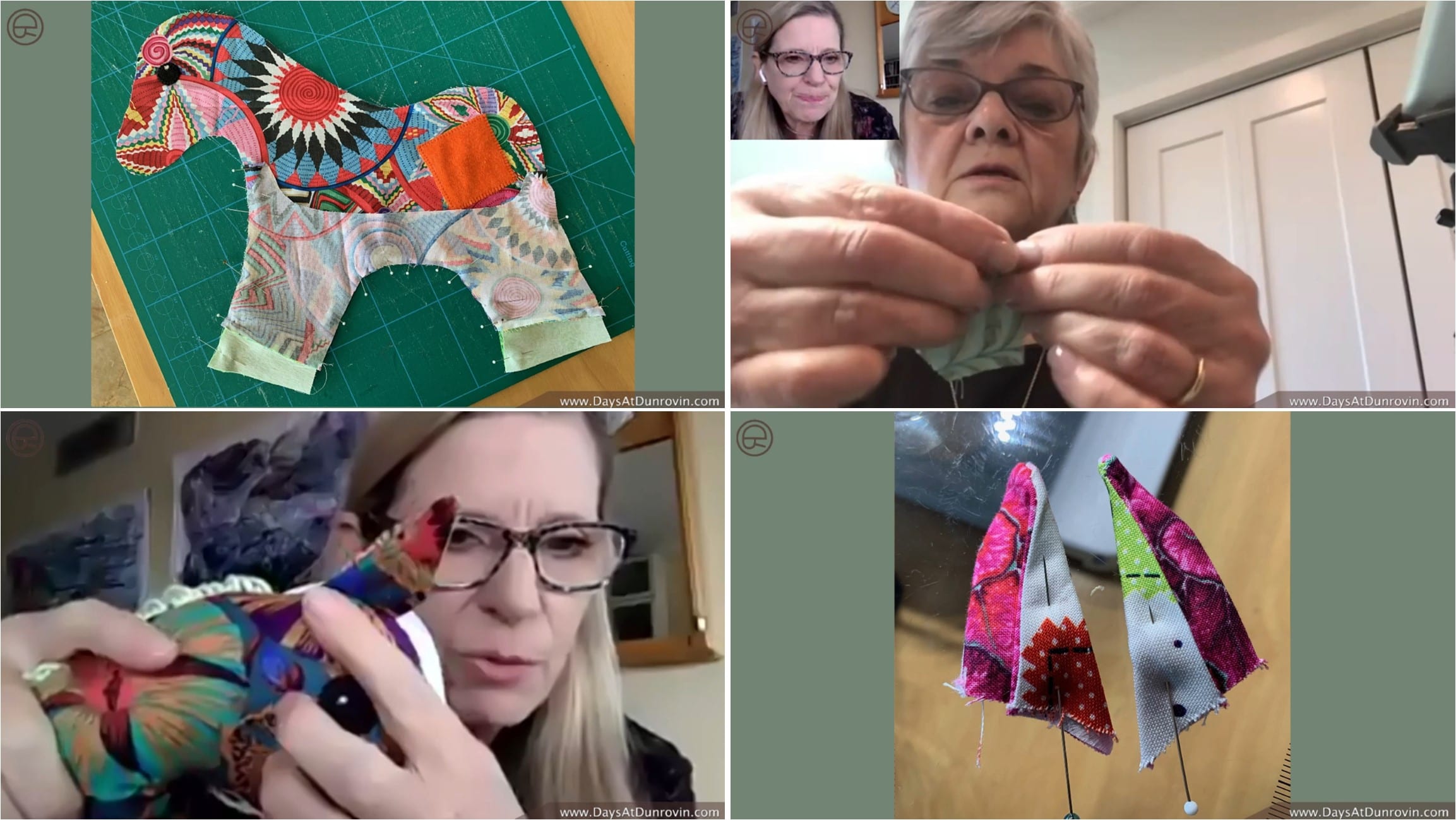 From Top to bottom

Ears and hooves were the topic of the week, and they truly take some patience and focused attention. Loreen and Lorraine carefully demonstrated each step. However, it seems that Mr. Murphy from Murphy’s Law Office arrived at Dunrovin Ranch to gum up the broadcast which resulted in numerous technical difficulties throughout the broadcasts. James did his best to patch together the recording to make sure that all instructions were clear. Thanks, James!

Calico horses are popping up all over America and will soon be galloping into the arms of people who need a little extra TLC during the pandemic!  The map that James created to show where each calico horse was made has been filling up. Go to MontanaSocials.org and scroll down to the map. Click on each horse symbol to see a photo of the calico horse made at that location along with the creator’s first name and city of residence.  Like the Pony Express, we are connecting Americans!

The Complex and Beautiful Movie, UnReined

Marica Rock is a documentary filmmaker who teaches at New York University. When a friend brought her the story of how an American-Israeli equestrian, Nancy Zeitin, had defied the political tensions, outright war, and familial religious strife to work with Palestinian young people to form an equestrian team, she knew she had to make a film about such an extraordinary accomplishment. Marica Rock’s film (with co-producer Naomi Suttmen-Bass)  UnReined shows us how Nancy’s love of horses and her commitment to athletic excellence gives her the strength and passion to rise above the personal and political chaos that surrounds her. 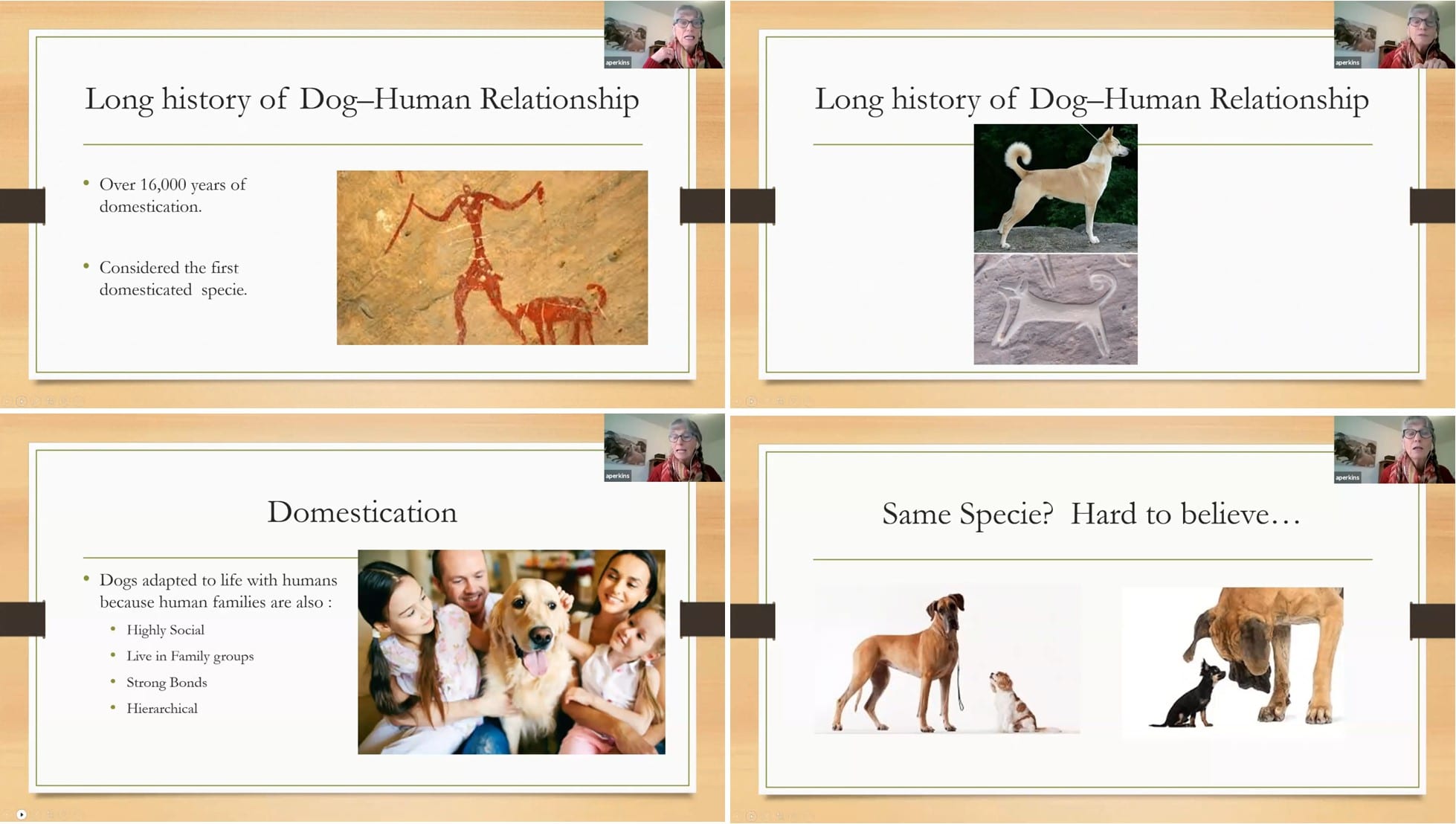 The anthrozoology program that Dr. Anne Perkins started at Carroll College offers two separate tracks: equine and canine. The career paths open to students from the different tracks vary significantly. While both tracks focus on training humans and their animals to form healthy relationships, the range of possible uses for dogs far exceeds those for horses. Dogs are small and adaptable enough to live alongside humans. They have some extraordinary sensory capabilities, such as smell, and form strong life-long social bonds that enable them to assist people in unique ways.

What Goes in Must Come Out.

As the saying goes in the biological world, what goes in an animal, must come out. And what comes out can tell a great deal about not only what goes in, but the condition of the animal through which the food has passed. Yes, poop tells all. People who work with animals know that regularly examining their liquid and solid “leavings” is an important part of good animal husbandry. Horses and cattle that share close quarters can easily pass bacteria and parasites, like worms, to one another.

The most common way to administer worm medication for horses is to use a paste that comes in a tube with calibrations that indicate the amount needed by the weight of the horse. Most horses don’t like the taste nor the method in which it is applied, as you will see in Brandon’s video.

In our last episode Mackenzie and Michal had a romping good time teaching the DIVAS to stand on mats! This behavior is great for having animals stay in one spot for doing grooming. And apparently, the DIVAS love to just do it for fun!

Mackenzie and Michal also reviewed grooming with Canner, talking about how the long and winding road from his being terrified of hands and people to actively seeking pets and even having his teeth brushed! 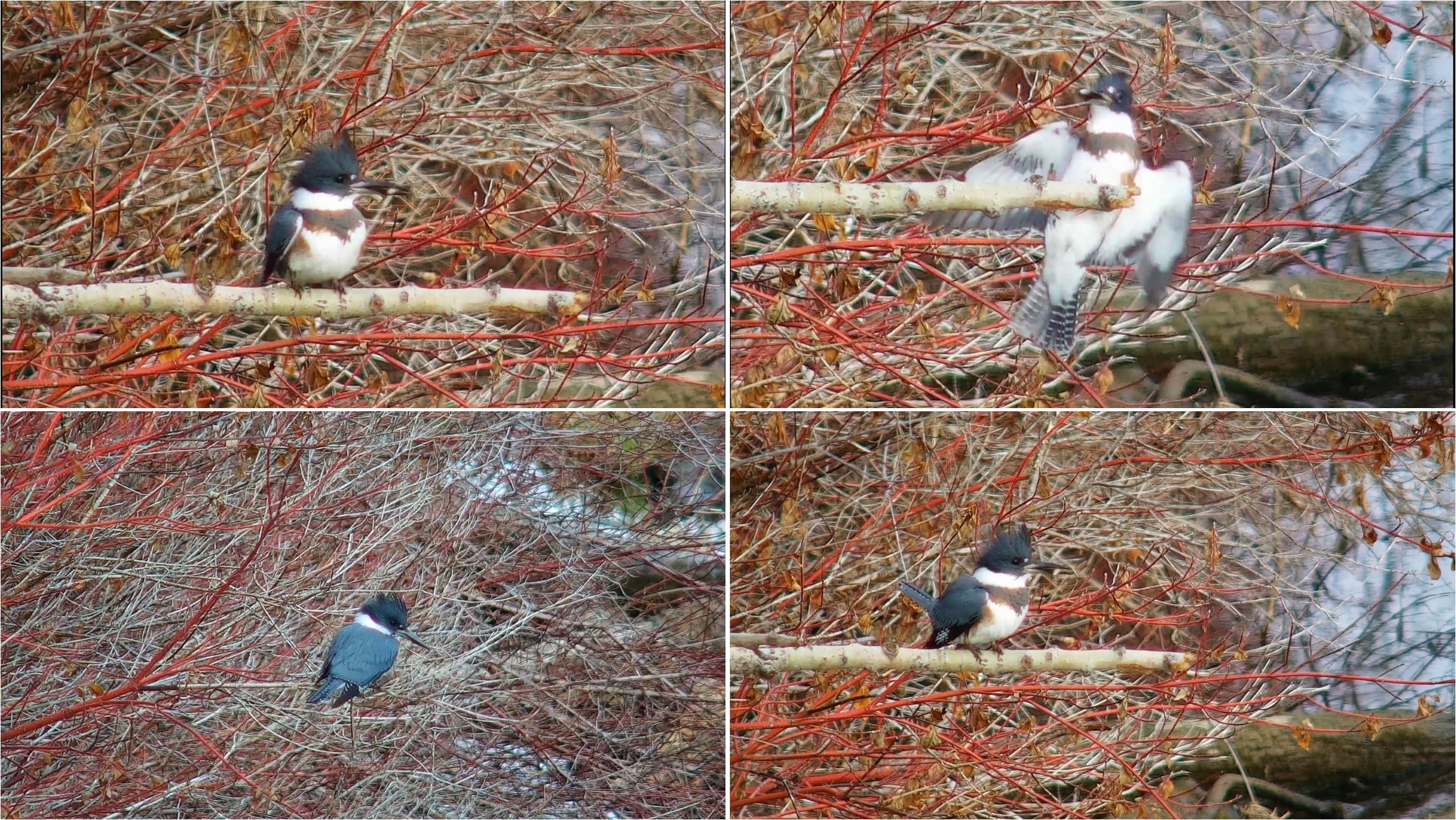 Our elaborate (as in “a downed cottonwood limb”), costly (as in “free”), and difficult to install (as in “nailing it to a fence post”) Bitterroot River Kingfisher perch is performing its job beautifully. Mr. Kingfisher has been recorded using it on a number of occasions since we installed it last December. This past week, we were excited to see Mrs. Kingfisher use it as she busily caught and ate a late morning meal. Mrs. Kingfisher is easily distinguished from Mr. Kingfisher by her showy chestnut bell band and side stripes.

War Declared at the Ospreys' Nest 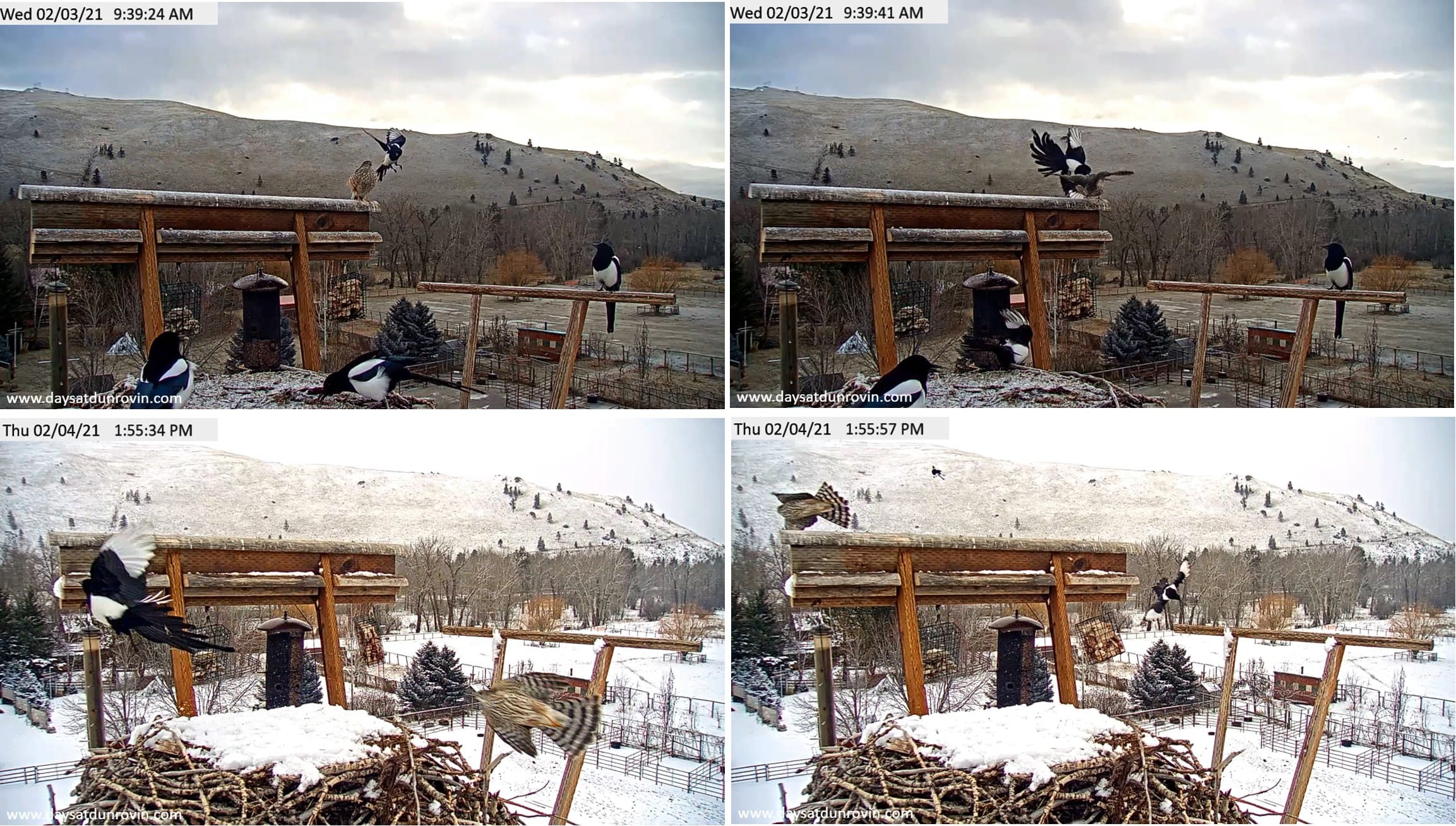 That handsome young sharp-shinned hawk thought that the Dunrovin ospreys’ nest was his own special hunting grounds until the local magpie population took exception. His frequent stops at the nest were just getting to be too much, as it interrupted the magpie’s parliament gathering while dining on the suet. Disgusted, they ganged up on him. War broke out with two days of combat - and the hawk has not been seen since!

During Monday's broadcast at MontanaSocials.org, the following guest sessions will be broadcast:

We will host more special guests in the coming weeks with a greater emphasis on dogs. Dogs in Montana have some very special roles, such as dealing with grizzly bears and sled racing!

What a temperamental winter we are having this year. Last week we saw temperatures in the 40’s and next week promises temperatures below 0. This is, of course, what makes creating these ice art structures so much fun. They are ever changing before our eyes with not only the temperature but with the wind and snow as well.

Right now it looks like a rickety, bearded “Old Man Winter” ---but at night, he seems to warmly welcome us. The coming cold is sure to change everything!