It was a quiet week for the horses and people at Dunrovin during the Thanksgiving Holiday. While the resident turkeys may have kept their distance, several other birds gladly took center stage. We added a new bird to the Dunrovin bird list. Mrs. Kingfisher finally found the new perch we installed specifically for her, and Ruby, our resident red tailed hawk posed for photos on the ospreys’ nest perches.

A Delightful and Unique Songbird Appears at Dunrovin

While the American Dipper may not be the most beautiful bird with its rather drab gray color, stocky build, and long legs, it most certainly is one of the most interesting birds in North America. It is the only truly aquatic songbird and has perfectly adapted to finding its food in fast running water. Unlike ducks, it does not use its feet as paddles. Rather it uses its wings to swim and its long legs with its feet of sandpaper to walk along stream bottoms. One of its truly humorous characteristics is the way it bobs its body up and down. There is far too much to convey about American dippers in this blog, so we encourage you to visit Cornell University’s All About Birds website to read about these amazing American Dippers. In the recording below you will see this little bird catch a minnow in the Bitterroot River right off of the beach where Dunrovin guests swim. Let’s hope that its success brings it back for more foraging in front of the river webcam.

The Ravalli Republic, the local newspaper for Ravalli County which encompasses most of the Bitterroot Valley, recently did a very informative article entitled American Dippers a Common Sight in the Bitterroot.

While we promised to report back this week on the results of the Thanksgiving Survey, we are going to keep the survey open for another week in the hopes of getting YOU to respond. We received a lovely email from one respondent saying how much she enjoyed doing the survey as it had started a wonderful evening of reminiscing with her husband. Take a trip down memory lane and tell us about your Thanksgivings past and present! Please complete the Dunrovin Thanksgiving Survey this week so we can share next week.

Surveys can give us lots of fun information about all aspects of Thanksgiving. You may want to visit the New York Time Thanksgiving Survey about where people spent this Thanksgiving, the Farm Bureau Survey about the costs of a traditional Thanksgiving dinner, or the Food Network Survey that they conducted in July so they could to find out what people were planning to eat for  Thanksgiving and publish the results in their November magazine.

Wouldn’t you know that right before Thanksgiving when everyone has delicious food on their minds, Brandon Carpenter and SuzAnne would strike up a conversation about worms in horses and cattle. Well, November not only means the end of the harvest time which we all celebrate with Thanksgiving, but it brings the freezing temperatures that prompts people with livestock to implement an important part of their animal health maintenance routine: de-worming. Brandon took us along with him last Monday as he gathered his herd and made sure that they all got their annual medications to eliminate parasitic worms that would sap their nutrition and degrade their health.

Oggy continued to recover from his bout with cellulitis which kept him out of the round pen with Ashley. Last Monday, Ashley and Brandon reviewed recordings of the sessions that Ashley had conducted alone with Mystery. Working independently of Brandon was very informative for Ashely as she clearly identified the specific training techniques that she did not completely understand and had yet to perfect. This debriefing session with Brandon really helped Ashley progress in her horsemanship training.

Just when we were getting frustrated with hearing and even catching a glimpse of that little female kingfisher who has been hanging out in the vicinity of the river webcam and who resolutely refused to use the new perch we installed specifically for her pleasure, she made a short appearance on the perch. Hurrah! Let’s hope she makes it a habit!

All last summer we were treated to Ruby and Luc, the resident red tailed hawks that set up a nesting sight at Dunrovin and provided our several photographers with many opportunities to photograph them. They were especially interesting because Luc is leucistic with brilliant white feathers instead of dark brown and Ruby is robust and very dark. These wonderful photos by Louis Matteau will remind you. 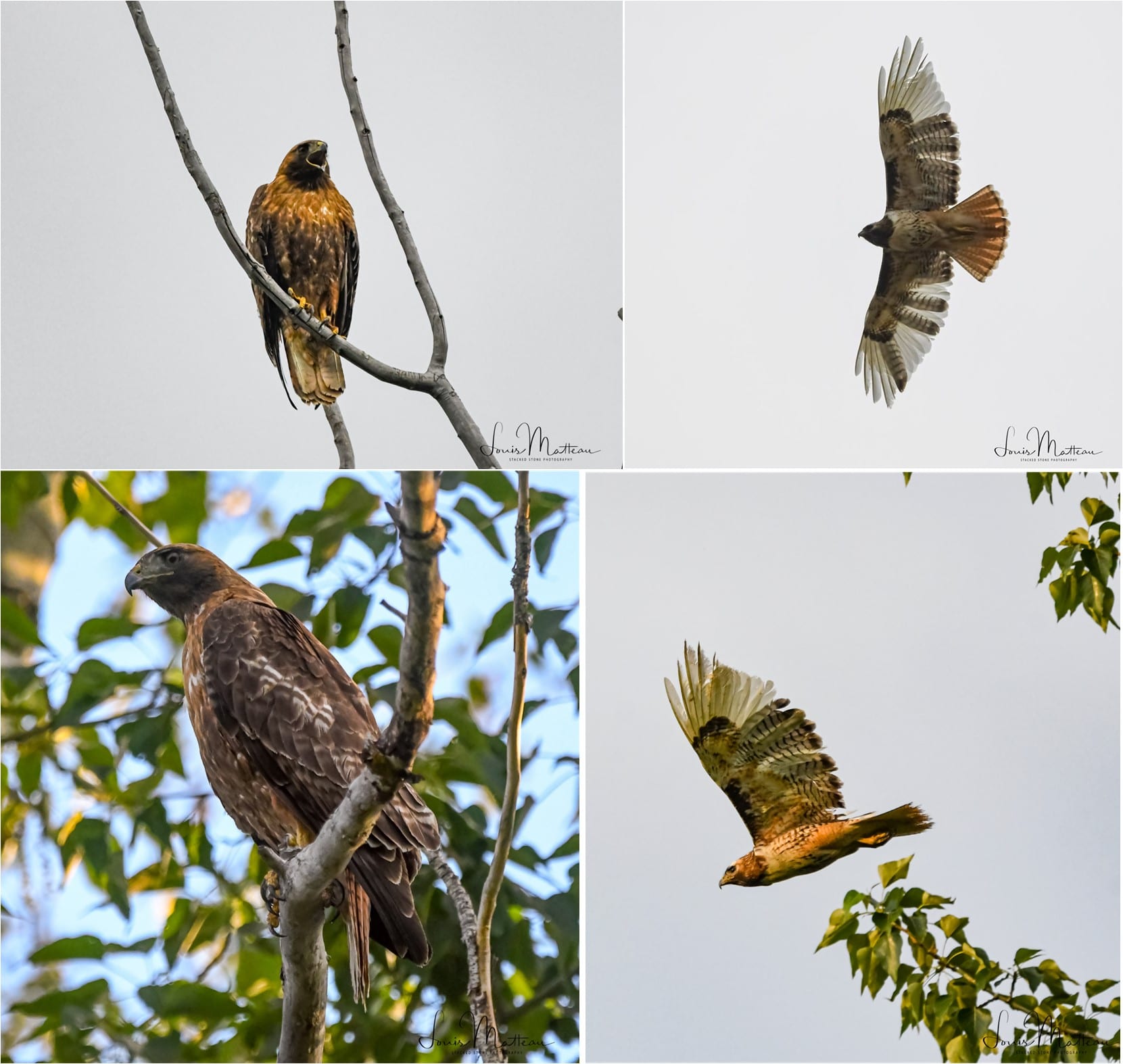 This last Saturday, she was seen several times on the osprey’s nest. Here are some photos and a recording of her landings and takeoffs as seen by the nest’s backup webcam. 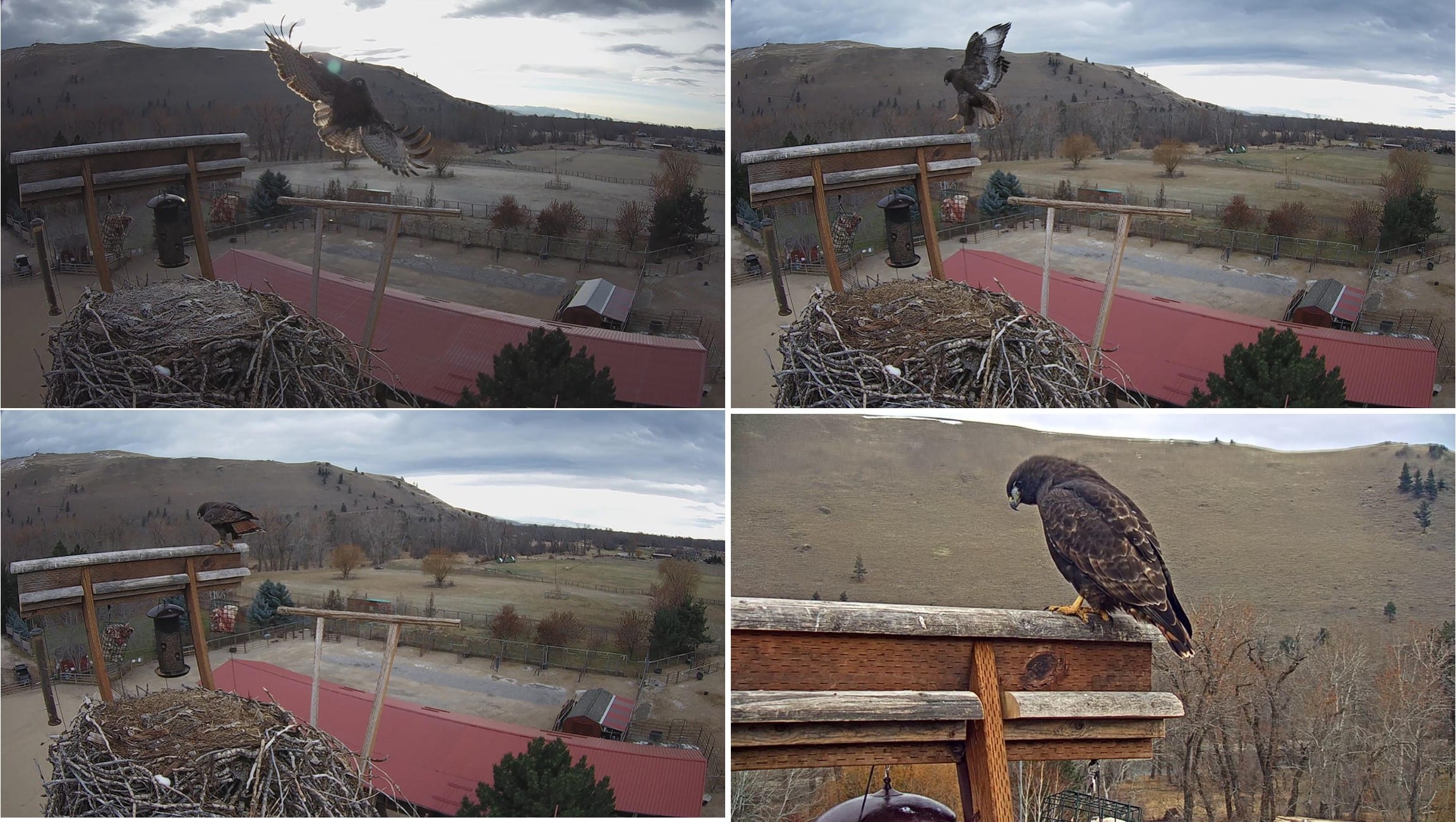 On the last episode of Clicking with the DIVAS, Gertie and Maude made it very clear that Donkeycour is their calling. They may even like it more than sneaking into the hay barn, as evidenced when Gertie turned back from going to the haybarn to have one last go at climbing over the log!

Next episode we will continue working on chaining behaviors and see if we can get stronger STAYS, GO TO MATS, and OVERS. We will also keep working on our new GO AROUND behavior while having fun romps around the barnyard. If you have any ideas for affordable or easy to make objects for the DIVAS to practice their climbing on, please share them in chat! And be sure to tune in this Sunday at 4PM for another grand session of Ranchcour!

Talk about blending in with the background! It is impossible to count all the collared-doves in this photo until you watch the short recording and see them move. Try it! 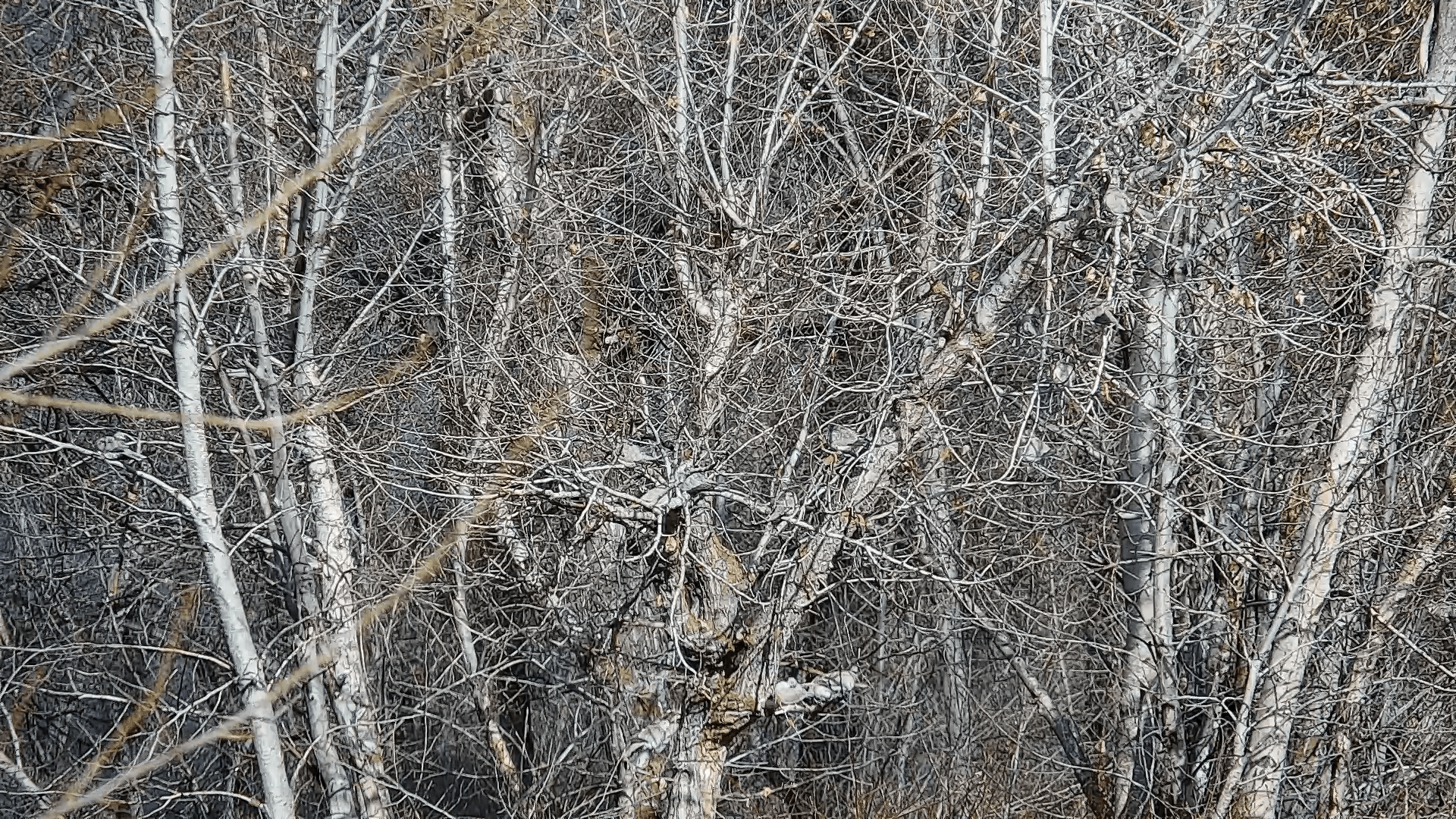 Thanks for joining us at the ranch and stay tuned for some holiday fun during the month of December.

Question for the Week: How many Eurasian Collared-Doves did you count in the photo?