This is the week for Dunrovin to pull out all the stops and begin to ‘don its gay apparel’ for the holidays.  It’s a multi- stage process as we like to stir up our traditional mix.

christmas on our minds

James and SuzAnne Cogitate About Christmas

“Experiment” is Dunrovin’s middle name. We love and honor traditions,  but we also believe that one should be experimenting with the way that annual traditions are realized. Yes, Christmas lights are a great tradition, but that certainly doesn't mean they have to look the same each year.

This week SuzAnne and James brought the [email protected] members into discussion about getting Dunrovin decorated for the holidays.  One thing for sure was decided: our newest residents from Florida, the beautiful pink flamingos, Twinkles and Sweetie, will definitely be featured in our Christmas display!

Ever since installing the river webcam in late 2018, SuzAnne has been enchanted by the wonderful moonrises that sometimes appear on the camera. It can be a little tricky as she has heretofore been simply guessing  when and where the moon will rise above the mountain ridge east of the Bitterroot River. Oh, yes, she has been using websites that give the times for moonrise and moonset on any given night in the general area; but they are not specific enough to be useful for setting the webcam in exactly the right spot.

So, SuzAnne has turned to the one person she knows will get it right each and every time. John Ashley’s nighttime photography is beyond words. He consistently positions himself in just the right spot at the right time to create  magical photos of some of Montana’s most majestic landscapes against dramatic  glittering night skies. If you have not yet seen his work, please visit his online fine art gallery of landscapes.

John’s response to SuzAnne’s email request arrived with the same wily sense of humor he often displays when giving a helping hand. Did she REALLY want to go to all the trouble that he does to figure it all out? This will require downloading special applications, doing some trigonometry, and becoming something of a Google Earth expert. He even provided her with “Cliff Notes.”  We can all guess what she will be up to during the next month after dusting off her slide rule!  We will have to wait until the next full moon to see if she figures it all out.

According to the old Farmer’s Almanac, November’s full moon was traditionally called the Beaver Moon by many Native and colonial Americans because November is when beavers begin to take shelter in their lodges for the long winter.

About two years ago, the Klocke family moved into the house immediately west of Dunrovin Ranch. While we have had nothing but pleasant encounters with them since, we have not really gotten to know them very well. Fortunately that is all going to change as their daughter, Chelsea will spend weekends here at Dunrovin helping us to feed the barnyard animals and the herd in the winter field. Meet Chelsea, in her own words, below:

“Chelsea is a native Montanan, raised in Butte and Frenchtown. She decided to strike out on her own in 2009 to pursue an Environmental Science degree at the University of Oregon. She has always had a passion for wildlife, which was rekindled while volunteering at the Cascades Raptor Center during her studies. From that experience she gained a deep appreciation for birds and decided to pursue wildlife biology as a career. Over the past several years she has worked on a variety of wildlife monitoring projects, primarily in the Pacific Northwest, but also in the deserts of Southern Utah. Some species she has worked with include Northern Red-legged Frogs, Marbled Murrelets (an enigmatic seabird), and Bighorn Sheep. In her spare time she enjoys birding, writing, discovering new music, and cuddling with her pet corn snake Skittles. Her plans for the future include more wildlife work and hopefully pursuing a Masters degree. For now, though, she is delighted to be working this winter at Dunrovin, taking in ranch life under the Big Sky and spending time with family here in Lolo.” 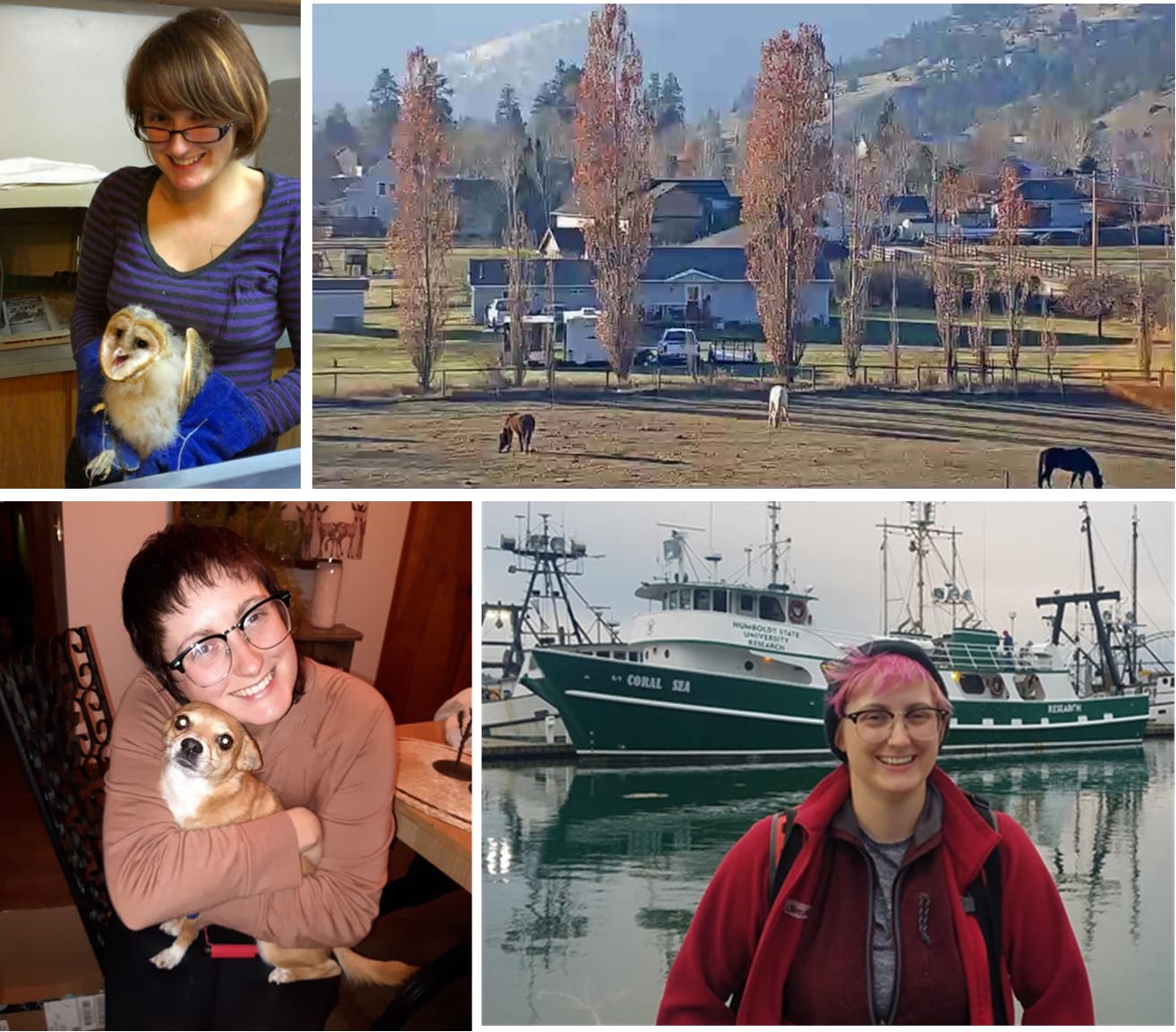 As you can see, she is a perfect fit for Dunrovin and we hope to lure her into telling us all some stories about her wildlife and bird rescue adventures.

During a recent session with Brandon at his Hashknife Ranch, he showed us moving and sorting cattle using a young bay mare that he was training.  SuzAnne and he then discussed what a great opportunity it was to have a horse in training put to work with cattle where many refined movements on the part of the horse would be required to accomplish the job.

This past week, Brandon gave us specifics about the skill set of a competent ranch working horse and how important this kind of training is for horses even if they will never be used again to do ranch work

Ashley is learning by leaps and bounds!  Between coaching sessions with Brandon and her solo efforts, she’s becoming a powerful trainer. Her independent sessions can be most beneficial in several ways. In the moment, she now quickly distinguishes between those things that she clearly understands from those that cause her to hesitate or stumble in their application. By reviewing the recordings she can learn even more through watching Mystery’s reaction to her instructions and body language. Finally, by reviewing and discussing the recordings yet again with Brandon, she is able to deeply understand the process and make big strides. We got to see this process in action with Ashley and Brandon this week.

Last time on Clicking with the DIVAS, Gertie and Maude had a grand time parkouring around the barnyard. They continued to work on offering more behaviors for fewer rewards, a process known as chaining. They also worked on three new behaviors – GO AROUND, STAY, and MAT. We were able to add MAT into their chaining training and they loved it. But it also wore them out, as Maude decided before the end of the session that rather than going over logs, she should bay! Listen to Maude “tell it how it is” below:

Next episode, we will ramp up chaining even further, and do our first rounds of Parkour with one handler and donkey team facing off against another. We may also try adding in our other novel behavior, GO AROUND, to the mix. Tune in to see if Maude can handle the pressure, or decides to recommit to her singing career! See you Sunday at 4 PM mountain or on the rebroadcast on Monday!

The holiday season has just begun. Be sure to join us each week to help us celebrate.

Question for the Week: Have you put up your own Christmas Tree Yet? If you have, please send us a photo!