As we come to the end of 2020, I feel fortunate to have gotten to watch Maude and Gertie, the donkey DIVAS, grow and change. They’ve provided a great distraction and relief from the Pandemic for me, and we’ve taught one another a lot over the last six months.

The DIVAS find their trot 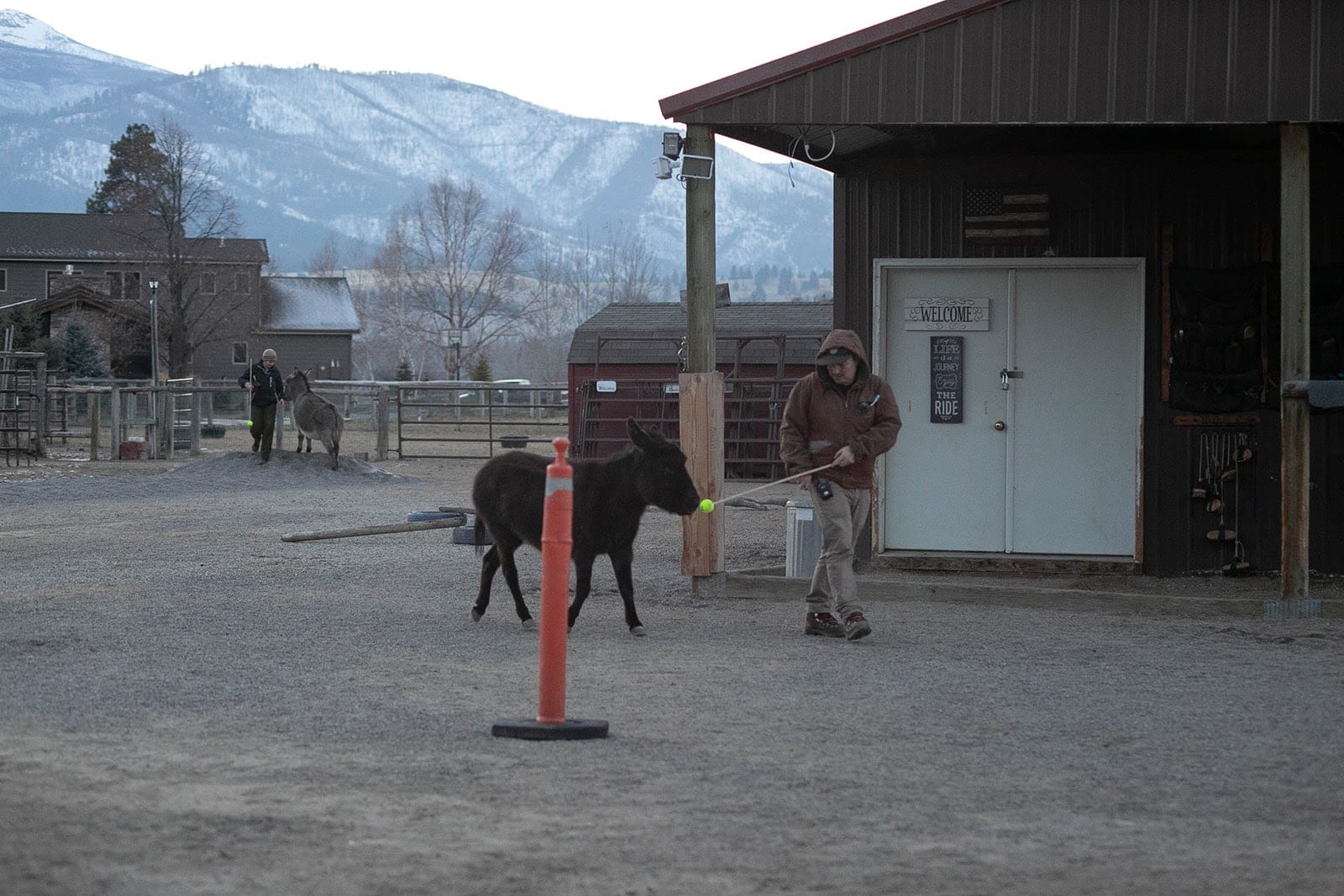 As the year is wrapping up, SuzAnne asked me to reflect on the last six months of DIVA training. Like many of us, the end of 2020 has found me in a bit of a stupor. I have my routine that consists primarily of working from home, exercising at home, eating at home, and so on. At this point, my mind has just checked out a bit while I wait for the pandemic to end and hope that no one I love winds up too worse off for it.

It took some work to emerge from this fog long enough to figure out exactly where we were with DIVA training six months ago. In fact, I had to go back to the blog to find out!

I also got curious about how long ago Michal and I had resumed training the DIVAS. Apparently, we are over a year into working with them. They were so excited when we started back up after several years hiatus from clicker training, it’s palpable! Take a look at our first session in the fall of 2019 and you’ll see.

It’s fun to look back and see how far they have come in a little over a year of weekly training. Gertie has really gotten much better about mouthing for attention and strengthened her ability to contain her frustration when things do not go precisely as she planned.  And Maude has really sparked up. Her enthusiasm is so high now that she even told off Gertie last week before our Parkour session! 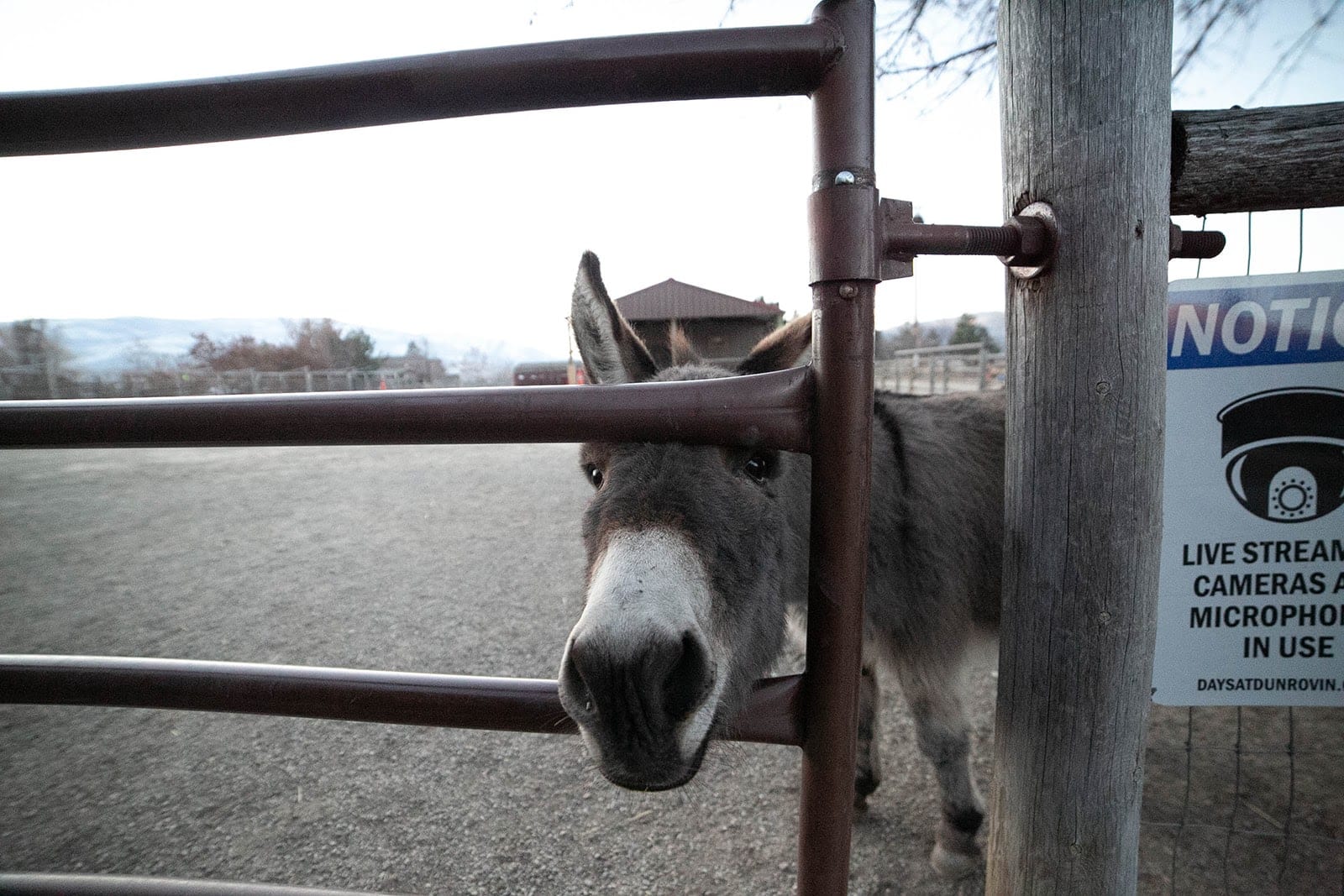 It’s worth taking a moment to watch the difference in both of these great donkeys between the last video and this most recent one:

Six months of donking around 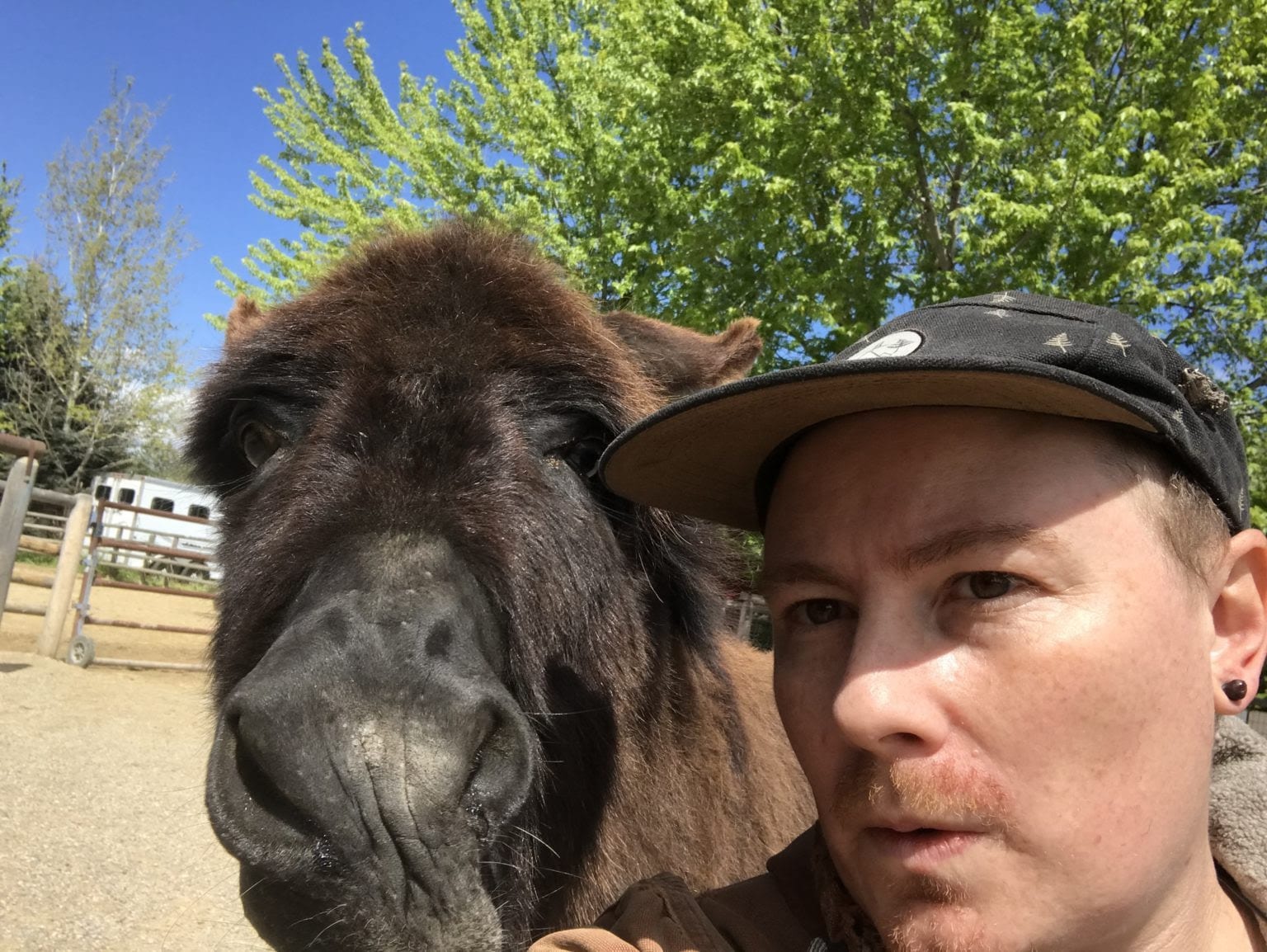 But I digress – six months ago, in June of 2020, we were in the throes of training the DIVAS to count by matching the number of objects in a feed trough to the number of dots on a board. We never quite made it to the point of being able to run a double blind test on their counting. It seemed to stretch their brains and mine to the max. I think that if we had started that game earlier in their development, we would have had clearer results, but that is ultimately speculation on my part.

Training counting was a fun and difficult way to try and show that our animal companions are capable of much more than we give them credit for. In fact, that’s true of all the animals that sit in what we think of as the background of human lives. We have learned so much about animal cognition in the last 30 or so years. We know that corvids can count and teach each other all sorts of things, including language. We have demonstrated that elephants mourn their dead and communicate over vast distances in part because of an ability to “hear” through their feet. And we know that our own canine companions have an incredible ability not only to understand language, but also to read our facial expressions, anticipate our behaviors before we do, and even help  by sniffing out things like CORONA virus, something we will never be capable of doing.

I think many people would look at the training Michal and I have done with the donkeys and ask, “Where is the value?  What’s the point in seeing if donkeys can count, use language, or just run around a barnyard walking over logs and going around cones at your behest?”

To those folks, my response is this: The way we are brought up to be with animals, to see them, is a lot about how we are socialized to see the world. By working with the DIVAS to see what they are capable of, what they enjoy, we get insight into their abilities. We get to appreciate them more for their range of capabilities, and not merely their utility to us. We see how much more like us they are, and in so doing, we get a truer view of a world that is much brighter than the one I was raised to believe existed. 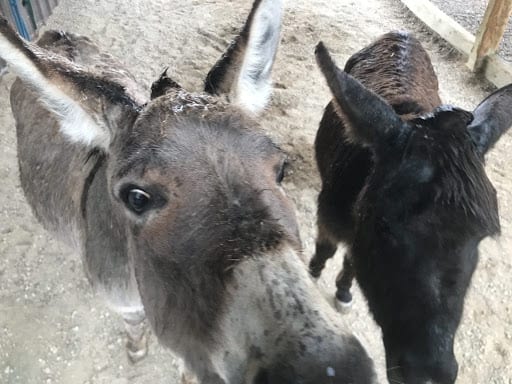 Back in June I was working to help with protests in Missoula around the death of George Floyd, Black Lives Matter, and local threats from white supremacist militia groups. And I was stewing again over the ways in which I was raised to treat animals and how they went very much hand in hand with the culture of racism that is still far too alive in this country.

As a white boy growing up in Montana, I was expected to discipline and teach my animal friends lessons as one of my chores. Among my family and everyone we knew, the consensus was that the way to do this was through violence. We didn’t say it that way, but that is what we did. We had other names to just justify our actions. Violence was couched as discipline, as how dogs and horses learn, but I was made to hold my dogs down until they submitted, to kick and choke and even bite their ears. I grew up and learned that many other kids were taught the same things.

There is a lot of bad information out there about training animals, and I think that it persists because what we are really affirming is our culture’s worldview. We believe that what is important is power. We attempt to affirm with our animals that conflict determines who gets to be in charge, who is important, and that violence and intimidation are what’s important because they are the only way to maintain one’s position in a power structure. (The hens and their “pecking order” taught us this – We can learn from animals!) It was that ugliness, that mentality I saw casually emblazoned across the face of George Floyd’s murderer, and I recognized it in myself and what I was taught as a child through the violence I was made to do to our animals. Through that lens, I came to exercise my responsibility to “teach” them. It hurt my relationship with them and only made it harder for them to successfully navigate this world.

When we practice these tactics with our animals and when we teach them to our children, we aren’t doing what’s best for anyone. We are simply affirming how we believe the world is, and it’s a sad and untrue story we are trying to make real. We are doing it against what science says is best for teaching, against what our conscience tells us is right, and, most importantly, we are teaching a way of being that, applied in other contexts to people we want to believe are ‘lesser than,’  gives us justification to be our worst selves.

I have been really fortunate to learn other ways to train. As an adult, I’ve learned to change another’s behavior without violence or fear. My best teachers have always been the animals who worked with me over the years. All animals deserve respect, patience, and a say in their lives.

So, I took a moment to reflect on how I was taught to treat animals and how I believe it reflects a wider and pervasive problem in our culture that ultimately keeps us all from a better world. You can read it here. 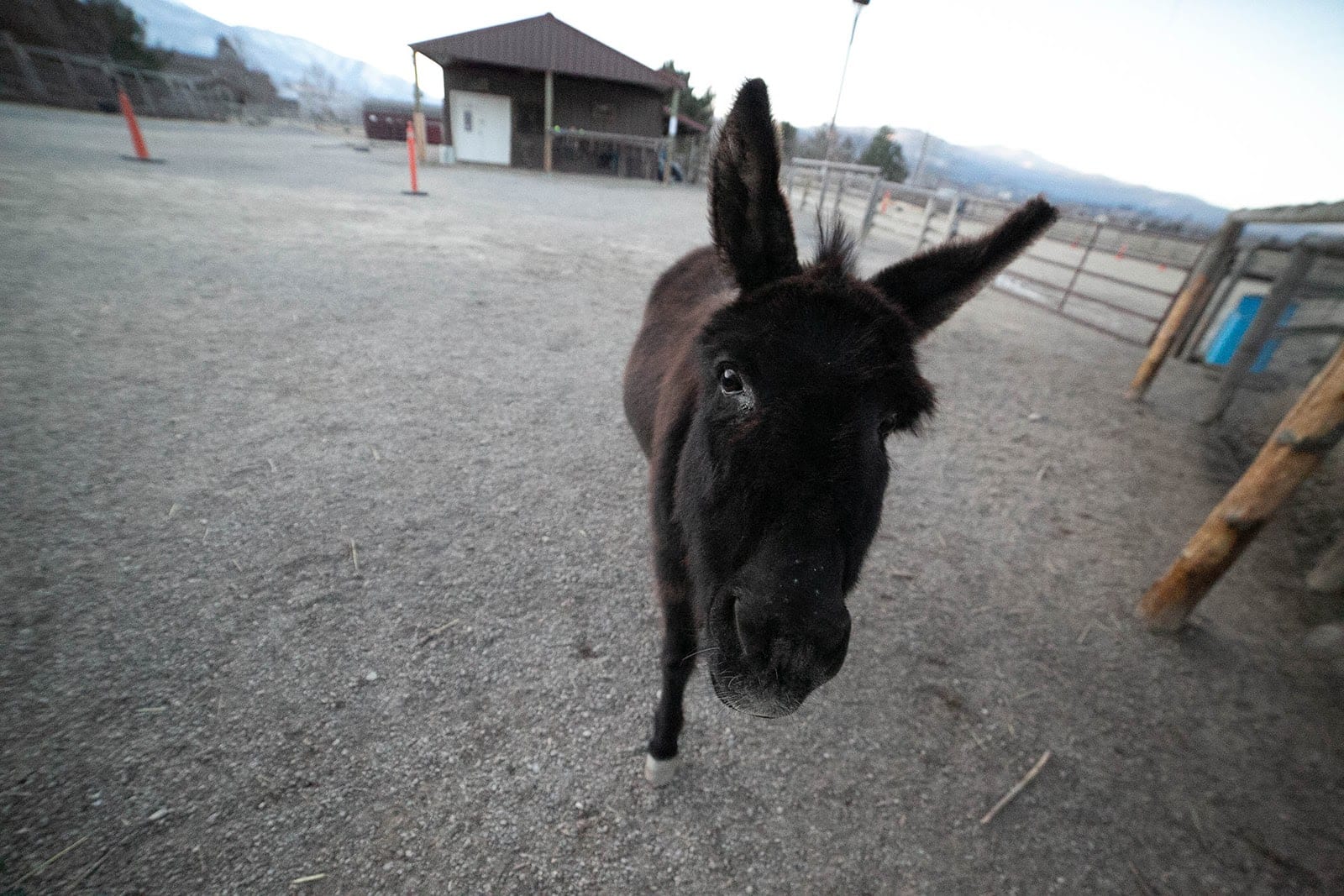 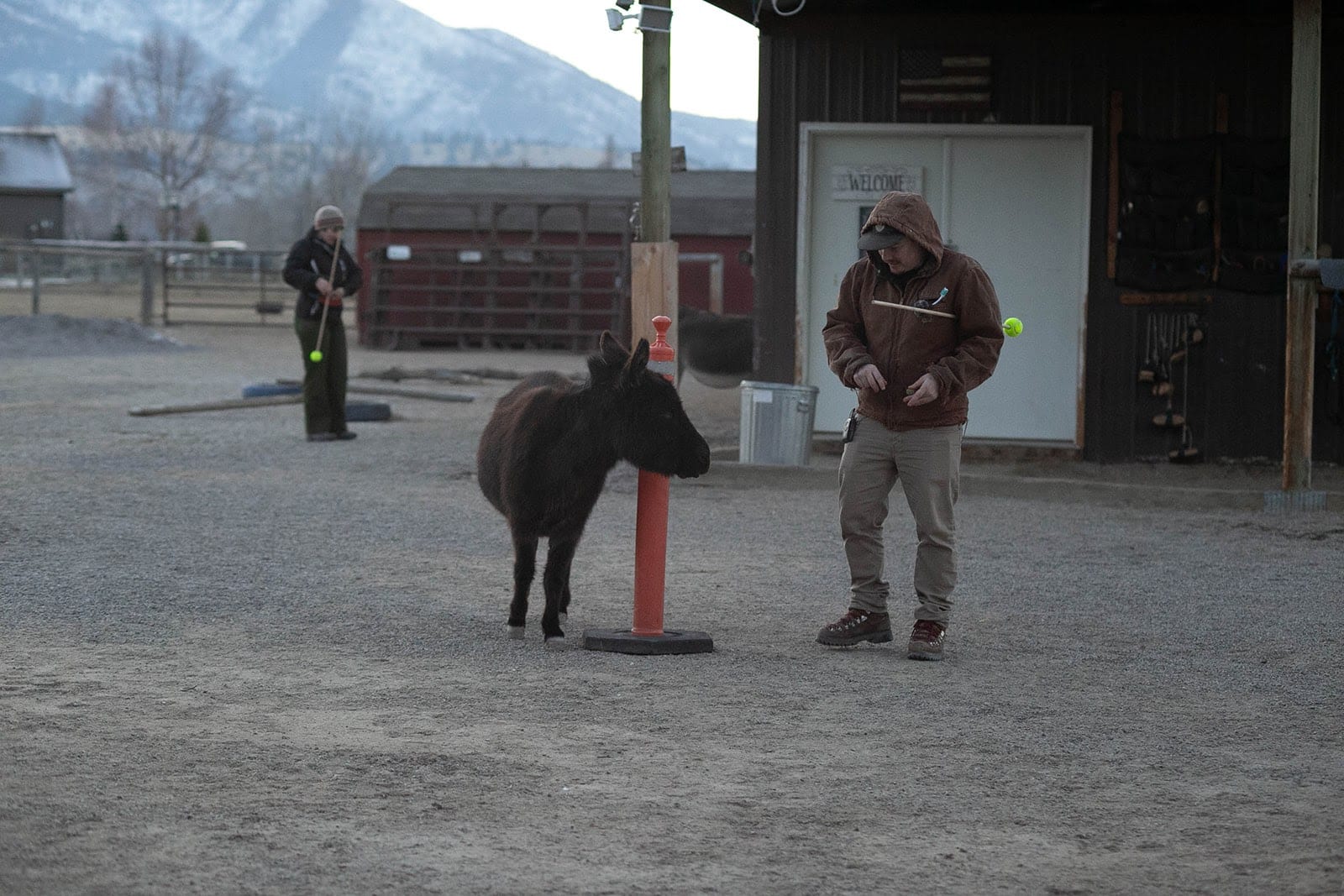 Before we ventured forth into donkey parkour, we took a crack at teaching some foundational behaviors that I had skipped in the DIVAS’ initial training. In July and August, I laid out some foundations for training that I would find helpful down the road. We worked on these as we finished up our counting training. If you’re interested, it’s worth checking out the last blog post here, which links back to the other blogs on foundations.

Also, you can see us working on counting and foundations in this episode:

By late summer, the DIVAS, Michal, and I were all getting worn out teaching counting. It had been a fun challenge, but with stronger foundations, we were ready for a new direction. We put it to a vote, and the Dunrovin community decided we should try Parkour. The DIVAS came to love this sport, and I’m sure would bay in gratitude for the folks who voted for us to work on it!

Parkour is a great animal sport because it lets us interact with our companions with a sense of adventure and fun. It’s important to make sure any Parkour training focuses on safety first, so we don’t hurt our animal friends. But at its heart, there’s an art to it that makes it a joyful thing. And it was great to see both donkeys come to love it over the last several months. 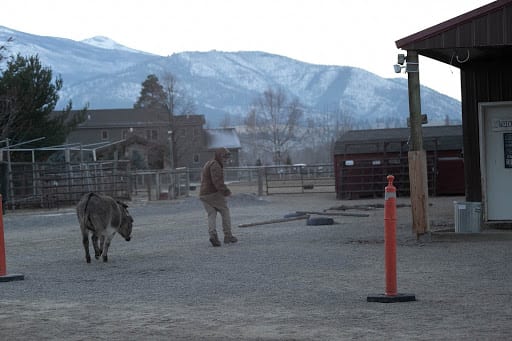 I asked Michal what she thought about training with the donkeys and she said she enjoyed seeing the DIVAS personalities develop over the course of training. When she first met them, Maude was shy but liked being petted – Gertie was mostly interested in if you had a treat. 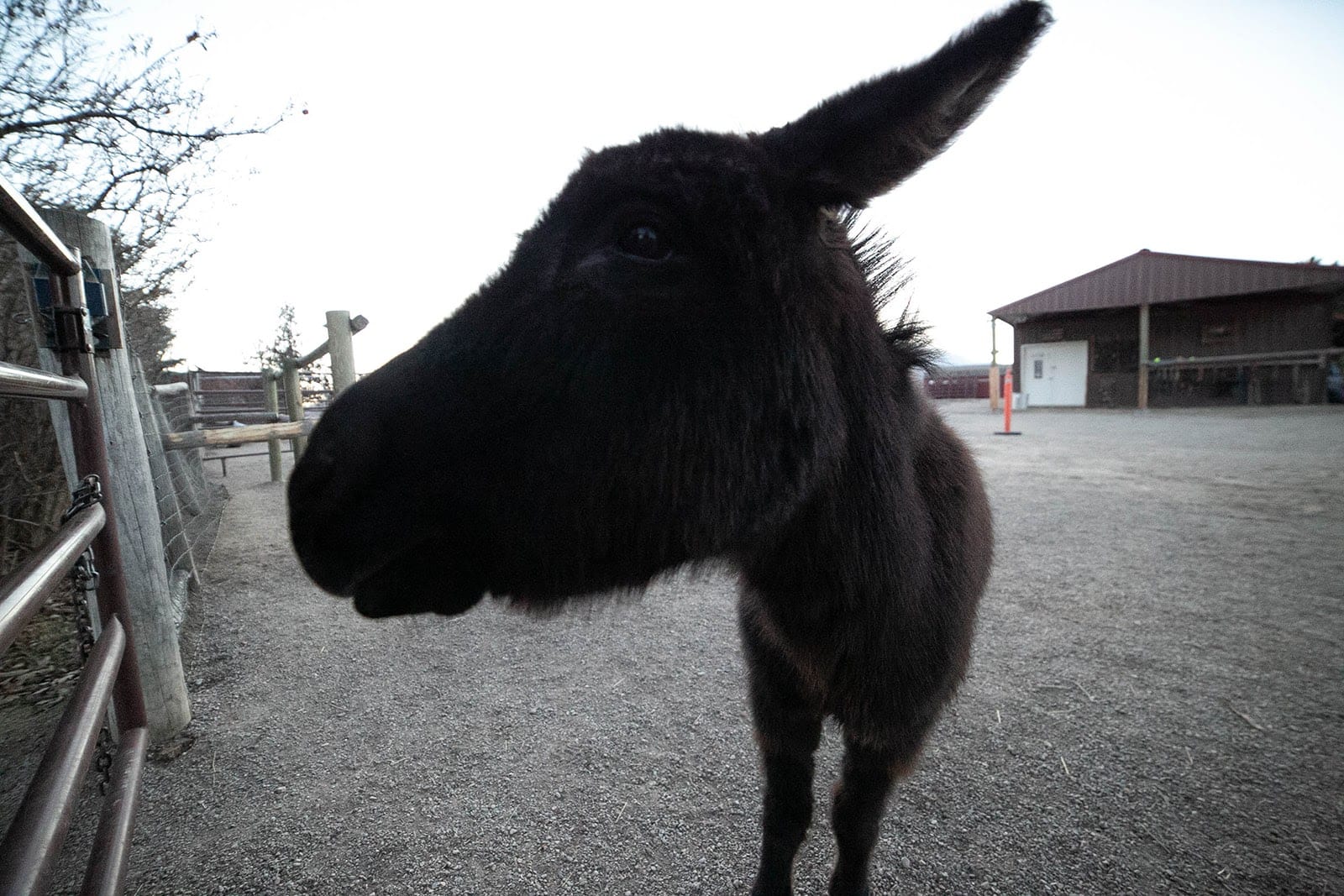 But over the course of training, they developed more preferences and talents. Maude started showing a love of learning language – specifically, the names of things. And her shyness morphed into a thoughtfulness and with a slight caution for new stuff. She especially loves training and likes to check out new things. She had such a time building up enough vigor to run, but now she runs or YEEHAWS enthusiastically. 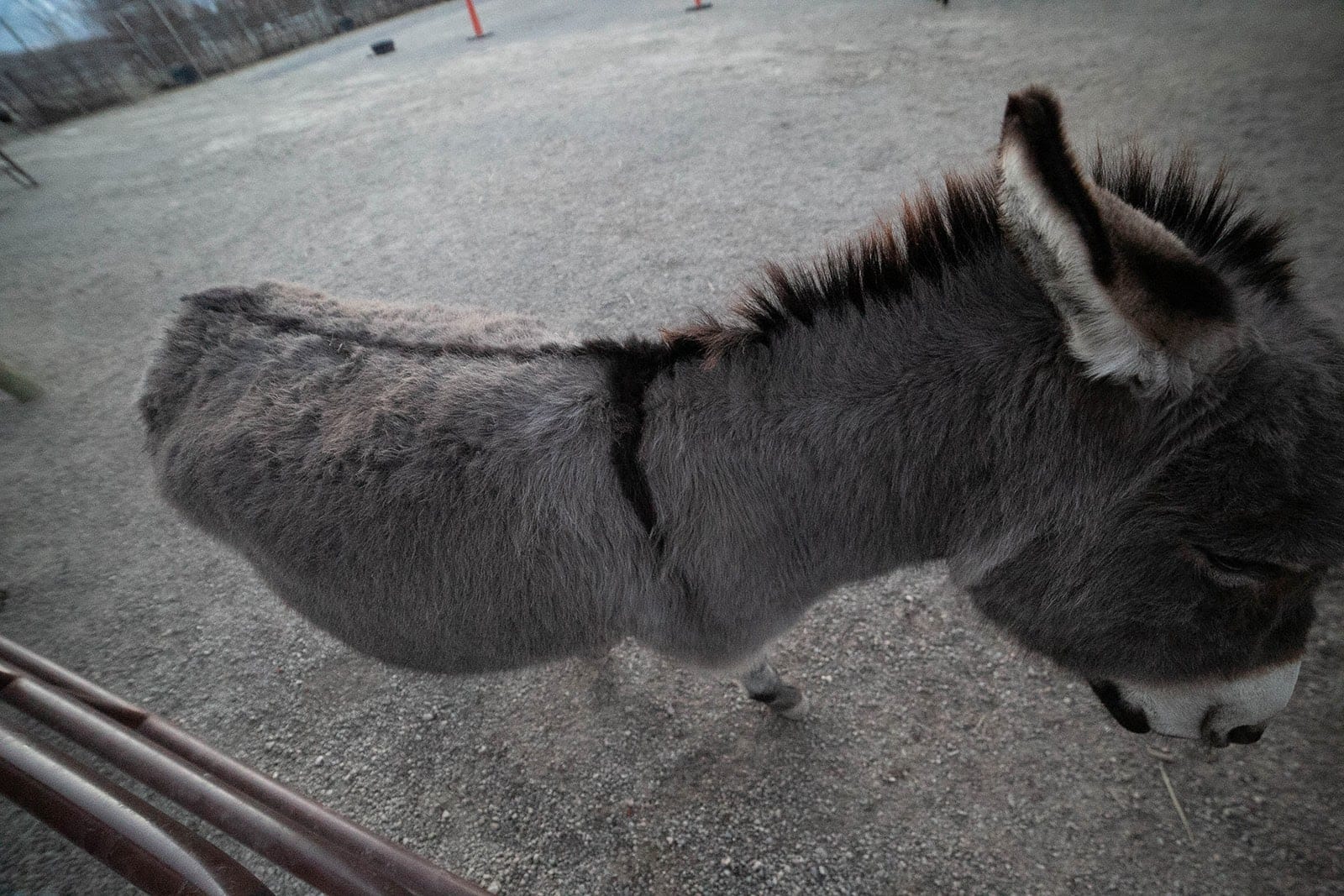 Gertie’s development has been a little less surprising but she has developed just as much as Maude. She’s much more tolerant of so much, especially her sister. She is more patient and willing to think about new things. She’s also become really tolerant of unstable footing. She’s become much less food-focused as she’s found a love of learning. This last ability was on display during our last training sessions when she kept leaving all the treats I had given her to eat while Maude was doing Parkour runs. Don’t get me wrong, Gertie loves some apple and carrots, but she has come to love Parkour nearly as much, or, dare I say it, more!

They’ve both learned so much. Maybe best, Gertie has learned to be nicer to her sister and Maude has started to stand up for herself and dare to have some preferences and try new things!

Here’s our last training session all together! We’ll keep working with them in 2021, but we might not be having so much of our camera time on it! 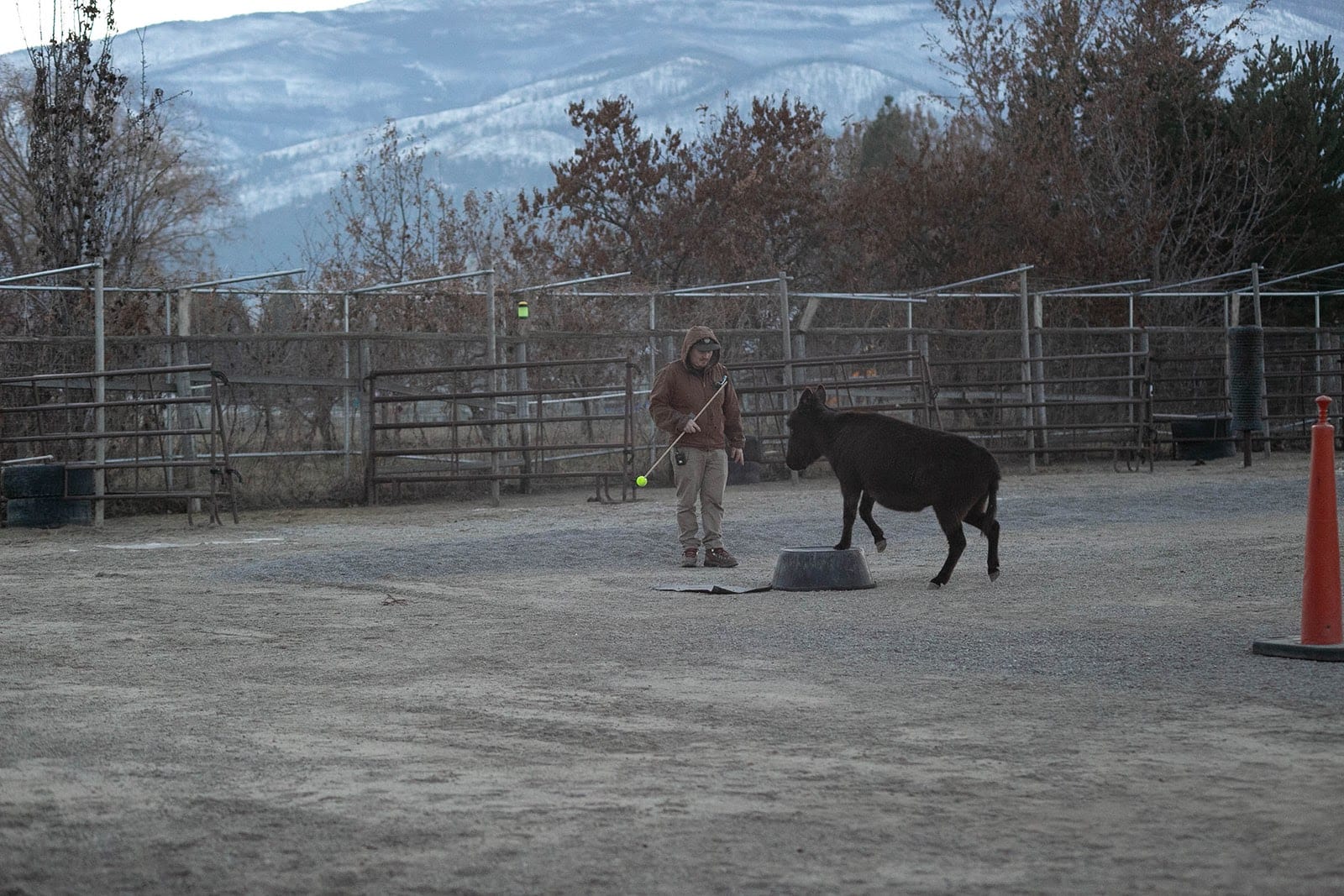 This Week on the Ranch

Ghost herd spotted in the mountains

Every once in a while, we get the pleasure of a visit from the ghost herd. “What’s the ghost herd?” you ask.   It’s the herd of wild horses that live across the Bitterroot River on BLM land. This ghost herd is not only a big deal to our community but is loved by all of Missoula. You can read more about the herd in the Missoulian.

Sandpiper on our beach

The Sandpiper is a funny bird with a long beak and, at times, bouncy behavior. One recently appeared on Dunrovin’s beach for a brief visit. Watch their comical bob in the video below: